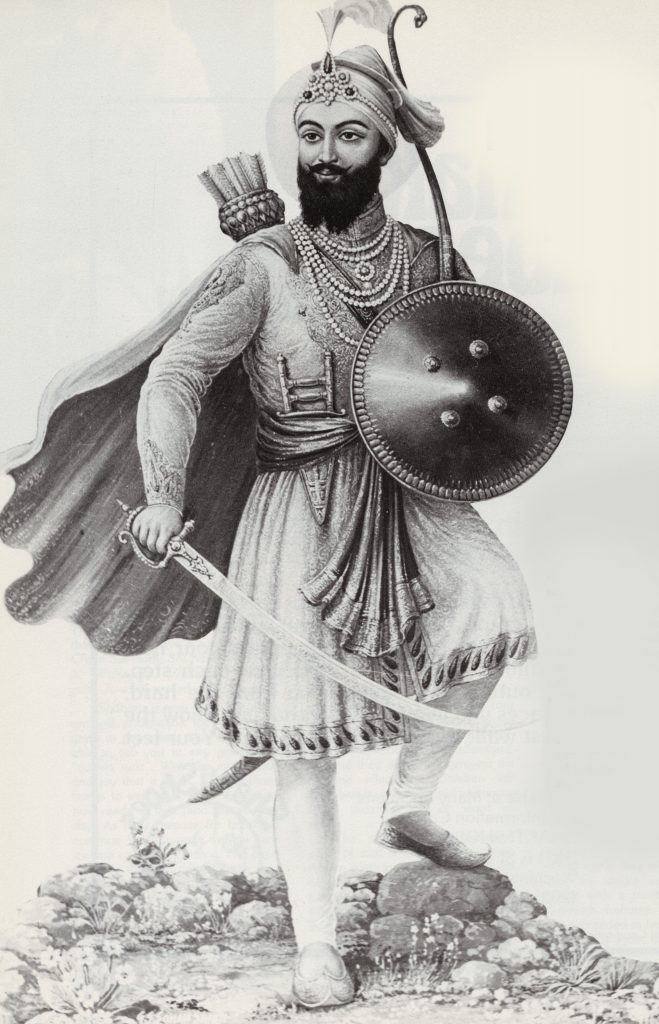 This article was written by Ravi Har Kaur Khalsa as a story, imaginging what it might have been like to be in the company of the Sangat on Baisakhi Day, 1699.  This was originally published in Sikh Dharma Brotherhood in the Summer of 1977 (Vol. III, No. 2).

…Baisakhi Day, 1699, it was an eventful day, to be sure, for all people. The harvest was good that year — we had just the right amount of rain and sun to yield a large crop of winter wheat — and all were in fine spirits. The day dawned with a cloudless sky and the sun shone warmly. The breeze was soft and carried the sweet scent of early spring.

I can remember it all very well, because I woke that day feeling different. I supposed it to be excitement for the Baisakhi Festival or maybe just the special energy one experiences on a new spring morning — one of those mornings when the first thing you feel is a cheerfulness and a gratefulness for being alive.

I rose as usual, before dawn, bathed in the river and went to my Hindu temple for the morning prayers. Afterwards, as the sun rose higher and higher in the azure sky, the city of Anandpur began filling with visitors arriving for the Baisakhi Harvest Festival. From all over the countryside people came to join in the festivities and the road into the city was soon overflowing with oxcarts, people walking, and children running and playing alongside.

I finished my morning chores and went outside to join the crowds. The level of excitement and gaiety continued to rise and for a while I amused myself just by strolling along, watching and taking in the mood and spirit of the people. As luck would have it, I spotted a dear Sikh friend of mine, Kamala, and her husband Himmat, across the way. I made straight for them as I could not think of anyone I would rather spend the day with than those two. She and I had known each other for years and though they were Sikhs and I Hindu, it made little difference.

In fact, we spent much time talking about the Sikhs and she told me many stories of their Gurus and of Guru Gobind Rai. I always enjoyed those times we spent and they gave me a deeper understanding and respect for the Sikh faith. I have never seen a happier married couple, nor a happier family — they have several children — and I know their devotion and love of God were the root of that happiness.

So when I finally came upon them and we had greeted each other, they told me that Guru Gobind Rai had sent out a request that all the Sikhs from the city and the surrounding countryside for miles around gather that morning together. They asked if I would like to come along, and since the day’s activities had not yet begun, and too, since I had a curiosity about this Guru Gobind Rai of whom I had heard so much, I agreed to accompany them there.

The area designated for the gathering was an open field with only a few shade trees on one side. What little shade they provided was already taken up by people anticipating the heat of the morning sun. At one end was a small hill with two or three tents staked on it and these we supposed were for the comfort of the Guru.

As we approached the area, we were laughing and talking as old friends do, until suddenly we sensed a change in the air. There were thousands of Sikhs, and others as well, converging on the meeting place and though the excitement of the Baisakhi Festival pervaded, there was here an undercurrent, something more subtle and yet obvious. There was, amid the excitement, a feeling of urgency, of expectancy, and a touch of mystery. It was felt by everyone.

Our own thoughts turned from the festival to what lay immediately before us. Why had Guru Gobind Rai called for the gathering? What special words of Truth would we learn from him this day?

We seated ourselves among the many others, rather near the front and we waited, silent, each with our own thoughts. I could sense the love and devotion my two friends had for this Guru and while I myself was anxious to hear what he had to say, I could feel that they waited with an anticipation, and a longing of their hearts . . . they sat quietly in meditation.

It took a long time for everyone to arrive and be seated. The spring sun grew hotter and the breeze that had blown earlier now offered no relief as we sat waiting. The flies began to get pesky and beads of sweat soon covered the brows of many. We sat… we waited.

Finally, all who seemed to be coming were seated and quiet. And then, from one of the tents emerged Guru Gobind Rai.

All eyes turned towards him and thousands of people gave him every ounce of their attention. I had never seen him before and my heart now pounded, as I first laid eyes on him. There was indeed something incredibly special about him. He was not a tall or large man, as I had pictured, yet his projection was strength and fearlessness.

He was in full dress of royal blue and wore a long sword at his waist. As he strode the short distance from the tent to the top of the mound, the sun caught the jewels in the hilt of his sword and it shone magnificently. There was determination in his stance, as he turned to face the sangat.

Then, slowly and deliberately, he drew his sword. All was still. He spoke:  “My Beloved Sikhs, is there one among you who will give your life for me?” Had we heard correctly? Was he really serious? Hearts quickened and faces paled all around, but there was not a sound. Again he asked, “Is there one of you who will give your head to your Guru?” The minds of all were racing, but again there was silence. And yet a third time he spoke and called out, “Who will give me his head as proof of his faith?”

The silent tension was almost deafening. And then, one man, Bhai Daya Ram,  rose from where he sat and with bowed head replied, “O True King, my head is yours.” 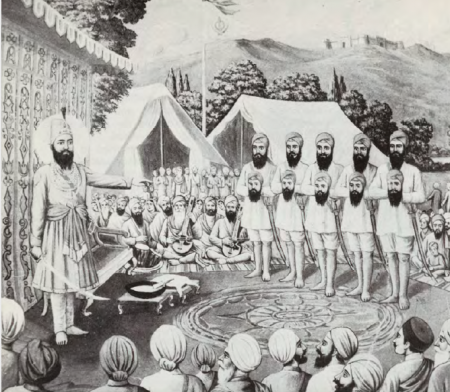 Immediately there was a sense of relief, and I grabbed for Kamala’s hand and found hers waiting for mine. But if that first feeling was relief, the next was awe for this man, who as he made his way toward the Guru, in his last living moments, held his head high, and a radiant peace came forth from him.

The Guru took him by the arm and led him into one of the tents. Again all was quiet and there was heard a thudding sound from within. Guru Gobind Rai emerged from the tent, and the crowd gasped at the sight of the sword dripping with blood.

He stood before us and asked, “Is there another true Sikh who will give me his head?” There was no response as now the crowd was certain he had taken Bhai Daya Ram’s life. A second time he asked, and a third and finally, a man called Dharam Das rose and replied, “O Great Guru, take my head.” He too, then, was led into the tent and Guru emerged again, sword wet with blood.

But this time he appeared angry and with sword raised high cried, “I want a head! Someone give me a head!” At this the crowd began to murmur and some called out that the Guru had lost his reason. Others began to leave, claiming he had gone mad.

But amidst the growing confusion, one man, Mahakam Chand, stood tall. His elegant dress made it obvious he was a man of great wealth and riches. He moved forward through the crowd, and when he reached the Guru he laid his jewels and necklaces at his feet, and then quietly walked into the tent.

When the Guru came forth again asking for yet another sacrifice, there was a general disturbance. Many were now leaving, thinking the Guru had so lost his senses he would kill them all. Others stayed, ashamed to run and ashamed because they could not make the final sacrifice.

This time, Sahib Chand, a young man, without thought for the years ahead of him, offered himself to the Guru. I will never forget that young man’s face. Such purity and such innocence were his.

The fifth time Guru Gobind Rai came forth asking for a life, most people were running away. Only a hundred or so remained. My friends, Kamala and Himmat, sat with bowed heads, and I — I was in a trance. After the shock of the first few who sacrificed, I asked myself again and again, who is this man for whom people give up their wealth, their homes, their very lives? What does he stand for?

And slowly, but ever more clearly, the Truth of it came to me. Then the cry of “Give me another head!” brought me back to reality. And then, Kamala was suddenly squeezing my hand, and I could feel hers shaking in mine. I watched, incredulous, as Himmat slowly rose, gently loosening his hand from hers, letting it rest for only a moment on her head, and then he said, “Take my life also, O True Guru,” and he walked forward to give his head.

Kamala’s face was streaming with silent tears, but a smile of infinite beauty and peace was on it, and I understood how their love for God and Guru was the same, and yet came before, their love for each other.

As I watched Himmat go, I was overcome by his grace and humility. Slowly, but more surely with every step, he approached the Guru, knelt at his feet and bowed low for the first time, to the Infinite God who had blessed him thus. He rose then, and his eyes met Guru Gobind Rai’s, and for the moments that they held each other’s gaze, that oneness and love for each other was obvious to all.

Then the Guru took him by the arm and led him to join the souls of the four who had gone before him … What happened next surely astonished everyone. The Guru brought forth the five men who had given their heads, all dressed in splendid robes and jewels. They stood with a majesty and royalty unmatched by any king, and with a humility born of Divine Grace. At the sight of the five pure beloved ones, Kamala gasped and immediately bowed to God and Guru in grateful supplication.

The five were then baptized by the Guru as Khalsa, and he in his supreme humility, begged them to baptize him in turn, saying that “Guru is Khalsa, and Khalsa is Guru.” And as they did so, I came to realize why I had wakened that day feeling new and special. For I, along with many Hindus and others, also received that day the baptism of the Pure Ones and like they, have given my head to God and Guru. “Wahe Guru Ji ka Khalsa. Wahe Guru Ji ki Fateh!”