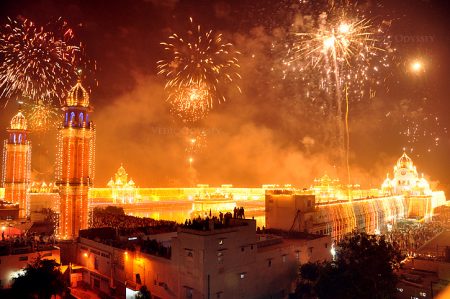 Diwali fireworks and lighting celebration at the Golden Temple (2012). Courtesy of Wikimedia Commons.

In India, endless battles were waged for power and territory. In a culture full of war and revenge, in a climate of fear and hostility, the peacemaker was persecuted.

The martyrdom of Guru Arjan Dev, a man of peace, marked a major turning point in Sikh history. When Guru Arjan Dev’s son, Hargobind, became the sixth Nanak, he trained his Sikhs to become warriors, so they could defend their rights and the rights of others to live and teach according to their faith.

The advent of the Sikh way of life and the establishment of the Mughal Empire took place at the same time in history. Sikhs were not against Islam. They opposed the feudal and imperial structure that encouraged injustice and exploitation. The scourges of caste divisions, religious discrimination and superstitions made daily life intolerable for ordinary people. The oppressors shielded themselves behind Islam, as well as Hinduism. Guru Hargobind used both the power of prayer and the sword to fight this oppression.

Guru Hargobind knew there must be a Sikh Army if Sikhs were to survive against their oppressors. He set up training in the military arts: fighting, fencing, hunting, archery, riding, and wrestling. With total devotion, and without pay, young Sikhs flocked to offer their allegiance to him. They were each given a sword and a horse.

He raised the Sikh flag and used large drums (nagaras) to get everyone’s attention when he made announcements. In 1606, he had the Akal Takhat built in front of Harimandir Sahib, the Golden Temple. Seated there, he listened to people’s problems and complaints, issued orders, and solved disputes.

Chandu and other enemies of the Guru learned of the Guru’s military preparations, and claimed that Guru Hargobind was not only converting Muslims to his faith, he was raising an army to avenge his father’s death. With this false rumor, they tried to convince Emperor Jahangir that Hargobind posed a major threat to his kingdom.

The Emperor decided to investigate for himself and invited Guru Hargobind to Delhi. There, the Guru was treated with utmost courtesy. Jahangir discussed religious matters with him and found that the Guru’s principles and beliefs posed no threat whatsoever to him or his kingdom.

The Fort at Gwalior

. . .  Chandu continued scheming to undermine the Emperor’s relationship with Guru Hargobind. He feared the Guru would try to avenge Guru Arjan Dev’s torture and death. At every opportunity, Chandu planted seeds of doubt and jealousy, pointing out the Guru’s increasing popularity and power. When Jahangir was ill, Chandu bribed an astrologer to influence the Emperor to send the Guru away on the pretext that in order for the Emperor to recover, a very holy man needed to go to the Fort at Gwalior and pray for his health. The Emperor’s ministers pointed out that Guru Hargobind was the obvious choice.

Although Guru Hargobind knew what was going on, he also understood that everything was part of God’s plan, so he set off for Gwalior. There he found the prisoners living in terrible conditions without adequate food or clothing. Among the prisoners were rajas whose kingdoms and thrones had been taken over by Jahangir. The Guru lived with them, shared his meager rations with them, and comforted them with stories of Guru Nanak and his teachings.

The rajas were so grateful, they prayed for him and his well being, wishing he could stay with them forever. They became Sikhs.

Meanwhile, Guru Hargobind’s mother sent Bhai Buddha to find out why her son had not returned home. Appalled by the conditions in the prison, Bhai Buddha suggested that Guru Hargobind escape. Instead, the Guru wrote to his mother and his Sikhs that he was content living in the Fort, where he could meditate without worldly distractions.

Nevertheless, the Sikhs wanted their leader back. They sent representatives to the Emperor asking him to free the Guru. Having had fearful dreams and visions, Jahangir ordered Guru Hargobind’s release.

However, the Guru refused to leave the prison until all the rajas were freed. The Emperor agreed to let them go, if the Guru vouched for their loyalty. It is said that the fifty-two rajas, upon hearing they were being released with him, seized the hem of Guru Hargobind’s robe and wouldn’t let go until he promised them salvation.

Sikhs celebrate the holiday Bandi Chhor Divas (which coincides with Diwali)  in remembrance of this event.