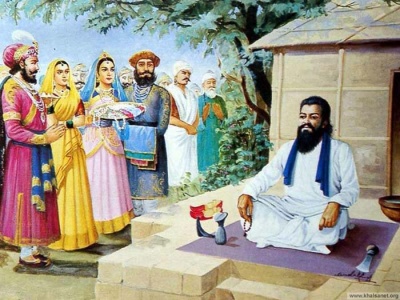 Bhagat Ravidas Ji (Gurmukhi: ਭਗਤ ਰਵਿਦਾਸ), was a poet, devotee, and a Gurmukh, born on Maghshudhi 14 Pooranmashi in Samat 1456 (January 30, 1399) in Kashi. He was originally a shoe maker from Uttar Pradesh.

He was a monotheist and was a knower of Gurmat. He admired Kabir Ji and Namdev Ji.

His parents were in the leather trade, and were very well off. He was barely five days old when Bhagat Ramanand visited his house and blessed the child. Ravidas was born to Raghu and Ghurbinia, who lived near the city of Varanasi.

When Ravidas reached the age of discretion his father inspired him to join the family business. But Ravidas was imbued with celestial and humane values. The money he received from his father for business, he spent in the welfare of the saints and needy. His father was extremely perturbed and banished him from the house.

By this time Ravidas was already married. Rather than resenting his father’s actions he quietly left the house, started living in a make-shift hut with his wife, and set up a small wayside shop for mending shoes. He did not abandon his love for God and built a temple of clay walls and thatched roof. His extreme devotion and universal love induced hundreds of people of all castes to join him in worship.

A rich man tried to allure him with the charm of wealth. It is said that he gave Ravidas a philosopher’s stone by the touch of which one could change any article into gold. In spite of Ravidas refusing the gift the rich man left the stone hung under the ceiling. When he came back after one year the stone was still hanging there. The rich man announced to the world the indisputable godliness of Bhagat Ravidas.

His poetry is brimming with ardent love for God, the Universe, nature, Guru, and the Name.

He was the first to motivate his followers to challenge discrimination on the grounds of caste and attack the Hindu caste system. By his deeds he proved that he was closer to God than those who were calling him ‘low caste.’

In the Siri Guru Granth Sahib, Guru Ram Das says that by remembering the Lord all the time, Bhagat Ravidas came to be recognized and respected by all the people despite his low caste. The Guru tells us how people of all the four castes came and bowed to Bhagat Ravidas. Ravidas was honored in the Court of the Lord.

Ravi Daas, the leather-worker, praised the Lord, and sang the Kirtan of His Praises each and every instant.

Although he was of low social status, he was exalted and elevated, and people of all four castes came and bowed at his feet.