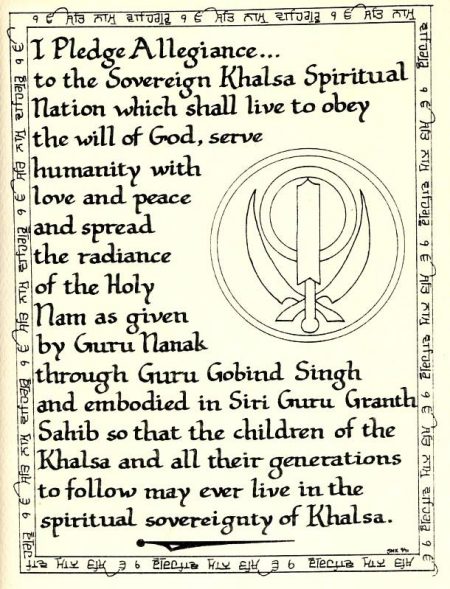 Excerpt from Chapter 1, Section A, “The Sikh Ministry”, pages 2-4,  of the book, Victory and Virtue

Sikh Dharma is conventionally described as a religion. More accurately, however, it is a way of life “Dharma” a practical, practicing reality. It sprouted from the seeds of the Word, spread by Guru Nanak upon the fertile soil of humanity’s spiritual discontent and yearning. As Guru, Nanak embodied the Shabad, the Word of God. He traveled across India and Asia, to Tibet and Ceylon and as far as Mecca. Everywhere he went, he sang and spoke of God, and the lifestyle, the Path, of the devotee of God. His followers began to live a lifestyle unique from that of either Hindu or Muslim; ceremonies were established for birth, death and marriage which were distinct from the prevailing society. His followers congregated into cities, especially Kartarpur, where Guru Nanak spent his later years, after he completed his extensive teaching tours. In these years, Guru Nanak himself was the embodiment of the Sikh Ministry. The manifestation of the message of Nanak was realized through the life’s work and example of Ten Guru’s, culminating in the life of Guru Gobind Singh as the embodiment of a saint/soldier. Thus, Guru Nanak passed his Light “the Guruship” on to Lehna, his most perfect disciple, who became Angad.

When Guru Angad carried the Divine Light, he established several centers of Sikh Worship; free kitchens were an integral part of these centers. As the expenses required to maintain them increased, it became necessary to organize the collection and disbursement of offerings, and masands were appointed for this purpose. Guru Angad also standardized the Gurmukhi script, and had copies of Guru Nanak’s poems and Banis distributed. He stressed physical fitness, and incorporating exercise classes and competitions into the daily routine, as well as establishing wrestling arenas at many of the centers.

Guru Amar Das made Langar an even more integral part of the community life. All visitors were required to first partake of the community meal (Langar), before they were given audience with him, a startling confrontation to the prevailing caste rules. He established twenty-two ‘manjees’, or preachers which included women as well as men. He expanded the collection of Shabads (Hymns), adding his own compositions to those of Guru Nanak and Guru Angad. He established customs for the developing Sikh community and was particularly bold in asserting the rights of women.

Guru Ram Das, the fourth Manifestation of Nanak, established the Holy City of Amritsar, which became a center of activity. He invited tradesmen and merchants (fifty-two professions in all), to set up shop side-by-side casting aside the strict rules of discrimination which defined the Hindu caste system. The faithful flocked to pay homage and worship there. Guru Ram Das sent out missionaries to all parts of the Panjab and beyond, spreading the Word. His Banis are drenched with the devotional love and adoration of the soul bride for her Husband Lord.

Under Guru Arjan, the Harimandir Sahib (the Golden Temple) was completed. Its construction required vast sums of money, and so a system of Das Vandh, of giving one-tenth of one’s income to the Guru, was established. Each month, the masands came to Amritsar with volunteers for the continuing seva projects, and the donations of the faithful. Guru Arjan toured the neighboring countryside, establishing centers of worship and cities, among them Tarn Taaran, Kartarpur and Sri Hargobindpur. Guru Arjan’s most glorious achievement was the compilation of the Adi Granth, the devotional poems of the first five Gurus, along with those of various Hindu and Muslim saints. This work, completed in 1604, served to unify and codify the teachings and the Shabads which Sikhs were given to recite and meditate upon.

After Guru Arjan Dev Ji was martyred in 1606, his son Guru Hargobind sat upon the Throne of Guru Nanak fully armed, prepared to defend the people’s innate right to worship God freely. He welcomed offerings of weapons and horses, and spent a great deal of time training with his soldiers. In his several battles with the Mughal Imperial forces, he was uniformly victorious. Great numbers of young men answered the call to arms and to righteousness, and Guru Hargobind expanded the system of masands and community centers. Later on this became the foundation of the Sikh nation.

Bhai Gurdas and Baba Buddha passed away during Guru Hargobind Sahib’s life. Both had been actively spreading the Guru’s Word for decades. Bhai Gurdas (who was cousin to Guru Ram Das’ wife Bibi Bhani), was the author of a great many poems which are chanted to this day in Gurdwaras everywhere. He was also the scribe of Guru Arjan as he dictated the Adi Granth itself.

Baba Buddha was just a boy when he met Guru Nanak in his retirement at Kartarpur. Because of the boy’s deep wisdom beyond his years, Guru Nanak changed his name from Bhai Bura to Baba Buddha (wise man). It was Baba Buddha who applied the tilak, the ceremonial mark of installation, to Gurus Angad, Amar Das, Ram Das, Arjan and Hargobind.

Guru Har Rai made several tours of the Punjab, and kept up a vigorous missionary program. His son, Guru Har Krishan, aged six, was a healer, and during an outbreak of smallpox in Delhi, he healed countless suffering souls, before sacrificing himself so that others might live. He is remembered in the Ardas: “Jis dithai sabh dukh jaa-i” Seeing him all sufferings shall depart. He saw the conflict within the Sikh community increase, as false claimants and corrupt masands intrigued with the Mughal government.

Guru Teg Bahadur unified the Sikh community with his ascension to the Throne of Guru Nanak. He made several long tours of the Punjab, and throughout India. He was a fervent missionary, whose presence alone spoke most eloquently for the Sikh community. When the Hindu community came to him for help from the Muslim persecution, he sacrificed his own life for the cause of religious freedom. His execution electrified the Punjab. His nine-year-old son Gobind Rai became the Tenth Guru and his call to arms was heard throughout India. After several stunning victories against the Hindu Hill Rajas and the Mughal Empire, the Tenth Guru created the Khalsa, on Baisakhi Day, 1699. Infusing his own essence into the Khalsa, he made the Khalsa the Guru, and then bowed down to the Khalsa. He thus became Guru Gobind Singh. He established the Rehit, the code of conduct, for a Sikh to follow. Guru Gobind Singh declared that the Guruship would no longer be passed to a human being, but to the Shabad Guru, embodied in the Siri Guru Granth Sahib. Upon his passing beyond, the Light of the Guru which had been incarnate for some two hundred years, was again diffused into the Word of God. His Sikhs were then directed to look only to the Siri Guru Granth Sahib as their Guru, for all time to come.

At the time of his death, Guru Gobind Singh chose Banda Bahadur to lead his army, to stand against the continuing tyranny and unrighteousness. Following the military defeat of Banda Bahadur and the disintegration of the Sikh army, the community of the Khalsa was scattered far and wide. Twice a year, at Baisakhi and Diwali, Sikhs gathered in Amritsar and decided matters of policy. These assemblies became known as “Sarbat Khalsa”. They appointed “jethadars” (group leaders), and issued ‘Gurmata’ (decrees). The Mughal Emperor began a policy to systematically eradicate the Sikh community. With their unmistakable Bana (uniform), long hair and full beards, Sikhs were obvious targets. They were forced to take to the mountains and the jungles to survive. It was said that the Sikhs lived in their saddles during these years.

During these times, the Gurdwaras were put under control of the Udasis, the followers of Guru Nanak’s son, Baba Siri Chand. In contrast to the full-haired, householder Khalsa, the Udasis were renunciates and clean-shaven. They were, however, accepted as part of the Sikh community by Guru Gobind Singh himself, and they maintained the Gurdwaras during the decades when the Khalsa was being hunted down. Finally, in 1733, after a full generation of this persecution, the new Emperor gave land grants and status to the leaders of the Sikh community. Jathas (groups) were formed, and the separate units were merged into the Dal Khalsa, the Army of the Khalsa. Following new Persian invasions, however, the Khalsa was again forced to the hills and jungles. Under Zakaraya Khan, a reward of fifty rupees was offered for any Sikh scalp brought in, and plunder of Sikh homes was made lawful. In the face of this persecution, however, the Sikhs maintained themselves as a distinct community and faith. Rather than beating down their spirit, these decades of unrelenting challenge and adversity hardened and strengthened the spirit of the Khalsa. They continued to resist the Mughal oppressors, and over the generations, they re-asserted their rights to their land and heritage. The Sikhs banded together into ‘missals’, and later, armies and virtual kingdoms took shape.

Under British rule, many Sikh families gave in to the pressures of society, and Sikh Dharma appeared to be on the wane. The Gurdwaras were placed under control of appointed officials, who in turn passed this on to their own offspring. With no safeguards or controls on their authority, a great deal of corruption and degradation crept into the administration of the Gurdwaras throughout the Punjab. Hindu idol worship was re-introduced to enhance revenues, and discrimination based on caste became common. The excesses and debaucheries committed by these priests eventually led to their undoing. In the second half of the nineteenth century, several revivalist movements sprang up, the most important being the Singh Sabha movement. Its first meeting was convened at Amritsar in 1873, and its ideals were as follows: to promote the Guru”s Word and Mission; to combat the insinuation of Hindu rituals and beliefs into the Sikh way of life; to publish and distribute books of Sikh Dharma; and to instill in Sikh youth an understanding and appreciation of Sikh Dharma.

In 1920, in Amritsar, the SGPC (Shiromani Gurdwara Parbhandhak Committee) was established, to bring the Gurdwaras back under the control of the Panth Khalsa. By their non-violent resistance movement, and their selfless sacrifice, over the years, more and more Gurdwaras came under their control. The SGPC continues to serve as the primary governing body of the Panth Khalsa.

In 1968, an historic event took place, which was to change the face of Sikh Dharma worldwide. One man, inspired and guided by God and Guru Ram Das, arrived in Canada, to spread the Guru”s Word in the West.  Over the next twenty-five years and more, Siri Singh Sahib Bhai Sahib Harbhajan Singh Khalsa Yogiji manifested the Radiance of the Guru’s Words, and thousands flocked to listen to his words. A New Age Renaissance took place in America, as young men and women throughout the Western hemisphere found themselves uplifted and transformed by the Word of Siri Guru Granth Sahib. The Siri Singh Sahib was ordained by the SGPC as the Chief Religious and Administrative Authority for Sikh Dharma in the Western Hemisphere. Sikh Dharma, was formed to organize and disseminate these teachings; hundreds of ministers of Sikh Dharma were ordained, and hundreds of teaching centers were established.

The Khalsa Council was established in 1974 to serve as the Administrative Body of Sikh Dharma in the Western Hemisphere. 3HO (Healthy, Happy, Holy Organization) Foundation was formed in 1969 to teach meditation, yoga and natural lifestyle to Sikhs and non-Sikhs alike.

In the new millenium, Sikh Dharma continues its worldwide mission to spread the Guru’s Word, and serve the spiritual needs of humankind.