Langar at the Golden Temple. Courtesy of Nicolas Mirguet via Flickr Creative Commons.

The 3rd Sikh guru, Guru Amar Das ji, proclaimed that no one would be allowed into his presence until that person had eaten in the Guru’s Kitchen, or Guru ka Langar. Of course, it was a wonderful service to make sure that everyone had this basic need for food taken care of before seeing the Guru. But Guru Amar Das had another goal in mind. When you eat in the Guru ka Langar everyone sits on the same level, on the floor or ground and everyone eats the same food. This practice ensures that each person coming to see the Guru would be reminded that they were neither above nor below anyone else.

Equality of all people is one of the primary principles of Sikh Dharma introduced by the 1st guru, Guru Nanak. From his first utterance after his moment of liberation, Guru Nanak taught that, as there is only One God, then we are all equal, regardless of how we worship. He was a visionary in the way he encouraged people to rise above any socially imposed limitation.

“(Guru Nanak) gave a very clear message in his first message when he said, ‘Ek Ong Kar.’ He gave the equality. We are all creatures of one Creator.”
Siri Singh Sahib, Yogi Bhajan, March 30, 1997, Los Angeles, CA

Guru Nanak was also a social revolutionary in the way that he addressed the rights of women. At that time women were treated like property, but Guru Nanak elaborated on his concept of equality by unequivocally declaring that women are equal to men. 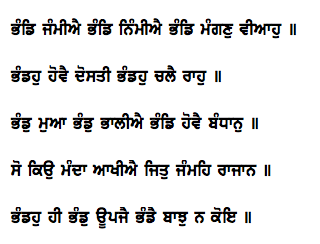 Bhand mu-aa bhand bhaalee-ai bhand hovai banDhaan.
When his woman dies, he seeks another woman; to woman he is bound.

Guru Amar Das extended the importance of treating women with equality even further by declaring that women should not veil their faces (Purdah) in public. He also banned female infanticide and the practice of voluntary or forced self-immolation of the widow on the funeral pyre of her husband (Sati), and encouraged widows to remarry. It was during the reign of Guru Amar Das that women were included in the “Manji and Piri” programs of spiritual stewardship, where Guru Amar Das chose 146 leaders, of which 52 were women, to carry the light of Sikh Dharma teachings to people far and wide.

When the 10th guru, Guru Gobind Singh formed the Khalsa (those who live in purity of consciousness), he made no distinction between men and women – expecting both to live with the same discipline. At that time many women even fought and died on the battlefield in equal roles of leadership with their male counterparts. It has been documented that women also proudly wore turbans, along with the other 5 K’s at that time. In current times many Sikh women have bent to social pressures to abandon their commitment to wearing a turban or wear them furtively, as small black wraps hidden under their colorful chunnis (scarfs). Only after young Sikh women of the West, upon the inspiration of the Siri Singh Sahib Yogi Bhajan, began proudly wearing larger white turbans have we seen a resurgence of the bold women’s turban being worn by women of Eastern origin. The full equal rights of women in Sikh Dharma continue to expand as we leave behind the archaic patriarchal social model of the Piscean Age and more Sikh women are empowered to demand equality.

Sikh Dharma began in India, which has a strongly Hindu-oriented social structure. From its ancient origins,  Hinduism has evolved with a rigid caste system. But Guru Nanak specifically instructed his Sikhs not to accept the caste system. Sikhs are encouraged not to use family names that are associated with particular caste groups and, instead, to use Singh (for men) and Kaur (for women). No one is thought to be of greater or lesser value because of the family into which they may have been born. There are no practices or rituals in Sikh Dharma that may only be performed by a person of any particular birth. All activities are open to all people.

Guru Ram Das, the 4th guru, designed the most sacred of Sikh temples, the Harimandir Sahib (Golden Temple) with four doors, each facing one of the four cardinal directions, to signify that the temple, and the path of Sikh Dharma, is open to people from all places and origins. Race and ethnicity are also not recognized as being of importance. In fact, there are no differences that limit or elevate anyone in Sikh Dharma. Guru Gobind Singh created the Khalsa as a way for all of us to have the opportunity to transform ourselves – to live in excellence and rise to our highest vision of our destiny, regardless of where we began this life. As we are all the same in the eyes of God, then in that Divine vision, we all have unlimited potential, we are all equal; we are all One.

“Equality; all those who feel are brothers. Simple formula. All those who breathe are brethren. If you can live on this you can all live in peace.”
Siri Singh Sahib,Yogi Bhajan, May 29, 1970, Los Angeles, CA