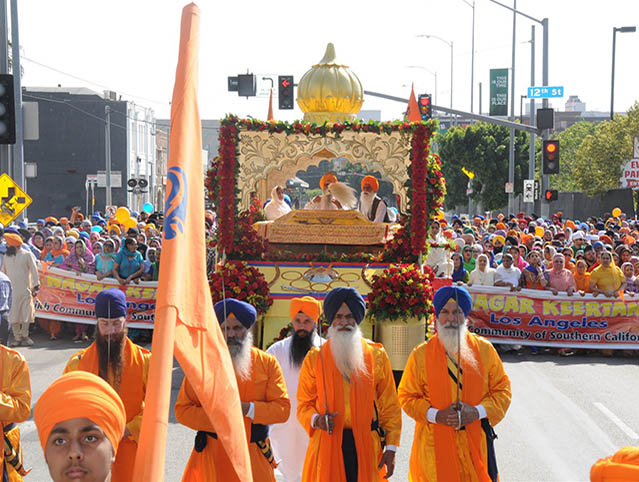 Celebrate the Birth of the Khalsa at Baisakhi Gurdwara through Seva, Kirtan, Langar, Bazaar and Nagar Kirtan.

Thousands of Sikhs gather at the Los Angeles Convention Center to attend the Anniversary of Baisakhi celebration coordinated by Sikh Dharma of Southern California and Guru Ram Das Ashram, with the cooperation of many other Gurdwaras in Los Angeles County.

Baisakhi commemorates the day in 1699 when Guru Gobind Singh, the 10th of the Sikh Gurus, bestowed and blessed Sikhs with the unique form, appearance and discipline associated with the Sikh way of life. Baisakhi also coincides with the first Spring Harvest and the Sikh New Year.

This all-day event starts at 4 a.m. at Guru Ram Das Ashram with Asa di Var (devotional morning songs). At 7 a.m., we meet to begin the Grand Motorcade Procession to escort the Siri Guru Granth Sahib to the Convention Center. The caravan of cars arrives there before 8 a.m. Gatka performers dance with flashing swords, conches sound and drums echo through the halls as the Siri Guru is carried overhead and set to preside in the beautifully decorated Gurdwara Hall.

The Kirtan (spiritual music) program includes performances from some of the most inspiring and well-known Ragi Kirtan jathas (musical groups) from around the world, jathas from many Southern California Sikh Gurdwaras, as well as various youth and children’s Kirtan groups.

During this program, attendees have an opportunity to listen to speeches from prominent interfaith and political leaders, including officials from all levels of government.

Participants can also enjoy Langar (vegetarian food is served all day in the langar hall), explore the Baisakhi Bazaar (where all kinds of wares are for sale, including clothing, books, CDs, gems and jewelry, posters, paintings, shawls and more), or drop their children off in the Children’s Activity Hall, where kids can play and enjoy stories, art projects and other activities (supervision and materials provided).

A colorful parade (Nagar Kirtan) through the heart of downtown Los Angeles concludes the day’s events. The Nagar Kirtan features floats from many gurdwaras. Special designs are created that highlight special Sikh themes, lifestyles and values.

Visit the Los Angeles Guru Ram Das Ashram webpage for up to date information and ways that you can serve.