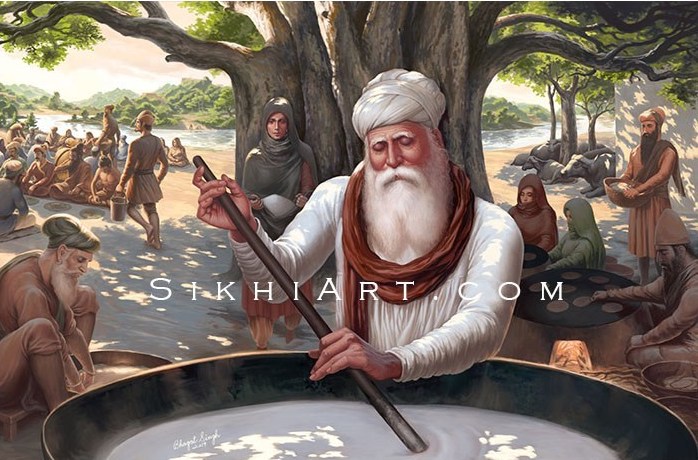 Guru Amar Das said that God rewards patience and the Guru helps those who have endurance. He advocated humility, compassion, and serving people of God. He maintained a free kitchen providing bountiful food, while he himself ate only two very simple meals a day.

Guru Amar Das insisted that before anyone could get an audience with him, they must first eat in the free kitchen. People of all castes, peasants and royalty, Hindus and Muslims, all sat together, side by side, in the same langar lines.

To carry Guru Nanak’s teachings far and wide, Guru Amar Das trained 146 teachers, including fifty-two women, thus adding practical emphasis to Guru Nanak’s respect and appreciation for women. These teachers traveled extensively to minister to the spiritual needs of the growing number of the Guru’s followers.

Furthering the concept of community, Guru Amar Das also established twenty-two centers (manjis) presided over by devout Sikhs. He taught that the pilgrimages, penances, and Hindu rituals that had been appropriate for the three previous Ages—Sat Yug, Dwarpar Yug, and Treta Yug—were no longer suitable nor effective in this Age, the Kaliyug. The only thing that can earn salvation is meditating on and repeating God’s Name.

Guru Amar Das had copies made of the prayers and poems of Guru Nanak and Guru Angad, and then added his own verses. All these divine words of wisdom were read at the many manjis he had established all over India.

He denounced purdah, the veiling of a woman’s face in public, and sati, the tradition that expected a widow to burn herself on her husband’s funeral pyre, a practice that Guru Nanak himself had condemned. Guru Amar Das also appealed to the Sikhs to live a family life, what he called ghrist-mai-udas: “renunciation in the midst of the world.” Or, we might translate it as, “Living in the world but not of it.”

An ancient analogy of such non-attachment to the world is the pure lotus flower that floats pristine and pure on the surface of the water, yet has its roots in the mud below.