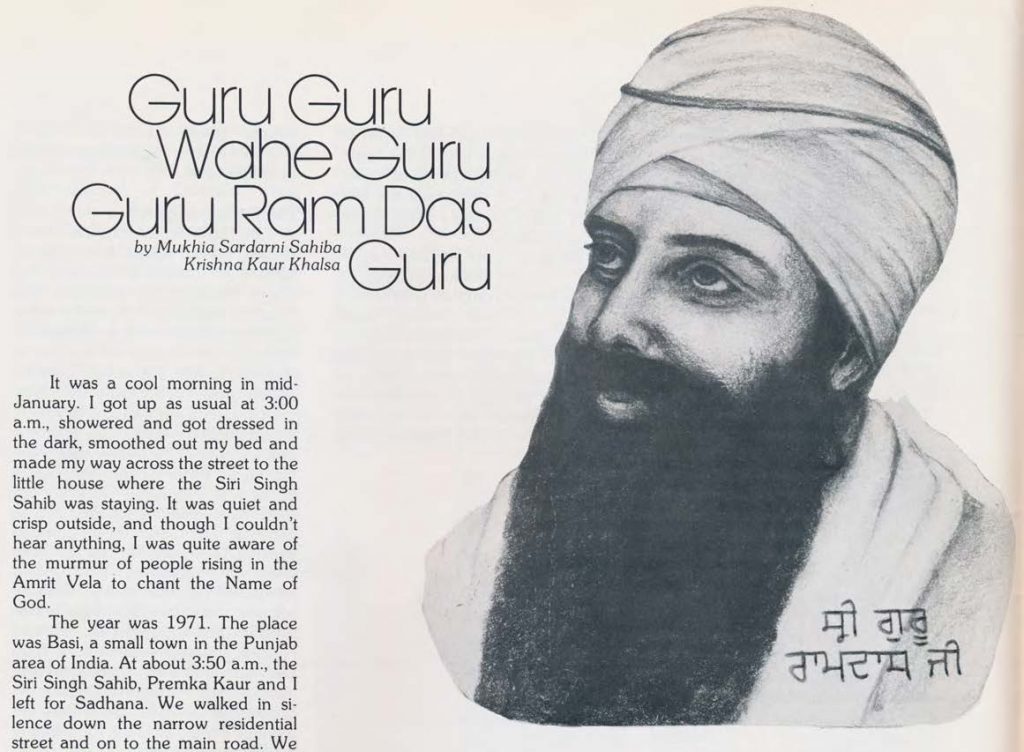 This is an article from a 1978 issue of Sikh Dharma Brotherhood, written by M.S.S. Krishna Kaur Khalsa, where she recounts her experience in 1971 of hearing the “Guru Guru Wahe Guru, Guru Ram Das Guru” mantra for the first time.

It was a cool morning in mid-January. I got up as usual at 3:00 a.m., showered and got dressed in the dark, smoothed out my bed and made my way across the street to the little house where the Siri Singh Sahib was staying. It was quiet and crisp outside, and though I couldn’t hear anything, I was quite aware of the murmur of people rising in the Amrit Vela to chant the Name of God.

The year was 1971. The place was Basi, a small town in the Punjab area of India. At about 3:50 a.m., the Siri Singh Sahib, Premka Kaur and I left for Sadhana. We walked in silence down the narrow residential street and on to the main road. We kept our blankets around our shoulders and strode very methodically to the Sadhana site. The only sounds were the wind dancing off the trees and my voice chanting Ek Ong Kar Sat Nam Siri Wha Guru.

We were 85 Sikhs of Western origin who had come to India for the first time to experience the land of our Gurus. What a blessing it was to touch the hearts of so many beautiful people who rejoiced at the thought of so many Americans embracing the Sikh faith.

When we first got to India we met a few people whose skepticism about our sincerity and the sincerity of the Siri Singh Sahib ended up being quite a test for all of us. They kept insisting that the Siri Singh Sahib bow to a particular Baba and proclaim him as his teacher. The Siri Singh Sahib refused, saying, “Guru Ram Das is my teacher.” This statement drew various reactions. Among them were scoffers who sneered, “Well, if he is your teacher, where is the mantra he gave you? A teacher has to give a student a mantra.”

These unbelievers had very little effect on the Siri Singh Sahib. He knew Guru Ram Das was his teacher, because it was at the feet of Guru Ram Das that he received “knowledge”.  It was while washing the floors of the Sacred Harimandir Sahib that he was blessed with the Eternal Light.

On this particular morning during the Siri Singh Sahib’s meditation, his teacher, Guru Ram Das, had given him a mantra. “Guru Guru Wahe Guru, Guru Ram Das Guru.” He carried that mantra in his heart to the Sadhana site with the spirit of a true son of the Guru and shared it with us all.

We sat on the floor of a dingy storage barn. A wood burning stove crackled in the center of the room, giving off the only light and the only warmth. The Siri Singh Sahib led us through a series of warm up exercises to loosen our circulation and free our limbs from the tension that we had become so accustomed to. When the exercises were finished, we pulled our blankets around us, huddled close together and listened as he taught us the words of the mantra his teacher had just given to him minutes before.

If I didn’t know anything before, I certainly knew then that we were not in India just to sight see and visit holy places. We were there to draw an arrow in the sand of time saying, “The sun shall rise in the West.”

“Guru Guru Wahe Guru. Guru Ram Das Guru“ began to stir deep within my heart. I didn’t understand everything I was feeling or experiencing with that mantra, but I found it very comforting. You could hear it all over the campus where we were staying, being sung consciously by some and unconsciously by others. The spirit of Guru Ram Das had been awakened in practically all of us.

I used to sit for hours with people that were sent to me by the Siri Singh Sahib to chant this mantra. I watched them change in front of me as they chanted. I watched the pain and discomfort dissolve from their faces. I felt their hearts open and their minds expand as their voices merged with the infinite sound current. I was in bliss. What better way to spend the day than singing the praises of Guru Ram Das.

That was seven or eight years ago. Yes, that was a beginning. Today our western musicians have composed at least one hundred melodies to accompany the mantra “Guru Guru Wahe Guru, Guru Ram Das Guru.” In addition, there have been about half that many songs written telling the story of Guru Ram Das and expounding on the many ways he has inspired the sangat. The protection and guidance we get from him has strengthened us individually and collectively, making it possible for us to endure the tests of the times.

And by chanting that divine mantra, revealed to us through the Siri Singh Sahib, many of our brothers and sisters have been miraculously healed.

The power of the teachings of our Gurus from Guru Nanak to Guru Gobind Singh is rapidly manifesting itself in the West. It is most clearly seen in the children of the Khalsa. These pure channels for the Guru’s Bani have been raised on “Nam”, quite unlike most of us adults. They reflect the purity and grace of the Guru and serve as a constant reminder to us that this great and glorious path is not an easy one to tread.

God bless the Siri Singh Sahib, Bhai Sahib Harbhajan Singh Khalsa Yogiji who shared with us the love he has for his teacher and taught us the glory of chanting the Name of God. May he be remembered throughout the times as a true son of the Khalsa.

Read how to practice this mantra and listen to melodies 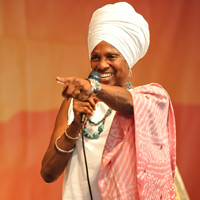 Krishna Kaur, a dynamic, heart centered Yoga teacher, began studying with Yogi Bhajan in 1970 and has passionately taught the art and science of Kundalini Yoga and Self Awareness for over 40 years. She brings a wealth of knowledge and experience from her teaching in Africa, Mexico, and inner cities throughout the United States. A master teacher trainer of Kundalini Yoga as taught by Yogi Bhajan, she conducts workshops in Canada, Europe, Asia and Latin America.

She is certified by the 3HO Foundation and the Kundalini Research Institute as a Kundalini Yoga Teacher and Trainer of both Level I and II. She is the regional coordinator for 3HO Africa, which unites Kundalini Yoga in Africa. Krishna also founded and runs Y.O.G.A. for Youth, a non-profit dedicated to training yoga teachers to work with at-risk youth and creating yoga programs in schools and juvenile facilities.

Under the business name of 10th Gate Yoga, Kaur opened the first yoga center in South Central Los Angeles and continues to train yoga teachers, teach workshops, and bring yoga to the underserved populations throughout the world. She currently lives in Los Angeles, California and teaches on Monday evenings at her 10th Gate Yoga home studio.

Krishna Kaur is a passionate & knowledgeable speaker on a variety of topics ranging from health, spirituality and women’s issues to historic South Central Los Angeles and working with urban youth. Contact info@krishnakaur.org for details on hiring Krishna to speak at your conference or special event.