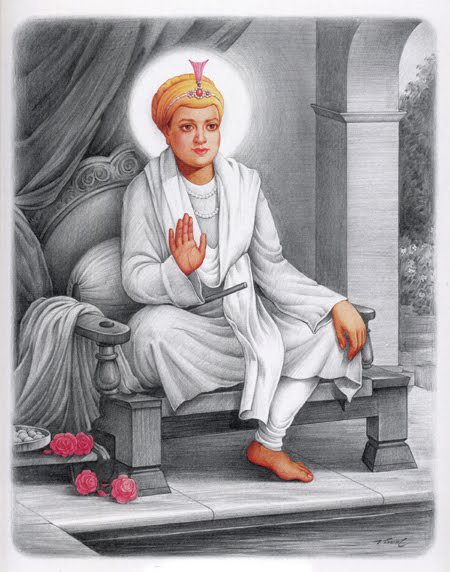 Remember and meditate upon respected Guru Har Krishan, by having the sight of whom, all pains vanish – Ardas Sahib

The information below was originally published by SikhiWiki. It has been adapted from its original format.

In human history, there are but few devotees of God who have achieved a supreme level of spirituality in such a tender age, as Guru Har Krishan  did . . .

During the year 1663, when Guru Har Krishan was in Delhi, a severe epidemic of cholera and smallpox broke out. The seven-year-old Guru attended to and served the suffering people with complete devotion.

By his grace, the lake at Bangla Sahib provided a cure for thousands of people. In the process of serving the diseased, the Guru was himself seized by high fever and an attack of smallpox, eventually passing away on March 30 1664, aged just eight years.

The Guru wished that nobody mourn his death, rather instructing the Sikhs to sing hymns from the Gurbani. The Tenth Guru, Guru Gobind Singh, later paid tribute to Guru Har Krishan by stating “Let us think of the holy Har Krishan, whose sight dispels all sorrow,” which forms a part of the daily Sikh prayer Ardas.