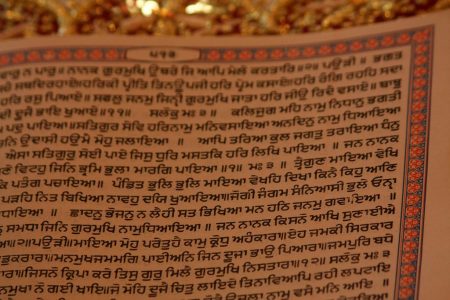 Part 2 of Chapter 3 of Victory and Virtue

Within it’s 1430 pages, the Shabads of the Siri Guru Granth Sahib are arranged in thirty-one Ragas, the traditional Indian musical measures and scales. Within the Ragas, they are arranged by order of the Sikh Gurus, with the Shabads of the Hindu and Muslim Saints following. The Shabads are written in various meters and rhythms, and are organized accordingly. For instance, Ashtapadi – eight steps, or Panch-padi – five steps.
The Siri Guru Granth Sahib is written in Gurmukhi script, but the Shabads were written in many different languages including Panjabi, Sanskrit and Persian.

KARTARPUR VAALI BIR: As described above, Guru Arjun dictated the Adi Granth to Bhai Gur Das. This first volume, or Bir, was made in Amritsar and later transferred to Kartarpur, where it remains today. The opening lines are in the hand of Guru Arjun, and it bears the signature of Guru Hargobind at the end. There are several blank pages, left by Guru Arjun to hold the writings of Guru Teg Bahadur.

BHAI BANNO VAALI BIR: After completing the Adi Granth, Guru Arjun asked one of his Sikhs, Bhai Banno, to take the manuscript to Lahore to have it bound. During this journey, Bhai Banno had a copy made for his own use. He inserted a few Shabads of his own choosing, however. This version remains with his descendents.

DAMDAMA VAALI BIR: This is the volume dictated by Guru Gobind Singh at Damdama Sahib to Mani Singh. In it, Guru Gobind Singh included the Shabads of Guru Teg Bahadur. The volumes of the Siri Guru Granth Sahib which preside over our Gurdwaras now are copies of this edition.

Using the Gurmukhi Bir and the English Translation

In the West, it has become common to use the English translation of the Siri Guru Granth Sahib in Gurdwara programs and Akhand Paaths, because many of the Western Sikhs are not fluent in Gurmukhi. This has served to bring many to the Feet of the Guru who otherwise may not have had the opportunity to experience the Shabad Guru. It should be noted, however, that it is ideal to install the full Gurmukhi Bir in the Gurdwara in order to fully experience and develop a relationship with the Guru. The English translation can be installed on a separate Palki on the side and serve to illuminate the sangat in the meaning of the Words of the Guru. The English translation may be used during an Akhand Paath in which the participants are not fluent in Gurmukhi. Howev er, if a special Gurdwara program is being planned, the English Akhand Paath days can be accomodated so that the full Gurmukhi Bir of Siri Guru Granth Sahib presides.

A Sikh is encouraged to learn to read Gurmukhi so as to deepen his or her experience of Gurbani and so that the full body of the Guru may be installed in the Gurdwara.

If one wishes to secure a Gurmukhi Bir of the Siri Guru Granth Sahib, s/he may contact the Office of the Bhai Sahiba of Sikh Dharma.

Visit the SDI Marketplace to purchase Victory and Virtue:  Ceremonies and Code of Conduct of Sikh Dharma