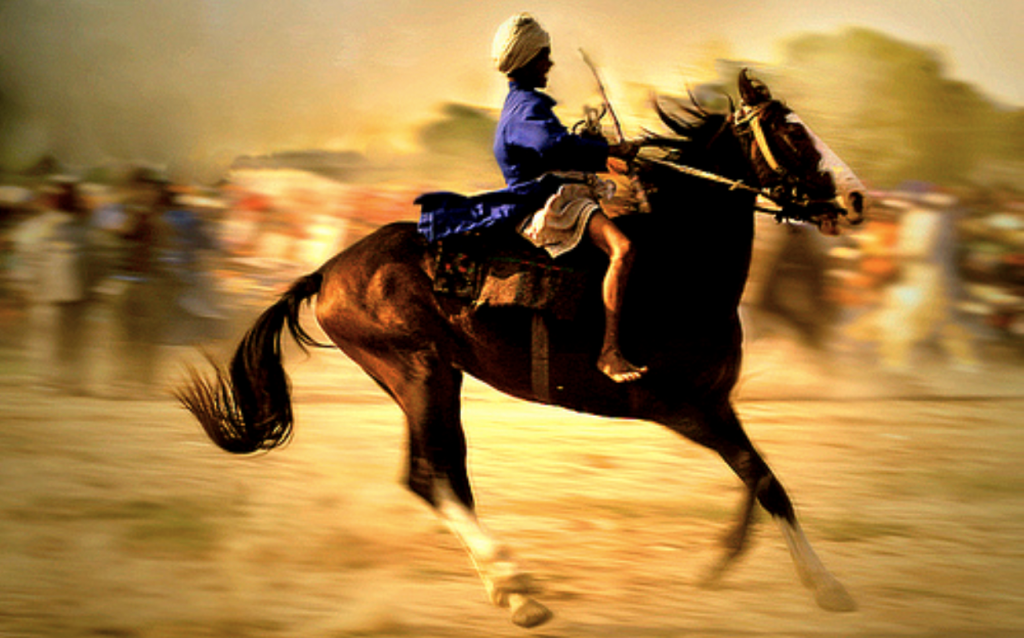 This post has been excerpted and updated from an article originally published by SikhNet. It was written by Neena Chaudhry.

With shining swords, long spears, conical turbans and twirled-up mustaches, Nihangs gallop past on frothing horses, raising clouds of dust, as they celebrate Hola Mohalla every March in Punjab.

Coinciding with Holi, the festival of color, it reminds the people about the tradition of meaningful festivity, and displays the valor inculcated in the Sikh community by Guru Gobind Singh, who took to armed struggle against tyranny.

The foothills of the Shivaliks in Ropar district of Punjab’s northeastern region, especially around the historic townships of Anandpur Sahib and Kiratpur Sahib, have, since 1701, been playing host to Hola Mohalla. The Indian government has accorded it the status of a national festival.

Guru Gobind Singh rechristened the Holi festival by the end of the 17th century as Hola Mohalla, to use the opportunity to train his forces in the art of warfare. Near the fort of Holgarh in Anandpur Sahib, his headquarters, the Nihangs, as the Sikh warriors were called, divided into two groups and engaged in mock battle.

The military exercise, which was personally supervised by the Guru, was carried out on the bed of the River Charan Ganga with the famous Hindu temple of Mata Naina Devi in the Shivaliks as the backdrop.

Faced with the might of the Mughal empire, the Guru felt the need to create a typical martial vocabulary, differentiating it from the local dialect, to ensure the permanence of Chardikala (high spirits) among his men . . .

A mohalla (procession) to symbolize liberty, freedom, bravery and wisdom was made part of the celebration . . . The tradition of spraying color continued, even as Guru Gobind Singh began using this activity to train his men in the tactics of war.

Once known as the Guru di ladli fauj (the Guru’s beloved army) the Nihangs are the main attraction of the present-day Hola Mohalla celebration.

The Nihangs attempt to preserve their heritage and tradition by strict observance of Rehat Maryada (the religious code of social conduct). They still live in camps called chhaawni (cantonment), eat in iron utensils (batta) and move in formations.

Hola Mohalla is an occasion for them to display their preparedness for war and exhibit their skills in martial arts. But one is not surprised to see a Nihang zip past on a motorcycle or a scooter. Jeeps, trucks and improvised vehicles called ‘Marut’ are also popular means of transport . . .

People, including women, are seen in large numbers around the place where the Nihangs prepare phenomenal quantities of a concoction of cannabis, milk, almonds, sugar, and other nuts, to be served as prashad throughout the day.

By noon, the Nihangs perform the bhog ceremony of recitation of the Siri Guru Granth Sahib . . .

Dressed in new saffron or deep blue robes, the Nihangs move from their chhaawnis led by horsemen beating nagaras (drums). Armed with their traditional weapons, the Nihangs pay obeisance at the historic Gurdwara Takht Keshgarh Sahib, and then proceed towards Gurdwara Guru-ki-Lahore, from where they eagerly rush to the beds of the Charan Ganga river to perform feats of daring.

Though the festival itself is a three-day affair, the movement of devotees carries on for a full week, and hundreds of families come in trucks from as far as Calcutta and Patna in the East, Gwalior in Madhya Pradesh, and Nanded in Maharashtra.

For the convenience of these pilgrims, the local villagers set up langars (voluntary community kitchens) on all roads leading to Anandpur Sahib. Proper Punjabi food is served with utmost humility as pilgrims from all castes and walks of life sit together on the ground and eat. Some villagers organize resting places for the pilgrims. 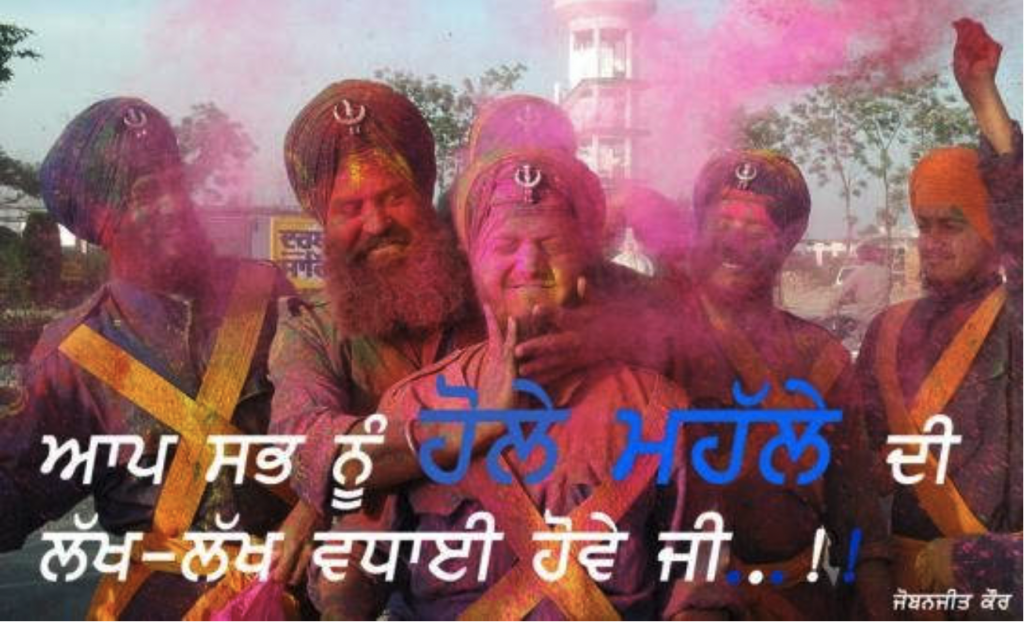 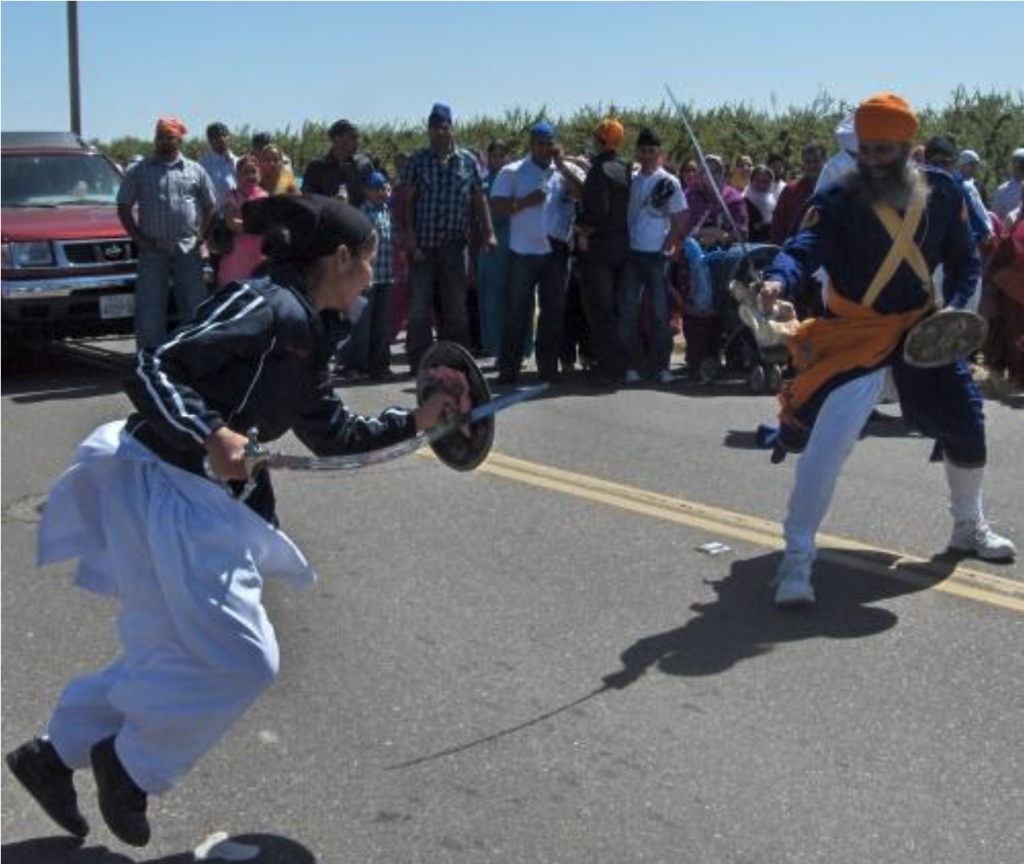