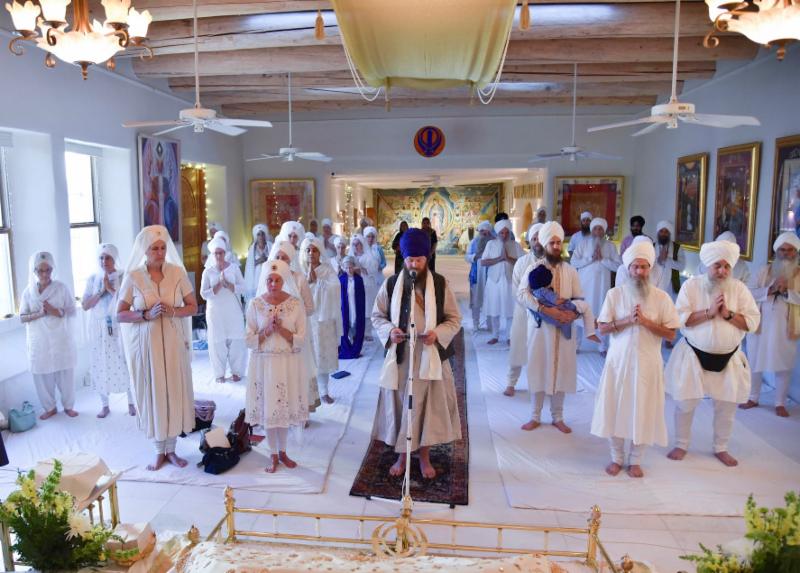 Some of the below information is excerpted from the book Victory & Virtue: Ceremonies & Code of Conduct of Sikh Dharma (2nd Edition)

The word “Ardas” literally means “prayer.” But the traditional Sikh Ardas has come to represent a specific form of prayer recited in every Gurdwara program.

It is recited before the Guru is transported or brought into parkaash, just before the Hukam is taken, and again when the Guru is set into sukhaasan.

It can also be recited before undertaking any activity of significance, before leaving on a journey, to give thanks, or as a way of daily remembering the Creator.

The core of Ardas is an invocation which Guru Gobind Singh recited at the beginning of his epic poem Chandi di Vaar. In it, ,he calls upon the power of Adi Shakti in the form of Pritham Bhagauti.

He then calls upon the Spirit of the Guru, elaborating upon the nine manifestations from Guru Nanak through Guru Teg Bahadur. This part of Ardas is unchangeable and should be recited in the original Gurmukhi, if possible.

The remainder of Ardas honors the memory of Guru Gobind Singh, his four sons, and those Sikhs who have sacrificed and kept up in the face of adversity. Since this part of Ardas was not composed by the Gurus, it is most appropriate for this to be recited in the language of the people attending Gurdwara.

Many ministers recite this from memory, but many others prefer to read it. In either case, it should bring the Sangat back to this crucial remembrance of sacrifice and surrender; it should not become an empty ritual. Remember that you are not merely reading Ardas; you are leading the Sangat, channeling the group energy towards creative manifestation and merger.

Toward the end of Ardas, a blessing is asked for the Guruparshad, and the Lungar. Personal remembrances may be added at this time for birthdays, deaths, anniversaries, and sacrifices, and prayers for health and recovery from illness or adversity. It is also a tradition to ask for a blessing from one’s Spiritual Teacher. Many ask for blessings upon the Siri Singh Sahib, whose sacrifice and inspiration led so many thousands to the Feet of the Guru.

The closing line: Nanak Naam, Chardee Kala, Tere Bhaane Sarbat Daa Bhalaa (Through Nanak, May Thy Name Forever Increase and the Spirit be Exalted and May All People Prosper By Thy Grace!) ends the Ardas.

Any words may be used to invoke blessings from the Guru but should not be used as an opportunity to preach or lecture to the Sangat. The Ardas should be in a flowing rhythm. The person offering the Ardas removes his or her socks and has washed his or her hands.

Jaikara means “call of victory.” The most common Jaikara is “Bole So Nihaal,” (the one who speaks shall be blessed), which is answered by “Sat Siri Akal” (The Great Truth is Undying!).

This call is made by the person reciting Ardas at its close, and the Sadh Sangat returns the call in a spirited prayer to the Creator that the Truth may prevail through His servants.

The cry of Bole So Nihal may be sent up several times in a row. If it is offered up more than once, then it is usually given five times (representing one for each of the Panj Piaray). 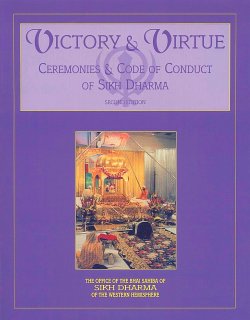 This comprehensive manual has a wealth of information for anyone who wishes to deepen his or her understanding and appreciation of the practices of the Sikh lifestyle. Important historical background, Gurdwara protocols and ceremonies, and the science of the sound current are just some of the areas included.

Victory and Virtue is Available to Purchase through the SDI Marketplace