We often hear people say, “Oh, I felt his presence….” What does that actually MEAN, anyway? Yet we have all experienced it with individuals whom we love, respect, look to: the  saints, sages, heros and warriors, beyond Time and Space, we feel their presence. Well, in Hazur Sahib you FEEL Guru Gobind Singh; you are truly in the Masters Presence. Hazur Sahib actually literally means that: the Masters Presence. When we say we FEEL them, we are experiencing their Subtle Body, and I have come to believe that we are perceiving within our own selves, vibrating with the Realm of consciousness which that individual mastered. It somehow becomes more available to us beyond Time and Space. I believe that, and have experienced that, especially in India at the sacred places.

The actual Gurdwara of Hazur Sahib has been built upon the exact place Guru Gobind Singh left his body. Even though he specifically ordered not to build any kind of shrine to him or their lineage would end. (He was serious about his worship of the ONE! And not to have himself worshipped!) So, in true outrageous form, a group of Nihungs (original warriors) who were unmarried and celibate anyway thought they would sacrifice, take the chance, as an act of devotion. It was worth it! They built a simple building around the spot, revering his weapons. In the next century, Maharaja Ranjit Singh rebuilt it in elegant style. So, this beautiful Gurdwara exists in Guru Gobind Singh’s name. And his weapons are there in the inner sanctuary, where no one is actually allowed to go except for one Jethadar (called the pujari) whose role it is to guard and care for these weapons and that central inner Sanctuary. 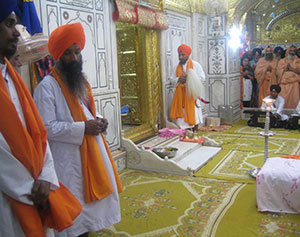 My first experience upon beholding the Gurdwara and spending the first morning there was the experience of Guru Gobind Singh and his weapons. Awesome, powerful, grounding, very serious weapons…. it is okay…. Powerful, I was getting my bearings in the space. You know how that is in a new powerful space. It takes a while to let it all in, to expand to the reality of the space. Then, after spending some time, it starts to sink in…. and wow!

Now I understand why Hazur Sahib is one of the Takhats, and why every Sikh must behold this place once in their lifetime! It is not just glory to Guru Gobind Singh. It is what he DID there before he died that gives you the incredible Radiant Body Cleanse! In his great Mastery, all that he was, in all the glory of who he was, he bowed to the Shabad Guru, he completely surrendered in Trust and Humility, offering all that he was, and acknowledged the Siri Guru Granth, the Shabad Guru as the Guru for all through Time. Experiencing Hazur Sahib, one absorbs that amazing act of the Master; how to be in one’s absolute Glory, Radiance, Grace of life, and at the same time, completely surrendered. Oh, my. Radiant Body activates, voltage of energy like a huge Sun, crystal clear identity. It is a powerful experience. Like the Sun just activated your Radiant Body. And it is consistent. And then there is a sweetness that descends upon you. An ease….. a grace…… In the Masters Presence…. Serving his altar….. his Eternal Bow…. Can you feel it? You bow….. you receive… you are One…. YOU are part of the Eternal Bowing!

So here we had come to honor that moment 300 years ago when Guru Gobind Singh surrendered completely to the Shabad Guru. That moment which has activated and uplifted the consciousness of humanity and made available a great state of chardi kala, uplifted spirit, risen Kundalini! And this Takhat, this Gurdwara is a container for that brilliant realm.

A Takhat is a “Throne” a “Seat” of power. There are 5 Takhats. Having experienced 3 of the Takhats, I get a sense of their significance. They contain and sustain and “anchor” the energy of the realms they represent. Akal Takhat opposite the Golden Temple in Amritsar, established by Guru Hargobind, guarding the grace of the Golden Temple. Keshgarh Sahib in Anandpur Sahib, where the Khalsa was born. And now Hazur Sahib, where the worship of Word became realized. 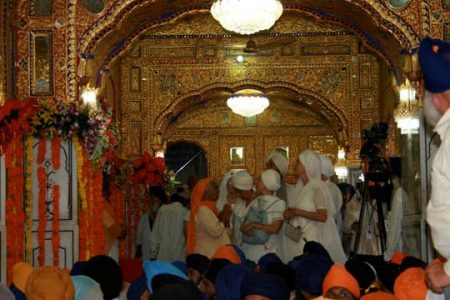 There were 50 or so of us on the Yatra, from all over the world, from the Khalsa Council, from Miri Piri Academy, shining bright, white clothes flowing…. Shining brows…. We were there with millions of people, and probably every Nihung in India! I have to tell you the funniest story. Imagine security in this place as millions of people are crowding into the great marbelled courtyard around the Gurudwara. Everyone passes through a small archway. And everybody has swords, at least their kirpan, but mostly lots more swords, and some guns (rifles, not oozies), too! These Sikhs in this area are the warriors. And the Nihungs, who have maintained the warrior tradition from Guru Gobind Singh’s time, are serious about their weapons. Yet, I must say, one feels extremely safe around these guys. These are not the Taliban. They are Guru Nanak’s Sikhs, too. I like warriors like these around me. So, there is a security machine, like at the airport! Can you imagine! And we are all going through—I had my kirpan on, too—and we are all beeping away! Nihungs with guns, swords, etc.! It was hilarious. I figured out that the security machine must be to capture those who DON’T have their kirpan on! Ha, ha! India…… So outrageous…. You can only laugh, relax, and enjoy!

The gift from Sikh Dharma International was given to the Takhat. It is the most amazing piece of art-crafted jewelry I have ever seen. The Kalgi is the “turban pin” that you see adorning Guru Gobind Singh’s turban in paintings of him. This one was created by donations from members of the Khalsa Council and Sikhs all over the world. It was very costly and beautiful, with many blue topaz and diamonds and an intricate beautifully crafted design … Like the radiance of the Arcline manifested in 3D. It was received without a lot of fanfare. A humble gift from the Khalsa to the glory of Guru Gobind Singh and his act of surrender, and will sit forever in this glorious place, In the Masters Presence.

A very moving element of this Yatra was the delivering of a copy of the Spanish translation of Siri Guru Granth Sahib to each of the Takhats. Guru Amrit Kaur from Mexiso, wife of Babaji led the delegation. Babaji spent his adult life doing this translation. He died of cancer a number of years ago. He had many relapses during his life, vowing to finish the translation before he died. He breathed his last breath as the first completed copy came off the printing press. Literally. At this auspicious time of celebrating the Guru Gaddi of Siri Guru Granth Sahib, one copy of each was ceremoniously given to the Jethadar (Head) of each of the Takhats. It was very moving as we saw these leaders, too, shifting into the new Age, receiving this, and recognizing that this was not just a “translation” for study. This was THE GURU for millions of Spanish-speaking Sikhs. It would be held in the Takhat that they steward, awaiting the other translations in the many languages that represent the Sikhs all over the world.

It is difficult to describe the subtle power of this place. We visited a number of the significant Gurdwaras of the area. But this one took my breath away. Mata Sahib Ji was Guru Gobind Singh’s wife and Mother of the Khalsa. Their marriage was  not consummated physically. None of us should even try to guess at what was the sublime incarnation contract between herself and the Guru. She served him and became the Mother of the Khalsa. She spent her life serving him, delighting in feeding people in the langar, and in deep meditation on the mantra:  Wahe Guru. I melted into her space, and slipped away several times during the yatra to drive to this place, to offer deep prayers…. to just sit in her depth… to shed some tears….. held by the Mother. This amazing place! Huge lungar, feeding people, quiety balancing out all of the warrior energy of the area with her feminine depth and grace. And the Nihungs guard it! It is run and guarded by a whole community of Nihungs! Guarding the Grace of the Mother.

One significant evening, our yatra was honored by being given special seats in the main Darbar of the Takhat to experience the evening ceremonies. This evening, the great honor was given to our own Chardi Kala Jatha to perform Gurbani Kirtan. They brought great honor to all. They were so great.  They played for 2 hours! Then a powerful Rehiras and Arti were performed. The power of the Takhat activated the Radiant Body! It was pure bliss. 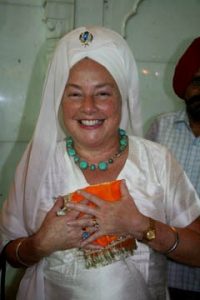 I had edged my way up to the very front railing when they started to present the weapons. Indescribable electricity! They bring out some of the weapons of Guru Gobind Singh individually. There they are! Right in front of your face! (If you happen to have pushed your way up to the front!) I was in awe and it took all my will power not to reach out and touch the ancient powerful swords. At one point, they had removed the ramalas (fabric covering the Guru) from the sanctuary and they were an arms length away from me. Like an innocent child, I found myself reaching out just to touch it. The young stately sevadar shook his head, “No….. but wait.” I know enough Punjabi to know he said, “Wait.” So I waited. The ceremony completed, and to my amazement, one of the young sevadars came over and gave me a shining new rupee. What?? I was puzzled. Being given a rupee in a Gurdwara? What? I received it, as if from Guru Gobind Singh himself. Then, the other sevadar came over and poured a huge handful of pink flower petals in my open hands! They are really into flower-throwing at this Gurdwara. But to receive the flowers which had just been on the Guru into my hands….. Hmmmm…… A rupee, these flower petals…. And as he put them into my hands he said again, “Wait….” Okay, I’m hangin’ around here. A few moments later he handed me one of the small ramalas from the Gurus care. What!! I was transported to another Realm. I put the significance together: in my personal prayer, no matter whom I am praying for: the community, my family, myself, ANYone. I always use the silent words: bring prosperity, grace, and honor. Those are my prayers. Here they were manifested in 3D, in a not-so-subtle metaphor: The rupee: Prosperity. The beautiful flower petals: Grace. The sacred ramala which covers the Guru: Honor. Oh my. This was like a direct interaction with Guru Gobind Singh himself. (I call it my Sai Baba moment.) I was beyond humbled. I felt like an innocent child receiving my hearts’ desire. In the Masters Presence…..

I pray that all who wish make their way to Hazur Sahib someday. We will make it happen in one of our Ladies Yatras in the years to come….. and sit in the Masters Presence.