The first time I had contact with Japji Sahib was when my girlfriend invited me to  sadhana in the yoga studio where she was doing her training and where I sometimes attended classes. She explained to me that the first thing you do is to recite this sacred scripture. At first I did not understand anything.  I did not even know how to pronounce correctly, but I felt a completely different energy on a group level.  I felt each one of us in a calm state. My girlfriend had a booklet with Japji Sahib translated into Spanish, so I had the opportunity to read it and understand what it was.  I started attending sadhana to have that group meditation space with the sound of Japji Sahib.

With the passing of the years, I came to know that beyond understanding what it says, it is about feeling the vibration and how its sound current envelops your whole being. Without leaving behind the meaning and sense of truth that I found in this beautiful composition, the sound current of Japji Sahib managed to open my heart to this understanding.

Previously, I had gone through what I call, a “spiritual tour”, looking for spiritual paths and nourishing myself with different traditions, but something was missing.  Something did not “light up” at all. I had confronted myself, knowing that some aspects were not right. I had gone through situations without the tools to understand them and that was leading me to a state of depression, anxiety, crisis and poor handling of emotional states, which had been dormant for years.  For a long time I experimented with different things, looking for my own Self, my identity and trying to understand my purpose.  I was looking for truth that resonated with me in my life, but because I was distracted and I could not feel it clearly.

On one occasion, during sadhana, we listened to the musical rendition of Japji Sahib by Chardi Kala Jatha and I felt a sense of ecstasy; of deep understanding of the sound of the words, the instruments, the voice.  Listening to that musical rendition of Japji Sahib and “realizing it”, took me to a different state. I felt a deep state of joy. At that time, I was studying Music Therapy, with the purpose of incorporating it into my work as a Speech Therapist. I had also attended Mantra Yoga lessons and devotional singing classes, because I have used music as a form of expression since I was a child.

After wandering and feeling lost, I had found a state of joy, of ecstasy. I was touched. I felt that now I was swimming in an infinite ocean and that I not only floated in it, but I merged with it. Immediately, I searched for information about the life of Guru Nanak.  His image projected something that made me feel comfortable. He transmitted to me a feeling of peace.  He touched my heart.   His work, his revolution– how he confronted everything in a loving way.  This brought me to want to establish a constant practice of listening and reciting Japji Sahib.

My day started with Japji Sahib. I think there was a time when I listened to it many times a day, because for me it was a way to feel at home; to feel in total calm and in a state where my heart was calm and in ecstasy.  Later I understood that my illness was as described by Guru Nanak– a sense of separation, and my doctor was the Guru. The sound current present in Japji Sahib had taken me to my doctor, the Guru; showed me the true path to healing; showed me who I was and where I live– where the Guru lives. These sensations and experiences led me to meet the Siri Guru Granth Sahib.  Before the first meeting, I had already surrendered. I was already at home. There was no doubt what the next steps were.

Now I am on a path of deepening my experience of Japji Sahib. I have attended classes with great teachers and feel each expression and each sound and thus am able to take a step beyond everything that surrounds Japji Sahib. It is a path without an end point, because there are so many answers.  Throughout my life I had many unresolved questions and I have felt that Japji  gives me a key to those answers.

I would like to transmit the great light that it brings to humanity– the depth at the beginning, Ek Ong Kaar, “We Are All One”. Feeling that truth in my heart, it took me to an absolutely different plane. I do not want to talk about transformation, but about recognition, to solve questions with the heart; to eliminate that which distracts you and separates you from who you are– your origin and destiny.

It is my Ardaas that the light of this vibrational sound current reaches all corners of this world. 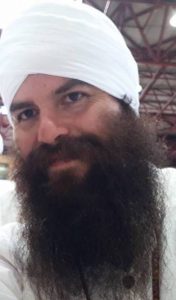 Speech Therapist with special focus on Neuro Rehabilitation. He has a Diploma in intervention in disability and rehabilitation through the use of technologies.