“Three hundred and some years ago, the finite being known as Guru Gobind Singh, the father of the Khalsa, could see the unseen times to come. He understood completely in the very depth of his being that times were going to come when humanity would have unlimited technology of the machine but would be very limited in their technology of the mind. And it is that barrier of technology of mind which we are unable to cross, which is causing us nothing but neurosis and insanity.

It is towards the one reality, that humans can live as humans, humans can enrich themselves as humans, humans can behold themselves as humans, and humans can behold themselves in the form, shape and in the energy and extension of their ecstasy unto God, that Guru Gobind Singh established the order of the Khalsa. It was for that thought, that this direct descendant and son of God so promised and so ordered and so told and so practiced. He said not a word from himself because he was not himself. He was the very self of God. And those today who do not understand his message are simply denying the time and space. Because within this time and space there are two things you can do: Blend yourself as pure ones, blend yourself as a totality, and then excel and experience yourself as the being of God: or work your neuroses, get sick, pay the psychiatrist, pay thirty dollars per hour and live on booze and whatever. The choice is now clear and it is so clear because whether you’re in Viet Nam or in India or in Nepal or in Germany or in France or in America or in Argentina, you cannot escape the time and space. These political boundaries shall not bind the spirit.

To carry that message, that inspiration, God chose a great Rishi, a great Tapasia, a great Yogi, a great man of consciousness who did every meditation at Hemkunt and totally merged his consciousness in God. Guru Gobind Singh wrote in his own words, “My consciousness blended totally at the feet of the Lord God and I was awakened. Then I was told by God. ‘Rise! Get up, I’ve got a job for you.'” In his own words Guru Gobind Singh says, “I was in a state of blissful existence, so I said, ‘Can I get out of it?’ and God said, ‘No.'”

The Ninth Guru, Guru Teg Bahadur, was Guru Gobind Singh’s father. For years and years he had meditated and his wife lived the purest life. Therefore there was no soul in the heavens which was pure enough to be granted to these two godly beings. Prakirti was crying with longing, and Purusha was in grace, so God created a union and thus Guru Gobind Singh took his birth. But not without karma! He was born as Gobind Rai – he was never a Singh. It was Guru Gobind Rai who was installed as Guru. When his father gave his life so that the right of the weak should be upheld, he laid down the first principle of the Khalsa: You shall give yourself to protect the weak. Physically, voluntarily you shall go and tell the King that in this political madness the human being cannot be suppressed. 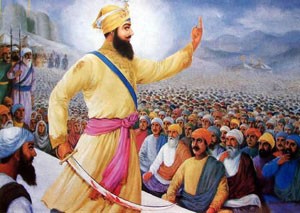 One day a day came when there were hundreds and hundreds of thousands of his followers, and Guru Gobind Rai chose to ask for a head. Because he had learned from his father how to offer the head, he thought that those who followed the path of his father must know in their very tissue how to make that offering.  He said, “Let me see, let me test, let me understand whether in the time to come they will stand and offer. Will they understand God and the love of God? Do they belong to God? Do they know they have come to go? Or shall they be worms of the earth?”

Having learned that lesson which was in his heritage, he spoke: “I need a head!” Everybody started looking left, right, up, down. Some even started meditating, closing their eyes, pretending they never heard. They were in such ecstasy of their meditations that even the word of the Guru couldn’t shake them. They pretended they were the highest because they heard nothing, saw nothing and spoke nothing. But one got up. And Guru said, “Are you not willing to give your head?” That man replied, “I am sorry that you have to ask. I thought you would come and pick it up. Anyway, if you do not understand which head belongs to you, it is mine. Take it.” He showed his strength, there was a vigor, there was a radiance, there was a light. Guru took him inside a tent and then came out with a bleeding sword. Those who were up to that time meditating, pretending to be perfect swamis, yogis, and siddhas freaked out. This was too much. They were whispering, “He’s gone mad! Something has gone wrong. What is going on? What happened to the House of Guru Naanak?”

And then came a thundering voice: “Another head!” Some ran, some turned their backs, and that is where all got divided. Then another Gurmukh (a person surrendered to the Guru’s words) got up and said “Lord, there is no need for shouting. You need this head? Here I am. Do what you need.” The story got repeated and again the Guru came and said, “Hey! I need another head!” And this time they didn’t look at him, but said, “Wait a minute. I am ready. Come on.” Then the fourth. Then the fifth. And then the lightning flashed. The entire spirit of the Gurmukh became the self, the Godhood, and in that ecstasy there came total silence.

It had taken from the First Guru (Guru Nanak) to the Ninth Guru (Guru Teg Bahadur) to enrich us, to infuse in us that spirit. And that day we were thousands but only five had the courage for dying. One great man, one flashing sword, turned us into lions. And now we live his legacy to die before we fall. And in that spirit when those five stood up and came out alive, everybody at that time questioned themselves why they hadn’t gone in. But no, it was meant for five. Because Gobind Rai as God wished him to become Gobind Singh. Then he asked these five, “Give me the Amrit. Baptize me.” Guru Gobind Singh expressed this wish, this desire before the Khalsa, and it is recorded in history, “Waho Waho Gobind Singh Aape Guru Chela.” (Great Great is Guru Gobind Singh – he is both the Guru and the disciple.) The Guru became the disciple and Gobind Rai became Gobind Singh. And thus is was that the body of the Khalsa enshrined him as Guru Gobind Singh. All those who gave themselves to the Guru who became the Khalsa are living in that legacy. 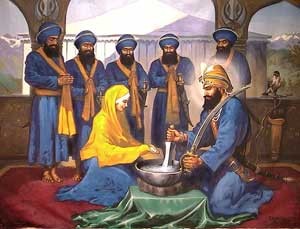 In the Khalsa there is no secret. One asks: “So-and-so Singh Khalsa, on this day to this day have you lived as a Khalsa? Answer me in the presence of the Siri Guru Granth.” And the same way, with the naked sword in his hand, he calls on his being, on his own self. And thus humanity gets the chance to elevate itself in consciousness. There is nothing to worry, my friends, there is no reason to wonder how many we are. When God chose Guru Gobind Singh there were many rishis and brahmins and swamis and god-men and gurus and Sat Gurus of that time who were all meditating in perfection. He could only select Rishi Dusht Dawan. And it is true that Guru Gobind Singh came from the Truth of the self, from the word of Sat Nam, His writing must be dedicatedly truthful, and he says that God persuaded him. “Upanay tudh tohey nivaja,” – “I’ve ordained you as my son to do this job.” And it is a very common thing we always say: “Hey, you being my son, you are supposed to do this.” It is a very ordinary situation which can be seen. A son is supposed to live to the legend of the father, plus more. And thus Guru Gobind Singh was selected.

Now, according to all figures available today, in 34 years it will be the year 2011, and in those years these shall be 4.2 billion more human beings on this earth than we have today.The estimate is between 4 to 4.6 at least. That means by the year 2011 we will be 8.6 billion human beings on this earth. As we have multiplied in 4 million years, that amount we are going to double, come what may. They have taken into account all the self-precautions you use. We are now 4.2 billion people on this earth and we do not know how to handle ourselves. Our inter vibratory neuroses and psychic phenomenon has reached to a point of freaking out. Can you imagine when there will be 8.6 billion people? There will be psychiatric wards and hospitals and doctors and sociologists, and imagine what fashions a woman will create to attract the men? Have you ever thought, have you ever extended yourself into the thought wave length of what shall happen to us as human beings?

That is why Guru Gobind Singh gave us the humanity, as directed by God Himself, a very committed, very excellent discipline as a human, so that the man could experience his highest excellence. He gave us bana, bani, seva, simran; and over and above all he gave us undaunted fearlessness. That is why on the day of Baisakhi we are created from the two-edged sword. Our soul is freed that day. A person only sins and lies and does wrong things when he is afraid. But then, with vows of Khalsa, we become deathless.

Once I was asked, ‘What is the difference between a Sikh and a Khalsa?’ And I answered, ‘Sikh is the seeker of the state of consciousness of deathlessness. Khalsa lives it.’

Today we have sat together to enjoy, to remember, and to remind ourselves. We are not going to be just a handful any more. We are going to be millions, billions and zillions of human beings. And we are going to practice the path of Guru Gobind Singh because this is our privilege, to be here and hereafter. He is not only our Guru, but he is also our father. He took away from us the orphanhood. We never can be orphans. He gave us not the promise of heaven, but he gave us the heavens. He never gave us the message of Son of God – he made us sons and daughters of God. We do millions of fashions and trillions of tricks to be known, to be recognized, and this is one of the human natures, human weaknesses. He accelerated us so that among the thousands and hundreds of thousands, we are unique, and shall continue to be unique, and shall never be in a position to hide ourselves. He took away from us any place of retreat and he set us on the path where we have to just experience everlasting life. “Jivan mukht hoey so jeeah.” We are deathless. We have bowed ourselves before our Guru, before our God, and thus we have earned the right to call: Wahe Guru Ji Ka Khalsa, Wahe Guru Ji Ki Fateh!