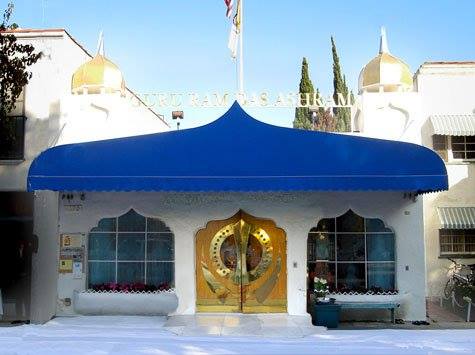 Arriving in Los Angeles in 1968, Yogi Bhajan began his mission to share the teachings of Kundalini Yoga, and to help people live healthy, happy and holy lives.  He first established Guru Ram Das Ashram as a yoga center in West Hollywood, and it was here in Los Angeles that Kundalini Yoga in the Western World was born.

In the spring of 1972, we moved to the current location, a former chiropractic and hydrotherapy office, where it was established as a formal Gurdwara.

Yogi Bhajan lived at Guru Ram Das Ashram until the early 1980s. He resided in the small living quarters in the back, joined by his wife, children and staff.  In that humble living room countless came for his guidance, the Khalsa Council was born, both spiritual and world leaders have been welcomed and our babies were named. What is now our gurdwara with marble floors, then served as a sadhana room and gurdwara in the morning, yoga centre by day, and is where Yogi Bhajan, the Siri Singh Sahib, sat and taught classes two nights a week for over 15 years.

He continued to share his teachings with the Sadh Sangat (holy congregation) here for many years until his passing in 2004.  Yogi Bhajan said, “I am here to serve anyone who says ‘Sat Nam,’ even once.”

Guru Ram Das Ashram is a sacred place, where for over 35 years people of all walks of life have come to be healed, to meditate, to bow to Guru, and to find peace.  The walls of Guru Ram Das Ashram now resonate with the vibration of over 1900 Akhand Paths that have taken place on a weekly basis since those early days, and the chanting, prayer and divine Kirtan from gurdwara services that have been held here 365 days a year since its inception.  Countless individuals have come to partake of the Guru’s langar that has been served daily since the mid-1980s. By Guru’s grace, all of these traditions continue, with daily gurdwara and kirtan, langar, meditation, seva and weekly akhand paths.  Literally the birthplace of Sikh Dharma International, Guru Ram Das Ashram in Los Angeles truly is, to us, the “Golden Temple of the West.”