Courtesy of the Spring 2018 Ministry Newsletter

It is a great honor for me to announce that on February 15, 2018, Sikh Dharma of Argentina was formally recognized as an official religion in our country for the first time in history.

In 2012, I began to develop a relationship with the Guru through the teachings received from Kundalini Yoga and its instructors, and also in my relationships with the Punjabi residents in Argentina who held occasional  Gurdwaras at Casa de Luz, the home of Pritam Baghauti Kaur. 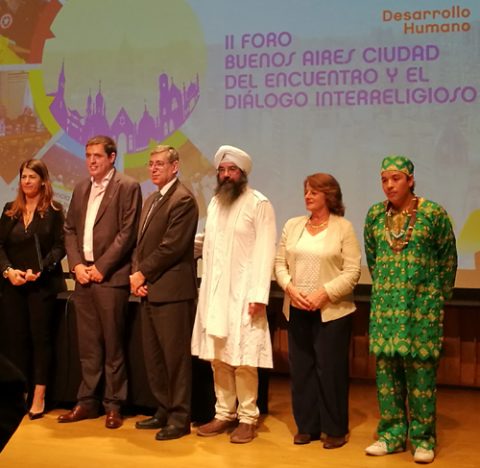 In this way, I observed, not the distances and differences, but the rich and wonderful facets of spirituality that could be integrated of both currents.

After a few years, with the support of S.S. Gurubachan Singh Khalsa from New Mexico, I established myself as Granthi. By the Grace of God and Guru, I took my Sikh Dharma International Minister vows at 3HO Summer Solstice in June 2016.

My wife, Ram Krishan Kaur Khalsa and Gurbani Kaur and I opened a space that integrates a yoga center exclusively dedicated to the teachings of the Siri Singh Sahib, Yogi Bhajan as well as a Gurdwara, which has served as a refuge for Indians living in Buenos Aires, including Sikhs, Hindus, Sindhis, and Muslims. The Gurdwara program is offered in Punjabi and in Spanish.

We have enjoyed four years of harmony and growth—not without challenges—but full of blessings. We teach Gurmukhi, play Kirtan, and teach cooking classes. During this time,  I also began to observe the need to make this path known to the rest of the religions and practices of our city.

I began to participate in roundtables and inter-religious dialogue groups, receiving support from wonderful people who taught me that in order to grow we should be resonating as another “instrument” in the symphony of diverse religions of Argentina. 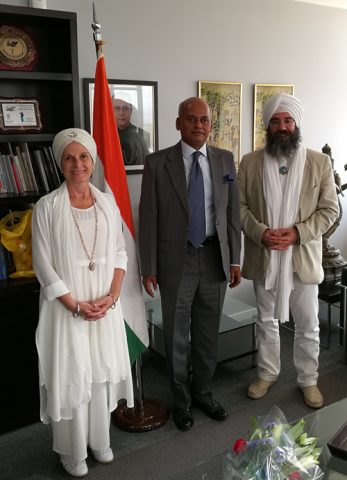 I was able to connect with the Secretaria de Culto (Department of Worship) of the city of Buenos Aires and soon I awakened the interest of the other groups that invited me to give lectures, dialogues, and colloquies of ideas. I participated in all the congresses and forums of religion of the nation. In 2014, I began the process of registering the Sikh religion to be recognized by the state, and I invited a group of Punjabi Sikhs and Kundalini yogis from Argentina to create a civil association, as the first step for state recognition.

After almost four years of negotiations and procedures, fulfilling all the requirements, I am happy to have completed this first step with the tranquility that this legacy, being already part of the official religious landscape, will never disappear, transcending my person.

The community of Indians residing in Argentina are very happy with this official recognition. With the support of the Ambassador of India in Buenos Aires and the National Government, our country will hold the first national census to determine how many Sikhs live in Argentina (first, second and third generation, as well as converts, as is my case). This year for the first time, Sikh Studies will be taught in Argentine universities, a task for which I have been undeservedly appointed.

These have been years of hard work. I offer my gratitude to the Sikh brothers and sisters who day by day share their heritage and knowledge and commit their time in service of the Guru. I am grateful to all those inter-religious leaders and others who advised our process with love and generosity, as well as to the public servants of the governments of Buenos Aires and Argentina so that all of us with our hearts in Chardi Kala have the blessing to receive and celebrate this achievement.

See more articles from the Sikh Dharma community in Argentina