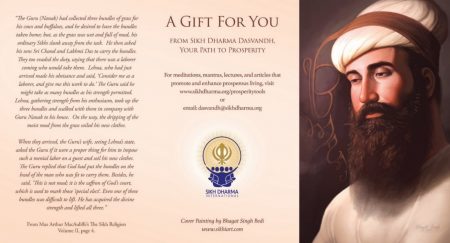 With gratitude for the artwork by Bhagat Singh Bedi of sikhiart.com 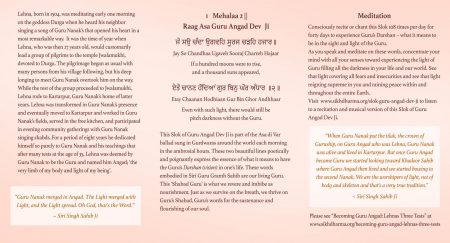 Lehna, born in 1504, was meditating early one morning on the goddess Durga when he heard his neighbor singing a song of Guru Nanak’s that opened his heart in a most remarkable way.

It was the time of year when Lehna, who was then 27 years old, would customarily lead a group of pilgrims to the temple Jwalamukhi, devoted to Durga. The pilgrimage began as usual with many persons from his village following, but his deep longing to meet Guru Nanak overtook him on the way. While the rest of the group proceeded to Jwalamukhi, Lehna rode to Kartarpur, Guru Nanak’s home of latter years.

For a period of eight years he dedicated himself so purely to Guru Nanak and his teachings that after many tests at the age of 35, Lehna was deemed by Guru Nanak to be the Guru and named him Angad; ‘the very limb of my body and light of my being.’

This Slok of Guru Angad Dev Ji is part of the Asa di Var ballad sung in Gurdwaras around the world each morning in the ambrosial hours. These two beautiful lines poetically and poignantly express the essence of what it means to have the Guru’s Darshan (vision) in one’s life.

These words embodied in Siri Guru Granth Sahib are our living Guru. This ‘Shabad Guru’ is what we revere and imbibe as nourishment. Just as we survive on the breath, we thrive on Guru’s Shabad, Guru’s words for the sustenance and flourishing of our soul.

If a hundred moons were to rise, and a thousand suns appeared,

Even with such light, there would still be pitch darkness without the Guru.

Consciously recite or chant this Slok 108 times per day for forty days to experience Guru’s Darshan – what it means to be in the sight and light of the Guru.

As you speak and meditate on these words, concentrate your mind with all your senses toward experiencing the light of Guru filling all the darkness in your life and our world. See that light covering all (take out “your”) fears and insecurities and see that light reigning supreme in you and raining peace within and throughout the entire Earth.

Listen to a recitation and musical version of this Slok of Guru Angad Dev Ji from Sada Sat Simran Singh of Chardikala Jatha:

The Guru (Nanak) had collected three bundles of grass for his cows and buffaloes, and he desired to have the bundles taken home; but, as the grass was wet and full of mud, his ordinary Sikhs slunk away from the task. He then asked his sons Sri Chand and Lakhmi Das to carry the bundles. They too evaded the duty, saying that there was a laborer coming who would take them.

Lehna, who had just arrived made his obeisance and said, ‘Consider me as a laborer, and give me this work to do.’ The Guru said he might take as many bundles as his strength permitted. Lehna, gathering strength from his enthusiasm, took up the three bundles and walked with them in company with Guru Nanak to his house. On the way, the dripping of the moist mud from the grass soiled his new clothes.

When they arrived, the Guru’s wife, seeing Lehna’s state, asked the Guru if it were a proper thing for him to impose such a menial labor on a guest and soil his new clothes. The Guru replied that God had put the bundles on the head of the man who was fit to carry them. Besides, he said, ‘This is not mud; it is the saffron of God’s court, which is used to mark those ‘special elect’. Even one of these bundles was difficult to lift. He has acquired the divine strength and lifted all three.

“When Guru Nanak put the tilak, the crown of Guruship, on Guru Angad who was Lehna, Guru Nanak was alive and lived in Kartarpur. But once Guru Angad became Guru we started looking toward Khadoor Sahib where Guru Angad then lived and we started bowing to the second Nanak. We are the worshipers of light, not of body and skeleton and that’s a very true tradition.” – Siri Singh Sahib, Yogi Bhajan

If you would like one of these altar cards, email your mailing address to give@sikhdharma.org with “Altar Card Please” in the subject line.  Specify in the email that you would like to receive the “Guru Angad” altar card.

*We would like to offer special appreciation for the artwork of Guru Angad used for this altar card by Bhagat Singh from www.sikhiart.com

“I’ve absolutely fallen in love with this Pauree after receiving the altar card. Thank you! Wahe Guru.”  ~ SDI Community Member

For meditations, mantras, lectures, and articles that promote and enhance prosperous living visit our Prosperity Tools Page or email dasvandh@sikhdharma.org