The Siri Guru Granth Sahib began to be translated in Spanish in 1975. Six years had passed since Siri Singh Sahib, Yogi Bhajan had come to America. By then he was teaching Kundalini Yoga and inspiring thousands of students who were in turn becoming inspired by Sikh Dharma.
Yogi Bhajan was a master spiritual teacher who touched many hearts and even years after his passing still touches the hearts of many people around the world– people of many cultures and backgrounds, but all with a focused purpose — to find God within themselves.
The Siri Guru Granth Sahib has opened many hearts and the Shabad Guru has elevated their consciousness and they are living healthy, happy, and holy lives. Yogi Bhajan brought this knowledge to the West and was responsible for many people around the globe adopting Sikh Dharma through first practicing Kundalini Yoga.

BabaJi Singh was one of those students who opened his heart through the inspiration of Yogi Bhajan. He was born in Mexico City in 1947; raised in a Catholic family, he finished his studies in a Jesuit University in Mexico, Universidad Iberoamericana.

In 1970, as soon as he finished college he left for Alaska. As he passed through Los Angeles, California, he was attracted to a group of young people dressed in white. He then learned of the ashram there.  He met Yogi Bhajan and adjusted his travel, then staying to study yoga and meditation with him.

He went on to become yoga teacher himself, returning to Mexico to open the first 3HO (Healthy, Happy, Holy Organization) Ashram in its capital city, Mexico City, and teach Kundalini Yoga, himself inspiring many students as Yogi Bhajan had inspired him. He became a Sikh and later a minister.

The Ashram began to be a success. A lot of people began to live in the Sikh Dharma lifestyle. They all wanted to understand the words of Siri Guru Granth Sahib Ji, but there was no Spanish translation available.

When Babaji became 28 years old a very strong cancer invaded his body. It was then that the Siri Singh Sahib ordered him to translate the Siri Guru Granth Sahib. Babaji Singh was cured. He survived not only that cancer, but 3 more. He died of a fourth, 31 years later, happy grateful, and blessed.

He found in translating the Siri Guru Granth Sahib to Spanish, the sense and purpose of his life. The Guru gave him courage, wisdom, patience and grace to go through the physical pain without suffering from it. Babaji Singh was a happy man. 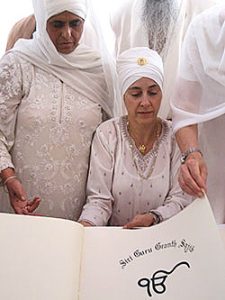 When his wife, Guru Amrit Kaur Khalsa met him – she found him a happy man in 1999. He told her that he was not going to die until he finished the complete translation and transliteration in Spanish. It was his destiny. He wanted to honor Yogi Bhajan’s words.

He translated the Siri Guru Granth Sahib from Gopal Singh’s English translation over a period of 30 years. He was working at the same time, teaching yoga, in the evenings, and spending long periods of his life in hospitals or in bed.

In the last 3 years of his life, he worked with his wife in the early morning translating. She remembers him writing with so much devotion and love, researching the exact meaning of every word, hoping the Spanish speaking community could be able to read and understand the beauty of each word.

In 2006, he was diagnosed with the cancer again. After one of the several surgeries he had that year, he said to his wife, he wanted to die at home at the Ashram. At that time the translation had gone to print. His agony lasted 6 days. Because his kidneys were not working, he began to lose consciousness the third day.

The day prior, he had asked for the printed translation as he wanted to see it in finished in print. He had asked for the best imported Spanish fabric for the cover and wanted to be sure that the printing was well done. A group of his devoted students were in the Print House in prayer to the Creator to be able to bring this to him before he passed away. They knew that their spiritual teacher was losing consciousness and if late, he would not be able to see it.

That night Babaji went into a coma which brought a great sadness to all around him. The next day all the community gathered with chanting and prayer until the Spanish translation of the Guru arrived with the students.

Babaji Singh woke up for a moment, read the Mul Mantra at the start of Japji, with difficulty but with a spark and light in his eyes. He lost consciousness after this blessing and died 2 days later with the Mexican community reading for the first time the Siri Guru Granth Sahib in Spanish.
The first Akhand Paath, the traditional Sikh non-stop reading of the Siri Guru Granth Sahib, was performed in Mexico the 17th of November 2006. 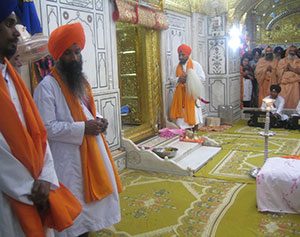 In October 2008, in Nanded, at the Tercentenary Celebrations of the Guru Gaddi of Siri Guru Granth Sahib, the Spanish translation was presented to the Takhat there in acknowledgement of the Shabd Guru’s spread around the world since the Guruship was passed by the tenth Sikh master Guru Gobind Singh to the Siri Guru Granth Sahib. Babaji Singh’s widow, Guru Amrit Kaur Khalsa from Mexico, is there, and has facilitated the presentation of the work in honor of the Tercentenary.

She is participating with a Yatra of devotees from all over the world from Sikh Dharma International an organization founded by Siri Singh Sahib Yogi Bhajan who for over 30 years of traveled and taught around the world bring the spiritual technology of Sikh Dharma, helping to establish the practice of Sikh Dharma in this hemisphere.

There are an estimated 24 million Sikhs world-wide. People all over the globe draw inspiration from the Sikh teachings.