As part of the Raj Khalsa Yatra, we will have the opportunity to visit this exquisite Bahá’í  place of worship.  Here is some information about it.

About the Lotus Temple

The Lotus Temple, located in New Delhi, India, is a Bahá’í House of Worship completed in 1986. Notable for its flowerl-ike shape, it serves as the Mother Temple of the Indian subcontinent and has become a prominent attraction in the city. The Lotus Temple has won numerous architectural awards and been featured in hundreds of newspaper and magazine articles. Like all Bahá’í Houses of Worship, the Lotus Temple is open to all, regardless of religion or any other qualification. The building is composed of 27 free-standing marble-clad “petals” arranged in clusters of three to form nine sides, with nine doors opening onto a central hall with height of slightly over 40 meters and a capacity of 2,500 people

The Bahá’í laws emphasize the spirit of the House of Worship as a gathering place where people of all religions may worship God without denominational restrictions. The Bahá’í laws also stipulate that not only the holy scriptures of the Bahá’í Faith, but also those of other religions can be read and/or chanted inside the House of Worship.  While readings and prayers can be set to music by choirs, no musical instruments can be played inside. Furthermore, no sermons can be delivered and there can be no ritualistic ceremonies practiced. 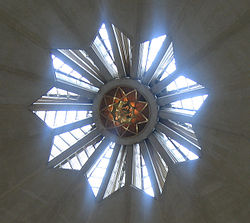 About the Lotus Temple Structcure

All Bahá’í Houses of Worship, including the Lotus Temple, share certain architectural elements, some of which are specified by Bahá’í scripture. `Abdu’l-Bahá, the son of the founder of the religion, stipulated that an essential architectural characteristic of a House of Worship is a nine-sided circular shape.  While all current Bahá’í Houses of Worship have a dome, this is not regarded as an essential part of their architecture.  Bahá’í scripture also states that no pictures, statues or images be displayed within the House of Worship and no pulpits or altars be incorporated as an architectural feature (readers may stand behind simple portable lecture stands).

Inspired by the lotus flower, the design for the House of Worship in New Delhi is composed of 27 free-standing marble-clad “petals” arranged in clusters of three to form nine sides.  The nine doors of the Lotus Temple open onto a central hall slightly more than 40 meters tall that is capable of holding up to 2,500 people. The surface of the House of Worship is made of white marble from the Penteli Mountain in in Greece, the very same from which many ancient monuments and other Bahá’í Houses of Worship are built.  Along with its nine surrounding ponds and the gardens, the Lotus Temple property comprises 26 acres.

This information was referenced from Wikipedia