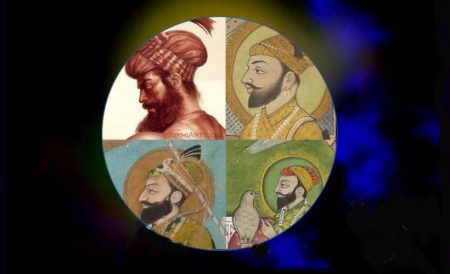 In this video, we will learn about the original Dumalla, what I call the Puratan Dumalla.

It is our Gurus’ turban.  We will also learn how to tie this type of Turban.

I call it the Puratan Dumalla, to avoid confusion with the modern Nihang Dumalla. It’s a different style of turban.

This is the type of turban India’s greatest kings wore.

Rajput Kings and Kings from different parts of India wore this turban.

It is the turban of Kings.

It was particularly famous in Medieval India from 1400s to 1700s.

This style of turban started dying during the 1800s.

It died by 1900s during the British Raj. It’s no longer seen today.

No one wears it. No one knows about it. And no one knows how to tie it.

Hindi movies and serials are filled with Mughals and Rajputs wearing cartoony cap-like pseudo dumallas, with their cut hair sticking out the back.

Whereas Punjabi movies and serials don’t have any idea that the Sikhs even wore such a turban in the first place.

So I’m trying to revive his traditional style of dumalla so that our ancestral knowledge is preserved for future generations.

I have been learning how to tie this turban for the past 5 years, and I believe I have finally cracked the code.

I have figured out how to tie it and I will share this knowledge with you guys today.

You may notice hints of Patiala Shahi turban, modern Rajasthani turban, Bhangra turban, and of course the modern Nihang Dumalla.

So to tie this turban, you will need –

Dumalla refers to that bit that is flaring out of the top. It is also called farla, turla, sirra, it has multiple names. Today we call the Nihang Turban a dumalla, but in old times, it was this fan bit that was called Dumalla. (Bhai Kahn Singh ji Nabha, Mahan Kosh)

Nope. If he did, then his portraits would’ve shown that style of turban.

The tall, conical Nihang Dastaar did not exist prior to 1800s. It emerged in Sikh art during mid 1800s.

No. Showing Guru Gobind Singh ji with chakras on his turban is a modern trend started by Sobha Singh. We don’t see it in his portraits before Sobha Singh’s paintings.

The trend of wearing chakras on turban started in 1800s with Nihangs. Though keeping weapons inside a Turban is a much older trend.

In old times, they probably hid a dagger in it, slid it in and out from the back.?

Q4. Did Shivaji Maratha tie a turban like this? Didn’t he tie a different conical one?

Yes he tied this one. The conical, coiled one is a modern depiction only. He wore a Puratan Dumalla.