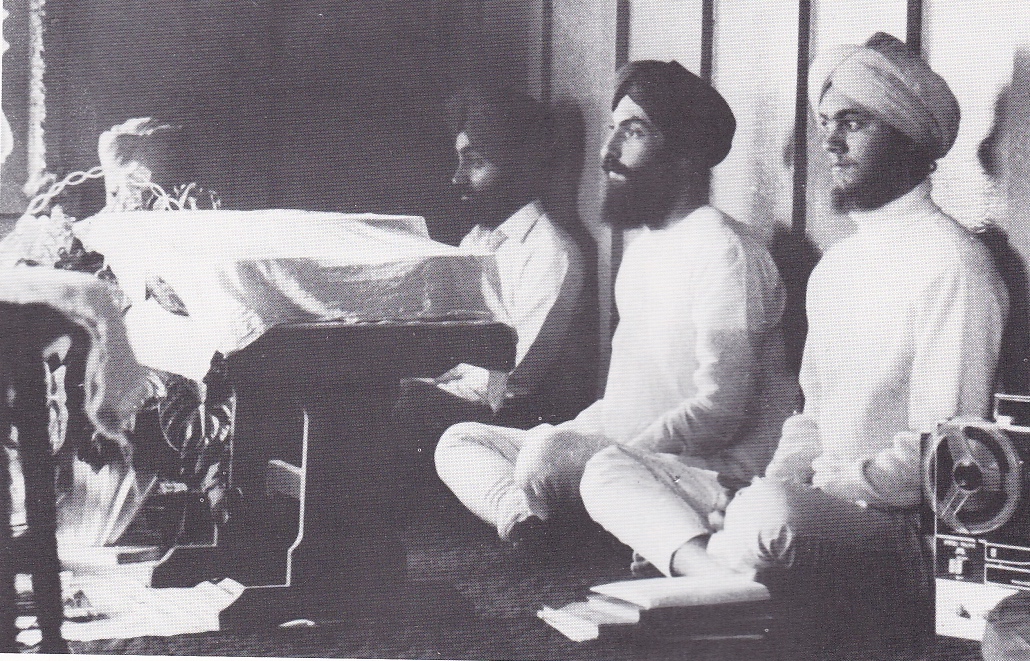 This post is excerpted from the book The History of Sikh Dharma of the Western Hemisphere, by S.S. Shanti Kaur Khalsa, published in 1995 by Sikh Dharma International.

On Baisakhi Day, 1970, two young students decided they wanted to “officially” become Sikhs and requested that Yogiji initiate them.

At that time and many times since, he replied,

“My birth and my life and my end are meant to serve, to console, to inspire, to share the sufferings and to take the suffering, and that is my happiness. I firmly, honestly and truthfully feel that I am much, much, and very much lower than the dust under the feet of those who have uttered ‘Sat Nam’ once, and that too by mistake. You remember when I came to the United States? Up to this day, I have not initiated any single person. How can I initiate any man into a spiritual way of life when he himself is born out of the Infinite Soul?”

Charged with spiritual energy and vision, they presented themselves before the Siri Guru Granth Sahib dressed in white and with beautiful white turbans. When they announced their intentions to the sangat, the Gurdwara management did not know what to do with them! They had never seen someone who was not of Indian origin wanting to become a Sikh. One of them phoned Guru Ram Das Ashram to ask Yogi Bhajan what he thought they should do. He advised them that all they had to do was give these young men to the Siri Guru Granth Sahib. That was all.

A simple ceremony was improvised on the spot. Two men from the congregation offered their own karas so that the new Sikhs could have them to wear. These two young men with sparkling eyes and pure hearts were presented by the Gurdwara President to the sangat. In the weeks that followed, many more yoga students took Sikh vows.

For the first time in history, people of the western world were adopting the form and teachings of the Sikh Gurus, bowing their head to the Siri Guru Granth Sahib.

In Los Angeles, Yogi Bhajan’s students began attending Sunday morning Gurdwara services at the Sikh Study Circle with him. Because of their love of devotional music, several students learned to sing Gurbani Kirtan. Even though Gurmukhi script was difficult for the American Sikhs to learn, they were longing to understand the prayers and mantras they were reciting daily.

Taking translations of the Sikh daily prayers, Sardarni Premka Kaur was absorbed for weeks writing them in poetic verse that could be easily understood by western Sikhs. The resulting book, Peace Lagoon, contained translations of the daily prayers of the Sikhs, known as the banis, as well as selections from the Sukhmani Sahib, the Lavan — the wedding prayer of the Sikhs, and the Sidha Gosht of Guru Nanak. In the summer of 1971, Peace Lagoon was published by the Brotherhood of Life Bookstore in Albuquerque, New Mexico. It is still today the primary translation used by people new to the Sikh faith in the West.

Even so, this was not enough to quench the inexhaustible desire of the new western sangat to learn the teachings of the Sikh Gurus. They were yearning to experience this knowledge firsthand, directly from the source. In August of 1971, Yogi Bhajan was able to obtain copies of the English translation of the Siri Guru Granth Sahib by Manmohan Singh and distributed them. A wave of breathless excitement rippled through Sikh Dharma as the Guru was lovingly installed in the Guru Ram Das ashrams.

Yogi Bhajan deeply ingrained the love and devotion for the Siri Guru Granth Sahib in the hearts of the new Sikhs.

This is the miracle of the rebirth of the Khalsa, ‘the pure ones,’ which even the ordinary man can understand, but only the faithful can practice. What a great moment it is on this day that we are reciting these words, as Guru Nanak got hold of this idea and left it to Guru Arjan to compile the words of the Guru’s and the men who were immersed in God – consciousness, so that we who are to follow can exactly recite and train ourselves in that state of ecstasy of consciousness.”

This post is excerpted from the book The History of Sikh Dharma of the Western Hemisphere, by S.S. Shanti Kaur Khalsa, published in 1995 by Sikh Dharma International.

Read an article where Livtar Singh recounts his experience