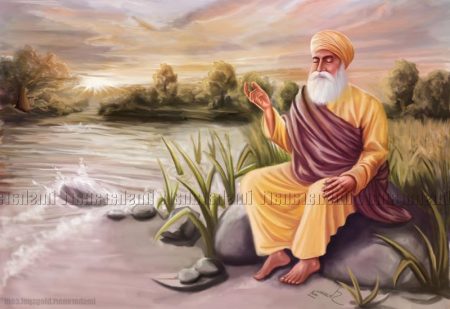 Shabad – the sound that cuts the ego. Guru – the wisdom that takes us from darkness to light. In his teachings, Yogi Bhajan, also known as the Siri Singh Sahib of Sikh Dharma, taught that the Shabad Guru would become the guiding wisdom for people in the Aquarian Age.

But what, exactly, is the Shabad Guru? How does it work? Why is it important? And where does it come from?

To understand the Shabad Guru as Yogi Bhajan talked about it, we have to first understand the life and history of a very universal spiritual sage by the name of Guru Nanak.

Guru Nanak lived in the late 15th and early 16th centuries in what is now northern India. He lived at a time when there was tremendous social and economic inequality among people; when the degradation of women was a prominent part of society; when religious intolerance was everywhere. As a young child, he looked at the way human beings treated each other and began to search for a better way.

Over time, through interviewing and studying with every master, sage and yogi he could find, Guru Nanak discovered his answers. He had an enlightenment experience that showed him the true nature of Creation, of human life, and how it all worked together under One Creator. After his awakening, he recorded his experience in a song called Japji Sahib.

According to the Siri Singh Sahib, Yogi Bhajan, Guru Nanak was a master of sound. In Guru Nanak’s time, only a human being could be considered a Guru. Yet, when people asked Guru Nanak who his Guru was, Guru Nanak would reply, “The Shabad.” Guru Nanak did not look to another person to guide him. In his mastery of sound, he could meditate, penetrate into the etheric realms, and simply hear the Universal Wisdom that calls the soul home. All teachings, all traditions, all books of wisdom are a tiny expression of that Sound of Wisdom. Guru Nanak had such a profound level of mastery, he could perceive and hear that Universal Sound directly. He referred to it as the “shabad” or as “gurbani” – the frequency of divine guidance. When Guru Nanak sang a song, he served as a channel for the Shabad. The songs he wrote become a living manifestation of the Shabad Guru. Then, other people could meditate upon these songs and awaken themselves.

Japji Sahib begins the Aquarian Sadhana. Many of the practices within Kundalini Yoga as taught by Yogi Bhajan use mantras or segments from Japji Sahib as part of the practice. Yogi Bhajan anchored the ancient technology of Kundalini Yoga into this relatively new practice of the Shabad Guru for a simple reason. In the Age of Aquarius, no human being will be in a position to guide or lead another human being. Each person will need to awaken himself or herself. The highest teacher in Kundalini Yoga is the Shabad – the sound of wisdom that cuts away the ego and brings a person to see the light of his or her own soul.

After his awakening, Guru Nanak travelled on foot far and wide to teach people how to use the sound current to awaken their own souls. As he travelled, the Sound of Wisdom would come to him. He wrote many hundreds of compositions that could bring the human mind to the frequency of Infinity. He recorded all of these songs in a book. Guru Nanak never claimed to be the composer of these spiritual teaching songs. Instead, he would say, “Bani is coming to me.” The Shabad would come to him and express itself through him.

Guru Nanak did not simply save his own songs in this book. As he traveled, he would hear the spiritual songs of other wise people from different backgrounds and traditions. In his status as a master of sound, he could tell from listening to the composition whether it was a pure expression of that Universal Etheric Wisdom or not. When he found a song that matched the frequency and vibration of Divine guidance, he recorded it, as well.

In this way, Guru Nanak’s life became an embodiment of one of his teachings – that the Guru, the Divine Teacher, can express itself in many different forms and in many different ways. And that no one tradition has a monopoly on wisdom. Rather – it is the duty of the human being to cultivate the inner awareness so that person can see the same One Light of the Divine in all.