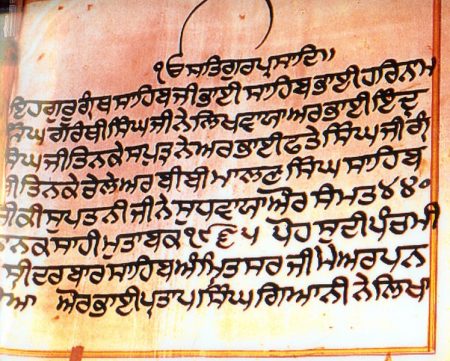 Many people who practice Kundalini Yoga as taught by the Siri Singh Sahib – Yogi Bhajan love the mantras and chants. But where did these chants come from? What language are they written in?

Guru Nanak named Guru Angad to succeed him as the Guru for the Sikhs in 1539.  Guru Angad, the second Sikh Master, standardized the Gurmukhi script. Gurmukhi means “from the mouth of the Guru.” The Gurmukhi script accomplished something very special. It allowed people to be able to read and pronounce the songs written by Guru Nanak. Up until that point in history, the dialect spoken by Guru Nanak and his contemporaries had no written equivalent. Written languages were reserved for the powerful, the wealthy and the high-castes. There was no writing or reading based on the common language.

Gurmukhi was developed to be a very precise phonetic script. By learning to pronounce Gurmukhi, people could not only learn to read and pronounce the songs written by Guru Nanak; they could also learn how to pronounce the songs that Guru Nanak had preserved during his life from other masters and sages, even if those songs were in a completely different language. The purpose of Gurmukhi was not to simply represent a common language spoken by many at that time, but to allow people to read and sing sacred songs in other languages, as well.

Why did this phonetic script develop? And what does it have to do with the Shabad Guru – the Guiding Sound of Wisdom?

Being awakened or enlightened is not simply a mental state. It is a physiological state, as well.  How we breath, how the glands secrete, how the nervous system is operating – all of this changes based on what we speak, what we hear, and what we perceive. When Guru Nanak sang his songs, the words he brought forth had a two-fold effect. On the level of language, they imparted a certain philosophical meaning of how to see the world. But in the science of Naad (sound), the songs have the ability to change the physiology of a person and bring them to a more heightened state of consciousness.

The invention of Gurmukhi was key to opening the doors of the Shabad Guru to all people. Through learning this very simple, precise method of pronunciation, and by repeating the words of the sages, you begin to induce in yourself the same state of consciousness that they were in when they sang the songs. It begins to create the same changes in the physiology. It opens the door to higher awareness. And all that is required is your breath and voice imitating and repeating those sounds.

This is the essence of the Shabad Guru. It is between you and you. There is no one else involved.  It only requires your breath reciting this sacred poetry. By doing this practice, there is a process you undergo within your own ego and identity to transform your awareness to live at these heights.

If you would like to read more about the particular effects of some of the banis, or sacred songs that people practice on a regular basis, click here.

The Shabad is My Guru: Understanding the History of the Shabad Guru: Part 1