Your Home Away from Home at the Heart of the Khalsa

Anandpur Sahib is a spiritual haven known world-wide as the Home of the Khalsa. At Dashmesh Sadan, the Siri Singh Sahib, Yogi Bhajan envisioned a Teaching Center to be established for all seekers from around the world to gather and have an opportunity to learn and excel in the highest of consciousness.

At Dashmesh Sadan there is an opportunity to rest, relax and enjoy the hill country, long walks on the Guru’s land, and beautiful gardens, set in 4 acres of green Punjabi farmland and the beautiful Himalayan foothills of Anandpur Sahib. Here is an extraordinary opportunity to witness and learn the history of the Gurus and visit the many historical Gurdwaras in the area. We invite you to join the many groups who come to experience the living legacy of Siri Singh Sahib Ji’s Teachings!

Teachers – YOU are invited to join us! Bring your students to have an experience in Anandpur Sahib. We will assist you to plan a course, or an extended stay during your Yatra. Dashmesh Sadan can host up to 50 students at one time. It is really true what Siri Singh Sahib Ji said about Anandpur Sahib: “It is the best in the sense it has the mountains and plains, and air from both meets there – the valley of the crosswinds. There is nothing like it. Guru Gobind Singh Ji chose it. He was not wrong.   So we built there. Teach a course and see what happens.” Come and experience!

Dashmesh Sadan is set in the foot hills of the Himalayas…the Gharwal mountain range surrounds every side. Feast your eyes on the same mountains Guru Gobind Singh looked out over 300 – 350 years ago.It is a wonderful, lush, historical jungle area, once home to elephants, which is set against the hills and rolling rich agricultural landscape. It was visited by Guru Nanak, then discovered by Guru Hargobind Ji, the land then purchased by Guru Teg Bahadur Ji. Three of the four sons of the Tenth Master were born here, played and trained here.

This geography was chosen as a strategic landscape, Guru Teg Bahadur Ji settled his family here, and Guru Gobind Singh Ji’s 6 forts were points of look out and defense. Many battles were fought in the foothills in the Name of Truth. Bhai Ghanaiya, the world’s first known ‘Red Cross’ sevadar, aided and served injured friend and foe alike, just over the canal from Dashmesh Sadan. Just a short drive away Guru Hargobind raised his family. Enlightened souls who became Guru were born nearby. You are literally walking in the footsteps of our Gurus in Anandpur Sahib and surrounding area.

The crown jewel of Gurdwaras here is Takhat Keshgarh Sahib – where Guru Gobind Singh Ji baptized the Punj Pyare and they in turn administered Amrit to him.  Here are preserved many of the Tenth Master’s weapons that are shown daily at about 9 pm (and 7:30 Sunday mornings).  The exquisite Sword of the Khalsa donated by the Khalsa of the West during the 300th Anniversary of the Khalsa in 1999, has the honor of display with the weapons (Shastra) of Guru Gobind Singh Ji seen by the Sangat daily.

Anandpur Sahib is at about the same latitude as the border between Mexico and the US.  It’s humidity is fairly dry except in the monsoon season in late June through August.  The hottest months are May and June; and the coldest are November through February.  The municipality has about 14,000 residents.  The larger Anandpur Sahib Region is comprised of 128 villages.  For more information on Anandpur Sahib and the district of which it is part ~ District Rupnagar, plus more on climate, statistics, and additional places of interest – visit the District Rupnagar website 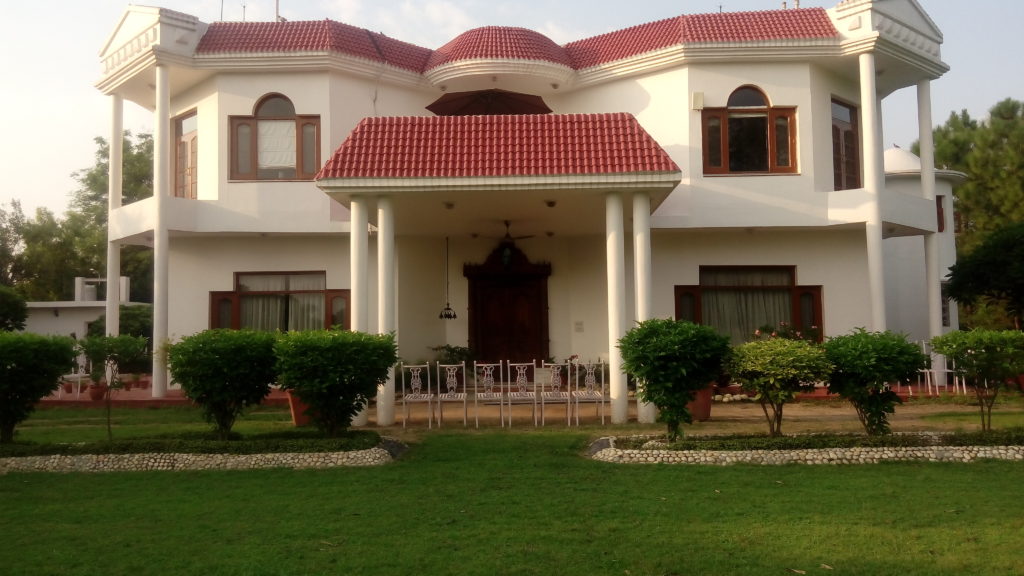