How to Setup a Gurdwara in Your Home 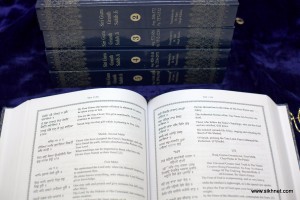 Traditionally, a one volume “bir” of the Siri Guru Granth Sahib, which is written in the Gurmukhi script, has been used to read in Akhand Paths.  However, if you do not read Gurmukhi, you may also use volumes with both the Gurmukhi and a translation into another language.

If you don’t already have one, here are some options for where to get copies of the Siri Guru Granth Sahib.

Rumallas are the “clothes” used to wrap and cover the Siri Guru Granth Sahib.  They are usually made from  beautiful fabrics and often decorated with ornate embroidery and beading, particularly for a special occasion at the gurdwara like a wedding.  There are many rumalla makers in India and you can purchase them there or in other countries where they have been imported.  If you are skilled at sewing, you can make your own.  Below is an example of some children who made rumallas for the Guru in their community.  We also have rumallas available for purchase on our Marketplace.  If you’d like more information about rumallas, feel free to contact us at [email protected]