Some of the information below has been adapted from Living Reality by Dr. Bibiji Inderjit Kaur.  You may also refer to our blog for many articles about Sikh history 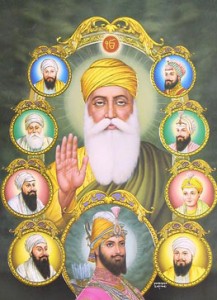 From the late 15th century to the beginning of the 18th century, ten successive Gurus consciously channeled and acknowledged the power of the Shabad Guru. These Gurus lived, travelled and taught in what is now India and Pakistan. Their lives spanned a period of 239 years. They revolutionized the spiritual, social, economic and political life of their time.

All ten of the Sikh Gurus clearly stated that they were human beings. They were simply blessed with the capacity to hear, channel and share the Sound of that Universal Teacher for others to hear.

“Sikh” means “Seeker of Truth.” During the time of the Sikh Gurus, the community of believers was diverse, multi-cultural and interreligious. It was only later that the term “Sikh” began to refer to a specific group of people. At its origin, Sikh Dharma meant “the spiritual practice of one who is looking for truth.”

500 years ago, these ten Sikh Gurus taught the equality of men and women. They taught that no group of human beings was higher than any other group. And they claimed that the common brotherhood and sisterhood of the human race was the highest reality. Their teachings empowered people to break the caste system, to overcome social habits that harmed women, to become economically self-sufficient, and to create a tolerant society based on the common humanity of all people.  Click Here to Find Out More About the Ten Sikh Gurus 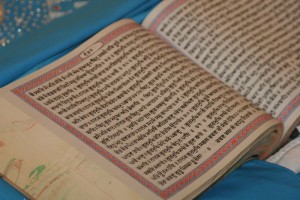 At the end of his life, in 1708, Guru Gobind Singh passed the mantle of the Guruship to the Siri Guru Granth Sahib. This ended the time of the physical masters of the Sikhs. And began the reign of the Shabad Guru, itself, as the Spiritual Light and Guide for the Sikh community. read more > 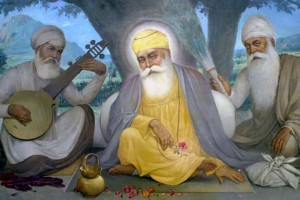 Guru Nanak was a master of sound. In Guru Nanak’s time, only a human being could be considered a Guru. Yet, when people asked Guru Nanak who his Guru was, Guru Nanak would reply, “The Shabad.” Guru Nanak did not look to another person to guide him. In his mastery of sound, he could meditate, penetrate into the etheric realms, and simply hear the Universal Wisdom that calls the soul home. All teachings, all traditions, all books of wisdom are a tiny expression of that Sound of Wisdom. Guru Nanak had such a profound level of mastery, he could perceive and hear that Universal Sound directly. He referred to it as the “shabad” or as “gurbani” – the frequency of divine guidance. When Guru Nanak sang a song, he served as a channel for the Shabad. The songs he wrote become a living manifestation of the Shabad Guru. Then, other people could meditate upon these songs and awaken themselves. For more information on Shabad Guru, Search Shabad Guru on Our Blog