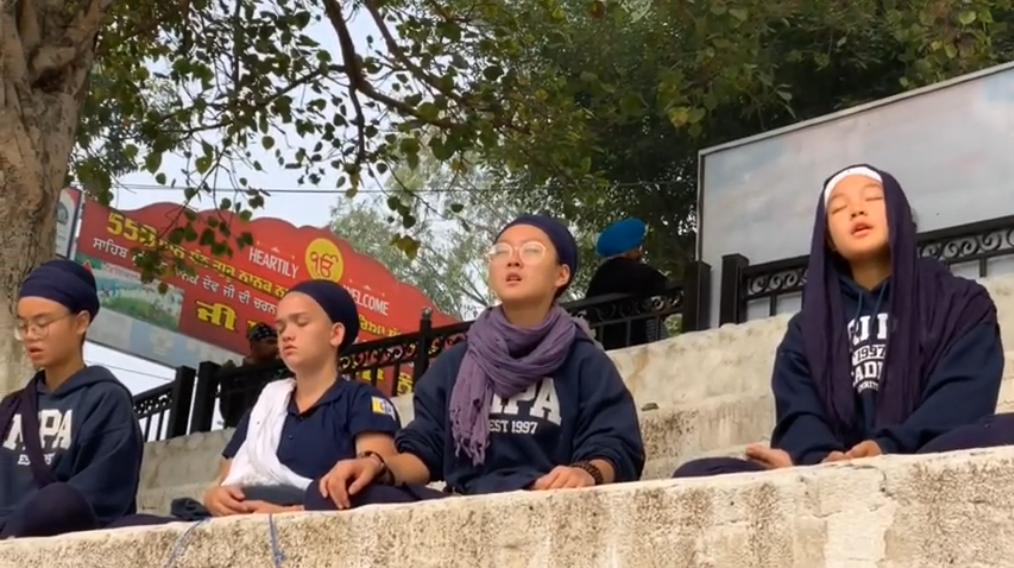 Guru Nanak Dev Ji, the founder of Sikhism, spread the truth of ‘Ek Ong Kar,’ we are one with the creator. His birth anniversary every year is widely celebrated, but this year was a little different, being the 550th birthday. Sikh sangat members from all over the world celebrated by going to Sultanpur Lodi, where Guru Nanak was born and meditated for a long time. This also included us, Miri Piri Academy students.

We arrived there fairly early in the morning, starting the day right away with just enough time for us to put our bags away and tie our best tight turban for the Nagar Kirtan. Almost every Sikh celebration has Gatka involved (a type of Sikh martial art.) Sparring in front of crowds the first time can be intimidating but it’s probably one of my favorite things to do. It is a practice of focus to not get hit and to attack, with all the chaos going on around you. And when I say chaos, the scenes during big festivals are crazy.

This time we saw an elephant that was part of the procession. It was not huge, but still very impressive to see as it calmly lowered its trunk to help a Nihang climb on its back. Besides elephants, horses were of course also involved, hooves click-clacking alongside human steps and the beat of the Dhol (drum). This type of drum has a very upbeat sound which is used to accompany Gatka processions and uplift the general mood of the crowd, keeping the atmosphere buzzing with noise. Hearing it gets me really pumped up, inspiring me to spar even harder and faster.

Though we didn’t have as large a Gatka squad as we usually would have, we still did our best and with full spirit. Later in the day, along with Yogi Bhajan’s son Kulbir and his wife, we went to meet the respected warrior saint, Baba Nihal Singh who is 77 years old. He is still traveling around Punjab with his Nihangs and being wherever the spirit of chardi kala is needed. His presence could be felt in the whole room we were sitting in, which kept me wondering what it would’ve felt like to be in the presence of Guru Nanak himself.

Did he talk a lot? What did his voice sound like? He traveled around India singing hymns of god with Mardana. This type of devotional form of prayer is still practiced to this day, indicating the long-lasting legacy and remembrance of God through Simran. Likewise, we also played kirtan that night.

Our principal, Jugat Guru, being part of Chardikala Jatha, performed in this humongous tent that was set up, which allowed at least a thousand to be seated. Cameras were set up live broadcasting everything. Different Jathas and famous musicians from around the world came to play hour after hour, all devoting their shabads to Guru Nanak. I was sitting with my peers and the Yatra that came from far away, and many other people who shared this moment with me. Though Nanak’s physical body wasn’t present, his legacy was living in every single molecule vibrating around us.

The next morning around 2 a.m. we woke up to walk to the river where Nanak disappeared for three days and three nights, afterward appearing on the third day and invocating Japji. So the river is a very holy site where people come to dip and feel its blessings. Me and my friends weren’t aware that that’s what we were also going to do, so we didn’t prepare anything! No towel, no clothes to change, nothing. But since it was a once in a lifetime thing, we just used our dupattas as towels and bore the tiny discomforts we had. MPA training.

I was amazed when we plunged into the icy cold water, how could he have stayed in here for three days and nights? For me, it was too freezing to think about anything other than what we were chanting. We also meditated on Mul Mantra by the river and did even more kirtan at the big tent.

But all this finally had to come to an end after two days in which we said our goodbyes to this holy site and the peaceful river. I can’t speak for others, but I feel sure everyone took something valuable from this experience. All of my class expressed their unwillingness to leave. I didn’t know Guru Nanak, neither am an expert on his life or his teachings, but having the fortunate opportunity to be part of this legacy is such a blessing and something much to learn from. I am grateful for what it offered to people around the world and the spiritual upliftment. I pray for the continuity and hope it will spread even wider to touch the hearts of others.