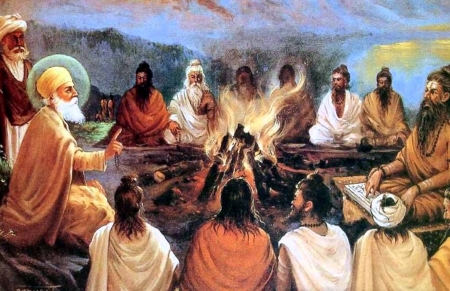 There are some people who claim there is no relationship between yoga and Sikhism. However, Yogi Bhajan talked about it very differently. He carried the oral tradition of the Punjab with him when he came to the West. Part of that oral tradition was recognizing the interplay between the ancient yogic teachings that predate Sikh Dharma by thousands of years, and the Sound Current of the Shabad that the Sikhs Masters manifested through their teaching.

“He was a yogi and he had the jal samaadhee. Jal samaadhee means he went under the water and came out after three days. When he came out, he uttered the words Sat Naam and after that he uttered Japji.”

To put this in context, Guru Nanak was born in 1469 into a relatively high caste Hindu family. At a very young age, he began questioning everything: the empty rituals that seemed meaningless; the arbitrary division of people based on caste; the lower status of women. Guru Nanak was famous for challenging his family, his elders, and his society—not in a rebellious way, but like a devoted son trying to wake others from a self-imposed sleep.

Guru Nanak searched far and wide to learn everything he could about truth and human consciousness. He studied with yogis. He studied with scholars. He searched and questioned everyone. In the end, the way Yogi Bhajan describes it, Guru Nanak, himself, practiced yoga and attained a very high state of realization. The story goes that one morning, while taking his bath before his meditation, Guru Nanak immersed himself in the water and did not resurface for three days. His breath became so still and so deep that he could sustain himself under the water. During those three days, he had his enlightenment experience. He saw the Cosmic play of Divine Consciousness, and the role and purpose of human life within it.

After having this vision, Guru Nanak recorded his experiences in Japji Sahib, The Song of the Soul. Japji Sahib is Guru Nanak’s own description of his own enlightenment experience as a realized yogi. But the gift of Japji is the power of the Shabad Guru, the teacher who manifests through the Sound Current. When Guru Nanak recited Japji Sahib, he brought a new spiritual technology to humanity. Reciting Japji with devotion and love will allow a person to slowly, over time, develop the ability to see what Guru Nanak saw. The Shabad can take a person to that place of light and merger with the Divine, even if that person is not a particularly adept or advanced yogi.

In Guru Nanak’s life, we can see the dynamic relationship between yoga and Sikh Dharma. The ancient teachings of yoga have tremendous power and merit. But it is through the Shabad, the Sound Current, that an average, every day person can be awakened to the same state of consciousness which was formerly reserved for the ascetics. This is why in Kundalini Yoga, every exercise includes the Sound Current. If no mantra is given, we still inhale “Sat” and exhale “Naam” with an exercise. As we open our centers through the practice of Kundalini Yoga, the Sound Current of the Shabad helps move and clear the blocks faster. It takes us to an ever more refined state of consciousness.