We had plumbed the lines and dug the troughs,
and laid the rebar, so it would be strong enough,
The conduits were in and the forms were set,
but when the concrete came, it was much too wet.

We had to shovel and nurse it all day,
We had to push so the forms would stay,
The October sun and the bright blue sky,
Watched us work and kept our spirits high.

The day wore on and began to fade,
But by the end we had set the grade,
The sun pitched down and headed West,
The foundation was set and we felt blessed.

My back ached and my fingers were sore,
But I had worked on that historic pour,
Takhat a Khalsa had laid down its roots,
So I staggered home and took off my boots.

I was dirty and tired with a spinning head,
So I skipped the shower and laid on my bed
And closed my eyes, but I didn’t fall asleep,
I fell into a trance, my breathing long and deep.

I felt lighter than my body, lighter than air,
And I began to rise up, leaving it there
On the bed, as I drifted away in the night,
Then I found myself standing back at the site.

The work we had done was still there in the ground,
But from behind my right shoulder I heard a sound.
Of horses hooves and someone calling my name,
A loud, startling sound, which I could not explain. 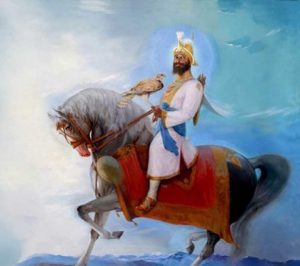 A magnificent warrior then rode into view,
I knew when I saw Him, it was the 10th Guru,
He turned in the saddle, then tilted His head,
“I have come for All My Children!” He said.

With sword held high, He rode away into the night,
With a great rush of wind and a thousand points of light,
I gasped with excitement, my heart raced in my breast,
For the Guru and Neela had ridden away to the West.

And here, now, in Takhat a Khalsa we sit,
Humble and cozy, though the roof leaks a bit,
And I understand now that His words ring true,
For we are the children of the 10th Guru.

SS Gurutej Singh Khalsa is a yogi, warrior, businessman, writer, healer, and teacher. He studied Kundalini Yoga and Sikh Dharma with the Siri Singh Sahib for 35 years as his personal bodyguard in his world travels. Gurutej is a founder of Akal Security, Inc., the largest privately-held security services contractor in the U.S. and largest provider of protective services to the U.S. Government.

Gurutej Singh teaches Kundalini Yoga, the science of meditation, and the teachings of the Sikhs. In 2001, he published Children of the Cusp, a book of poetry about his experiences as a student under the guidance of a spiritual teacher. In 2014, his novel RAJNI was awarded the Gold Seal of Literary Excellence. Gurutej Singh is listed on the Sikh 100 as one of the world’s most influential Sikhs. He lives in Singapore with his wife and son, where he writes, teaches, consults, and is actively involved with the Asian Sikh communities. Click here to purchase a copy of Children of the Cusp