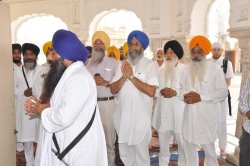 Siri Singh Sahib Bhai Sahib Harbhajan Singh Khalsa Yogiji was born in Gujranwala of old Punjab on August 26, 1929. He was the son of a medical doctor. As a young boy he attended a Catholic convent school. When he was just eight years old he began his yogic training with Sant Hazara Singh who proclaimed him to be a Master of Kundalini Yoga when he was sixteen and a half.

During the turmoil of partition in 1947, at the age of 18, he led his village of 7000 people, near what is Lahore Pakistan today, 325 miles on foot to safety in New Delhi, India. He arrived in New Delhi with only the clothes on his back. 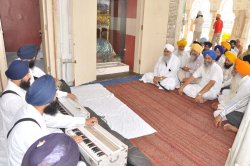 He attended Punjab University and graduated with a degree in Economics. He began Indian government service with India’s Internal Revenue Department. Shortly thereafter he moved to the Customs Service and become head of Customs at Palam International Airport (now known as New Delhi’s Indira Gandhi Airport).

In September of 1968, he left India for Canada to teach yoga at Toronto University, carrying a letter of recommendation from Sir James George, Canadian High Commissioner in New Delhi, who had been his student. After two months in Canada, he flew to Los Angeles for a weekend visit. Arriving in Los Angeles virtually unknown, Yogi Bhajan met a number of young hippies. He recognized that the experience of higher consciousness they were attempting to find through drugs could be achieved by practicing Kundalini Yoga. And so he began to openly teach Kundalini Yoga in the United States and in time – around the world. 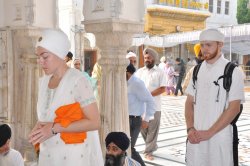 A deeply devoted Sikh, his inspiration and example motivated thousands to embrace the Sikh way of life. Through his personal efforts, Sikh Dharma was officially recognized as a religion in the USA in 1971. In 1971, in acknowledgement of his extraordinary impact of spreading the universal message of Sikhism, the president of the SGPC (governing body of Sikh Temples in India), Sant Charan Singh called him the Siri Singh Sahib, Chief Religious and Administrative Authority for the Western Hemisphere, and he was given the responsibility to create a Sikh Ministry in the West by the Akal Takhat, the Sikh seat of religious authority in Amritsar, India. He was honored with the title Bhai Sahib by the Akal Takhat in 1974.  Harbhajan Singh Khalsa Yogiji left his physical body on October 6, 2004. His passing took place at his home in Espanola, New Mexico surrounded by family and friends.