The Tradition
When the Siri Singh Sahib ~ Yogi Bhajan was born his family was so grateful that they gave the entire village gifts.  From then on gifts of food and clothing were given to the community each year on his birthday, as a way of showing their gratitude for this great soul that had come to their family to serve humanity.  Keeping with the tradition to honor Guru Ram Das, the Siri Singh Sahib ~ Yogi Bhajan would sponsor langar, give sweets and offer new rumallas to the Siri Guru Granth Sahib at the Golden Temple in Amritsar, India.   Honoring this legacy, as his students, we have continued this birthday tradition of making an offering of new rumallas to the Siri Guru Granth Sahib at the Golden Temple each year. Our students at Miri Piri Academy who live near the Golden Temple, are present to make this offering on our behalf.
What are Rumallas?
Rumallas are the beautiful clothing that covers the Siri Guru Granth Sahib in a Gurdwara.  The Golden Temple is famous for the majesty of the Guru’s court and the rumallas are strikingly splendid.
An Opportunity to Share in the Honoring of His Legacy
The sacredness of this tradition offers us an opportunity to participate personally in a Golden Chain connection with our spiritual teacher and his connection to Guru Ram Das.  The total cost is $3000. 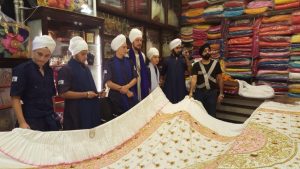 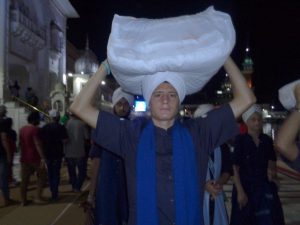 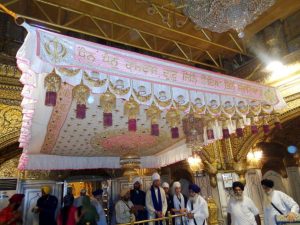