Gender inequality has been always around. Really? Always? Let’s examine the history.

According to the Babylonian Myth of Creation, creation is an act of violence. Violence was important and necessary to restore order over chaos. Marduk, depicted as a white-winged, beautiful, good male god slaughters Tiamat, the abyssal black bad female depicted as the Dragon of Chaos or quite often as a monster.

This 1250 BCE Babylonian creation myth spread as far as all Mesopotamia, Egypt, Greece, Europe, India, and China. It constitutes the formative element of the Patriarchal Age, which is still vigorously vivid in every single structure of the world’s mainstream societies (education, relationships, politics, religion, etc.). Its simple narrative told again and again in our subconscious mind makes us believe that violence saves and that war brings peace.

By making violence necessary, the system is able to delude people into compliance with its guidelines, perpetuating the need for more violence and control over what is by nature unconventional and free.

“This is one of the oldest continuously repeated stories in the world. Having vanquished the original enemy by war and murder, the victor fashions a cosmos from the monster’s corpse. The cosmic order requires the violent suppression of the feminine and is mirrored in the social order by the subjection of women to men and people to ruler.”
-W. Wink

But there have been matrilineal civilizations in the past. Most prosperous and war-free matrilineal societies are now only in ruins and in a few museums in Pakistan and India. They are just a glimpse of a lost time in space. But, you can just imagine the power of those communities where the ruling system was not based on violence or suppression of authenticity and freedom. This highly sophisticated civilization along the Indus Valley (today Pakistan) evolved way before the time of the Great Pyramids and its engineering accomplishments were not replicated until the time of the Great Roman Empire.

Yoga was an integral and essential part of life in those societies in India. A seal depicting a person in Easy Pose (Sukhasana) has been found on merchandise traded abroad. Gold jewelry and gemstones used to adorn both males and females are an amazing example of how those people valued beauty and life.

Their sculptures and arts in general show exquisite artistry and express great appreciation for the natural world. Science was highly advanced by their great nautical nation that exported a large variety of goods to Mesopotamia and other parts of the Middle East and Africa.

What blows my mind about the Indus Valley River matrilineal civilization is its concept of urban cities. Those people did not live in dusty villages, but in a genuine metropolis! Not messy and smelly but perfectly designed big cities with large paved roads, piped water, and sophisticated underground drainage and sewage systems only seen in Europe by the middle of the 18th century with the Industrial Revolution.

“The aim of the matrilineal system is not to have power over others and over nature, but to follow maternal values, i.e. to nurture the natural, social and cultural life based on mutual respect,” says Heidi Goettner-Abendroth, a researcher of modern matriarchal groups.

They differ from other societies in many ways. But worth noting is the conclusion of studies conducted by Jennifer Schwartz of Washington State University, which affirm that in more gender-egalitarian societies, there is much less crime by both women and men. Even the crime gap between women and men is larger, showing that women participate less in crime.

Today’s under-the-radar matrilineal communities such as Mosuo in Tibet, Minangkabau in Indonesia, Akan in Ghana, Bribri in Costa Rica, Garo in India, Nagovisi in New Guinea, and the legendary Amazons in Brazil are good examples of such times when the values of women were not subject to mighty gender power structures.

Most issues of today related to domestic violence, crime, marriage, family structure and sex do seem to be absent in those matrilineal ethnic groups according to some recent studies.

In 3HO communities, women are essentially seen as fundamental to provide, protect and promote life in all spheres, not only domestically. Women have been given a place of extreme importance, and Yogi Bhajan has fostered our leadership role since the moment he placed his feet on the soil of America. As he would say, “I believe a woman is a door to God…Her sway and her grace are keeping the Earth in its own place.”

More so is his devotion to the spirit and psyche of a woman: “Adi Shakti is the Divine Mother, the primal, protective, and generating energy in the cosmos. Let us call on the Divine Mother, the Infinite, and the powerful. Her jantra (symbolic form) is the two swords of God to protect you, the center of your world. These are the two-edged swords of the being, the negative and the positive. This is her being. This is her presence.”

Well, that is a wakeup call! We have to stand up to do the work nobody else can do for us. We are the ones who have the know how to conceive strategies to protect the natural world, to promote prosperity, to stop wars, to create dialogue, to include—teaching kindness and justice to all.

Those tenets seemed to have disappeared along with those original women-based societies. However, now is the time! We are here for a reason and we do hold the consciousness of the divine collective. You and me and us—all men and women need to take a stand because the time for bystanders is long over! 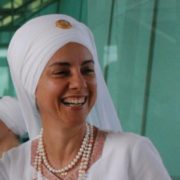 Gurusangat Kaur Khalsa is a KRI Lead Trainer and Sikh Dharma Minister. She has her MD and PhD in Infectology in Belo Horizonte, Brazil. She is the CEO of the Brazilian Association of the Friends of Kundalini Yoga (ABAKY).