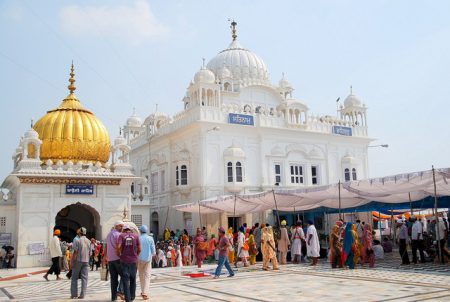 The 2016-2017 Sikh Dharma International Yatra to Patna, India, was wonderfully meaningful.  One personal highlight was doing a special meditation that was initiated by the third Guru, Guru Amar Das, in the 1550s.  He heard a message from the first Guru (Guru Nanak), instructing him to build an underground pool with 84 steps going down into it.  If a person devotedly dips themselves into the pool, then reads the morning prayer Japji on each step, they will be freed from having to reincarnate again.

Last summer, when I heard that Sikh Dharma International was organizing a pilgrimage to India that included the option to do this meditation, I signed up with hardly a second thought.  As I asked around among people who had done it, however, I started getting cold feet.  Their first response was almost always a comment on how cold it is there, especially in the winter.  One insight helped allay my concerns; rather than cringing at every cool draft, and thereby making myself colder by restricting my circulation, I adopted the attitude that it is cold but I am warm.  It was prophetic!  I also equipped myself with cold weather gear used by cold weather wilderness trekkers.  Fortunately, on my destined date at Goindwal, the weather was unseasonably mild, chilly but not seriously cold.

I almost didn’t get to go.  The exercise is quite strenuous.  For fluent readers (including me), reading Japji takes ten minutes.  Reading it 84 times takes 14 hours, not counting walking down the increasing number of stairs, undressing, submerging up to the neck in the pool, drying off, dressing again and walking back up the stairs. Among the group of pilgrims on the yatra, there were only two others who were inspired to do this exercise.  One was not feeling well, and ultimately did not go.  The other was a young man named Simran, who had spent ten years at the school Yogi Bhajan founded in Amritsar.  He was fluent in Punjabi language, culture and customs.  This was doubly fortunate; I would not have felt safe traveling from Amritsar to Goindwal by myself, and he turned out to be an excellent guide. 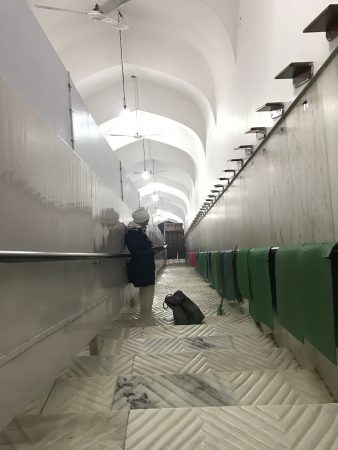 HarSimran Kaur reading Japji Sahib on one of the 84 steps

It was late New Year’s Eve when we set out in a car from our hotel.  For an hour, we wound our way on narrow bumpy roads through dark villages and darker fields, wishing each other a happy 2017 as the clock on the dashboard silently signaled the new year.  He had done the exercise once or twice before; this was a refresher for him.  His familiarity with the place and its ways proved invaluable, as, after we arrived, he steered us to the langar hall for a bowl of dhal (soupy beans) and a chapatti (flat bread), and then to the office for a key to a guest room, where we could store our belongings and take a break when needed.  Standing at the top, on the 84th step, with our Nitnems (prayer books) and towels, we wished each other well and descended down our respective sides of the partition that separated the stairwell into men’s and women’s sides.

For the first couple of hours, we had the place to ourselves.  Our quiet voices, reciting the ancient, timeless words, each in our own rhythm, resounded musically against the hard marble steps and arched ceilings.

Then the Sunday and New Year’s Day pilgrims began to arrive, to start their week and their year with the blessing of the Guru’s holy water.  No one else did all 84 steps during the time that we were there, but many ladies came to dip once in a gesture of their devotion.  As the number of devotees grew, I got a lesson in navigating traffic in that culture.  Adhering to my 20th century Southern US training, to wait my turn and not to crowd people, would have left me gazing in vain at the pool below, while everyone else maneuvered their way around me.  At least for the occasion, I adopted the free-flowing opportunistic style of the locals, moving forward into every available space, trusting that what otherwise seemed like foolishly inefficient gridlock was actually how everyone managed to reach their destination.  I still don’t relish it, but it works. 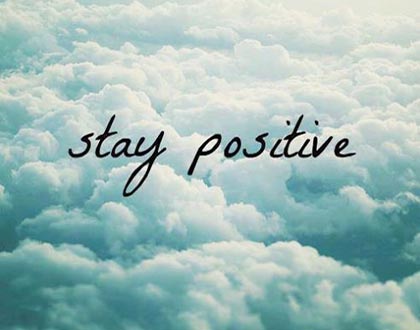 It’s a really long exercise.  On the 30s in terms of step numbers, as the initial elation wore off, I realized that it would be a while before I reached #42, and then I would repeat the previous experience, but with increasing steps to climb down and up.  Three thoughts came to my rescue:

Simran and I shared one key to our guest room. Whenever the one who was not in possession of the key needed a rest or a bathroom break, he or she would listen for the other’s voice, call their name, and the other would pass the key through the gap at the bottom of the partition.  Twice, we paused to have langar together.  We had a time limit:  we had to be back at the hotel in Amritsar to ride to the airport with the group at 7:30 AM on Monday the 2nd for our flight to Patna.  With that pressure and with a novice’s zeal and anxiety, I only laid down to rest once; I set the timer in my phone for 11 minutes, so that I would not sleep away the opportunity; when I awoke, I still had 3 minutes to rest, but I was driven to complete the kriya that had brought me so far.  I clicked the Cancel button, picked up a fresh towel and headed back down to the step where I had left off.

There are no windows in the stairwell down to the pool.  There are three landings at intervals down the stairs, each with drapes visually blocking the views up and down.  Until you reach the uppermost landing, where you can see the daylight or night sky at the opening at the top of the tunnel, you exist in a separate realm, out of sight of the passing of the sun overhead, sunset, nighttime and sunrise.  Oddly, every time I came up for a break during the daytime, I had to make an effort to convince myself that I was in India, and not in central California, where the presence of people from Punjab is almost as ordinary.

My initial burst of energy propelled me through thirteen steps in the first two hours.  After that I settled into a pace of four steps per hour.  Then I reached the last twenty steps.  I had slowed to three steps per hour, because of the greater distance to the pool and my slower reading.  At that pace I would be done on time, but with no time to spare, to rest, to look around and take pictures.  I tried to speed up.  There was no speeding up at that stage, and the extra anxiety was a waste of precious energy.  I remembered Guru Amar Das and my confidence that I was there to complete the meditation.  I also remembered Fauja Singh, the 100-year-old marathon runner, who said, “The first twenty miles are not difficult. As for last six miles, I run while talking to God.” I gave God a brief bow and a smile, and brought my focus back to the moment at hand. 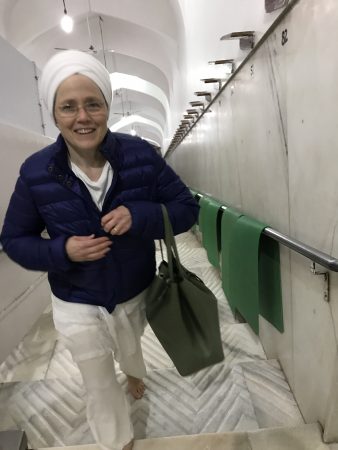 After the 83rd Japji, standing in the pool before my last dip, I paused, looked around, and thought, “This is it.”  I remembered a particularly disheartening thought that I had resigned myself to earlier in December, before this trip.  My negation was answered by a thought blessed by Guru Amar Das, to renounce that giving up and to embrace a self-empowering reality; I agreed to walk the steeper path for that experience.

We started at 1:15 AM on Sunday, January 1.  I finished around 3 AM the next day, about 26 hours later.   It was a bit like doing two days of White Tantric Yoga in a row.  I felt that every cell in my body had been refreshed and recharged.  I am very, very grateful for the experience.  In the future, if I feel the need for deep cleaning and refreshing, I know where to find it.