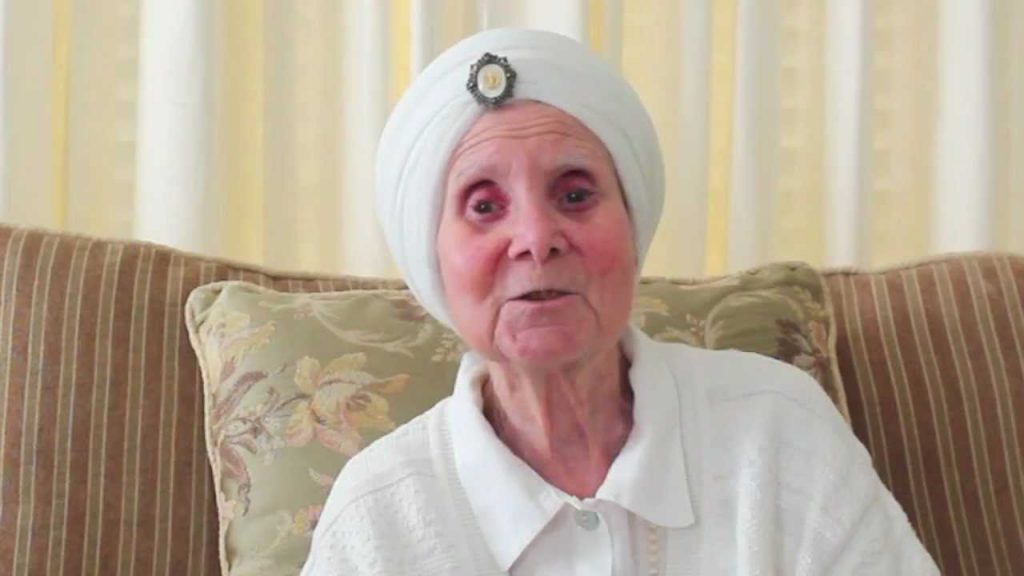 Through the blessing of the Infinite Creator and Guru’s Grace, M.S.S. Shakti Parwha Kaur Khalsa will be celebrating her 90th birthday on Wednesday, June 19, 2019.

She is still at home with her caregivers, comfortable and stable, eyes sparkling as she tells her stories and jokes, and sings her many songs!

To celebrate this milestone of a birthday, we ask that you send your love and prayers in the form of a card for her to read, enjoy and display around her home.

Please send your cards to:

Up until about age 87, Shakti Parwha Kaur was writing her memoirs; stories and memories from her childhood forward. These writings have not yet been published, but we thought you might like to read her own words as she speaks about meeting the Siri Singh Sahib Ji, her own mother, being given the title Divine Mother, and of course Birthdays! Read below, and enjoy.

With much love and many blessings,

The Caring for Shakti team

Excerpts from the Memoirs of Shakti Parwha Kaur Khalsa

“I was born June 19, 1929 at the Asbury Hospital in Minneapolis, Minnesota, (as the great comedian, Danny Kaye, used to say), ‘in order to be near my mother.’ “

“It was my wonderful mother who had the most profound influence on my life. I thought she looked like Claudette Colbert. She actually did – a little bit. I believed she was the most beautiful mother in the world.

It wasn’t until I was almost 40 years old and met my Spiritual Teacher, Yogi Bhajan, that I learned that ‘Mother’ is indeed the first Teacher, and that whatever she says and does and thinks – even when you’re still in the womb stays with you just about forever!”

“As a child I was sick a lot of the time. And I particularly remember that my mother would promise to bring me home crayons or a coloring book, and whatever she promised, she always brought. I never had any doubt that she would keep her word. In our house there was only one sin, and that was to lie. So, no matter what went wrong, so long as we told the truth, my mother would find a way to work out a solution. I thought she knew everything!”

“When Yogi Bhajan met my mother in early 1969, he told me, ‘Now I understand why you are the way you are.’

And when I learned that Sikhs worship ‘truth’ – SAT NAM – Truth is your Identity, I felt right at home with that.”

“Yogi Bhajan’s full name and title is Siri Singh Sahib, Bhai Sahib, Harbhajan Singh Khalsa Yogiji, but when I first met him, he was simply known as ‘the Yogi’ (or by some of the more irreverent flower children, ‘the Yog’.) It was at the East West Cultural Center that I met Yogi Bhajan on Sunday, December 24, 1968, when Dr. Tyberg was the speaker. Dr. Judith Tyberg was the American Sanskrit Professor and founder of the Center. It was customary for us to go out for dinner afterwards and when we were all seated, the Yogi leaned over across the man who was sitting between us, and said, ‘Your son is in trouble, isn’t he. I can help. Come and see me.’ So I went back to the East West Cultural Center the next day; it was Christmas 1968. We sat in Dr. Tyberg’s office and Yogi Bhajan told me the story of his coming to America.”

“Then he told me the story of MY life.”

“He knew I had suffered; married at 18, had a child at 20, divorced at 22, betrayed by a self-proclaimed spiritual teacher to whom I lost my money and my home, and had worked two jobs as a waitress to support myself and my son. Yogi Bhajan told me my time of suffering was over, and that he would make it up to me for the betrayals I had experienced. I thought, ‘Oh yeah, sure.’ (But at least I didn’t say that out loud!) That’s when he also told me, ‘I have not come to get disciples, I’ve come to train teachers. You’ve been a student long enough; you should become a teacher.’ Within two months I was teaching Kundalini Yoga.”

“The first time Yogi Bhajan mentioned the ‘mother’ role was in January of 1969. We were in the kitchen of the East West Cultural Center. He had just made lunch for me and Dr. Judith Tyberg. Yes, he not only cooked for her, but he took out the garbage every day, too. He called her ‘Ma.’ I can see him standing by the stove, with a big spoon in his hand, as he talked about ‘3HO’ and how it was every person’s birthright to be healthy, happy, and holy. I couldn’t argue about that, but I did argue with him about almost everything else in those early days. That he put up with me and all my nonsense, never reacting, never criticizing – at least for the first three years (then the real work started), is living testimony to his amazing patience, tolerance, and above all, divine compassion.”

“A few years later on June 19, 1971, I flew to New Mexico to celebrate my birthday. To mark the occasion, Yogi Bhajan brought the whole Summer Solstice camp, driving 50 miles, to meet me at the airport. One young woman brought her cello along to serenade me. When we arrived at the Solstice site, as I made my way to the stage, rose petals were strewn in my path. Honestly!”

“Of course, in the reality of studying with a true Spiritual Teacher, the next year my birthday was totally ignored. Well, almost totally. I was in L.A. and Yogi Bhajan phoned me about some business situation. When I mentioned it was my birthday, all he said was, ‘Oh, Happy Birthday.’ That was it. I must admit, I liked the rose petal treatment better, but by then I knew the cardinal rules of the spiritual path, i.e. ‘Don’t react – be happy no matter what, it’s all God’s will. Take the bitter with the better and be grateful.’ Well, I just kind of made up this rule just now, but you get the idea. When one is unaffected by the pairs of opposites, that’s when one is really a yogi.”

“Most of my life before I met Yogi Bhajan I spent on an emotional roller coaster. Everything was a big deal. I got upset over the slightest things. A really exhausting way to live. Flash forward and it’s another birthday, June 19, 1989, and I had flown to New Mexico to celebrate my 60th. I went over to greet Yogi Bhajan. He was seated on a white marble bench overlooking the spacious green lawn of the Ranch. He had just finished putting a group of young people through the paces of a strenuous P.E. session. He didn’t say ‘hello,’ he didn’t say ‘Sat Nam,’ he simply proceeded to announce to everyone that it was my birthday, and from now on they should refer to me as ‘Divine Mother.’ “