In celebration of the first Prakash of the Adi Granth Sahib (1604 C.E.), Hardeep Singh Virdee, a former member of the Los Angeles Sangat – now living in Indianapolis – invited M.S.S. Kirtan Singh and jatha to join in the occasion at the Plainfield Gurdwara in the suburbs of Indianapolis.

I arrived on Friday evening and was picked up by Hardeep Singh and Kulbir Singh, two of the event organizers, who brought me straight to the Gurdwara. There were sevadars preparing the Gurdwara for the weekend’s events, aunties in the kitchen preparing fresh langar and children running around and playing. Having been in Indianapolis earlier in the summer for a Khalsa Youth Camp – about an hour across town at another Gurdwara – I saw several children who had been at camp. They were surprised to see me (while I wasn’t sure how many kids from camp I would see) and they excitedly shared their memories of camp with me, asking if I would be teaching any Gatka over the weekend. Kirtan Singh, Sat Kartar Kaur and Gurprasad Kaur arrived late on that night from Los Angeles and stayed near the Gurdwara at a hotel owned by a member of the Sangat.

On Saturday morning – after sadhana at the hotel – we went to the Gurdwara to help set up the Guru’s Darbar (court) for the next day’s event. There was a massive tent erected outside of the Gurdwara building, akin to the Tantric shelter tent at Winter Solstice. Hardeep Singh said that they were expecting to have around 1 to 2 thousand people coming from the surrounding region to join the Sangat. They put out ads in the newspaper, radio and television to spread word of the celebration. It reminds me of Guru Gobind Singh writing invitations to all of the Sangats by hand to gather for Baisakhi 1699 – the founding of the Khalsa. However, it’s interesting that with all of our technology and high-tech communication capabilities, we were only expecting thousands, while Guru Gobind Singh’s handwritten letters attracted hundreds of thousands. Nonetheless, we were in Indianapolis where the total Sangat is probably less than a thousand.

After bowing our heads and having langar for breakfast, we gathered with the Sevadars to begin preparations. The tent outside needed stages built for the Paalkee and for the Kirtan jathas – from scratch. Decorations needed to be made and hung and the whole ground needed to be covered with sheets and rugs. Luckily, we had the many years of experience from Kirtan Singh and the L.A. contingent of putting on the Baisakhi program at the Los Angeles Convention Center and hosting tens of thousands of people (still a tenth of Guru Gobind Singh’s Sangat). It took 20 minutes to envision the whole scene and come up with a plan. We began carrying 2×4 boards to build the stage – close to 50 of them. We were just getting warmed up, but so were the chai and pakoras.

By the time we finished with our tea and snacks, the stages were well under way and there wasn’t much to do but wait. We went back to the hotel to play Kirtan and prepare the Shabds for the next day. We told the Sevadars to call us when they needed our help again – little did we know that they were covered with plenty of Sevadars and help over the course of the day. We were sent with freshly made pizza from the langar hall to hold us over until dinner. We practiced the Shabds for several hours all together and never heard from the Gurdwara. I reluctantly played tabla (having never taken lessons) for one Shabd in preparation for an extra Shabd. Although it didn’t sound great, I enjoyed getting into the rhythm that way. Late in the evening Hardeep Singh returned and reported on the successful preparation of the Darbar.

The main event attracted Sangat from far and wide. Neighboring us at the hotel, a family from Toronto had arrived the night before packed into two minivans. As we approached the Gurdwara,parking lots all around were filled with cars and Sangat was being shuttled down the road to their destination. As we pulled in, there were youth parking sevadars dressed proudly in their orange Dastaars. The tent was filled with Sangat and the sound of Kirtan fill the environment with the Guru’s Baanee. The Palki was raised high and decorated with dazzling decorations, bright rumallas and shining swords. I was astonished at how much had been accomplished in the previous day, nearly from scratch.

I listened to Kirtan, mingled with the Sangat, talked to some of the older kids from Khalsa Camp and ate langar a couple of times (it was a long program). There were many jathas and speakers and Sevadars to be thanked. Kirtan Singh, along with the Gurdwara president, presented Hardeep Singh with a plaque and saropa (a cloth put over the neck or head as a symbol of honor) recognizing his efforts in organizing the event. We were the last jatha to sing Kirtan – we were told that they wanted us to be last so that the Sangat would stay. I wasn’t sure if they meant that the Sangat was looking forward to our Kirtan or if they were going to leave out of disinterest when we started. By the Guru’s Grace – and for the wellbeing of everyone – it was the former. After the Ardaas and Hukam, the Guru was brought in a procession to the Sarai (from Persian for palace – the resting place of the Guru).

It was a blessing to travel and represent Sikh Dharma with Kirtan Singh, Sat Kartar Kaur and Gurprasad Kaur. It was blissful to sing Kirtan with them all in the hotel for hours and in the presence of the Guru. It was a privilege to see some of the kids from camp and meeting some of the great Sevadars. Above of all, it is always the greatest gift to gather in the Sadh Sangat at the feet of the Guru. 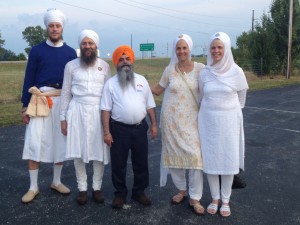