There have been two events, among many, that confirmed without question that it has been my destiny for lifetimes to live as Khalsa. One came the very first day I wore bana in public.

I had always been rather shy, wanting to be a “fly on the wall,” especially in public situations. The last thing my conscious mind wanted was to dress in a way that would call attention to me.

At my first 3HO Summer Solstice in 1977, I practiced wearing a turban in a “safe” environment where hundreds of others were wearing bana. The test came when I returned home to Toronto, and wanted to wear my turban in public, despite my self-consciousness.

I stepped into the Toronto subway car, which was unusually empty for that time of day, except for an elderly couple who happened to sit opposite me. They looked at me and one said, “Oh my dear, you look just like angel!” At that moment there was no question that Guru Ji’s protective and compassionate hand was blessing me on this life-changing journey. 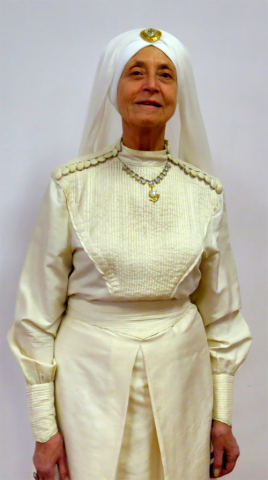 During Baisakhi 1982 Siri Singh Sahib ji was in Toronto for a weekend White Tantric Yoga ® course. During the course, he blessed a marriage for me and insisted that we wed within five weeks.

As I planned my wedding dress, I had a fleeting vision that what I wore on this special day should carry the vibratory frequency of Guru Gobind Singh and at the same time be feminine.

I hastily sketched something that vaguely conveyed my idea—with a kind of breastplate, epaulets and cummerbund—and gave my drawing to my dressmaker. The resulting kurta was magnificent!

Over the years it always felt right to wear this wedding kurta during Baisakhi or Guru Gaddi Day, but at no other times. Interestingly, no one had ever noticed or commented on it being Guru Gobind Singh-like…until Guru Gaddee Day 1997.

That Sunday morning I was playing Gurbani Kirtan in our Gurdwara in Espanola. The Siri Singh Sahib ji was sitting on the other side of the stage, in his usual place. I noticed that he seemed to be scrutinizing me from across the stage—not a familiar experience for me.

He beckoned to one of the Panj Piare standing behind the Guru, and said something to him. Next thing I knew, I was being asked “Did you buy the dress or did you have it made?”  I gave him my answer and he replied back to Siri Singh Sahib ji.

After Anand Sahib and before the Ardas, the Siri Singh Sahib asked me to stand up. He told the sangat that my kurta was exactly like those during the time of Guru Gobind Singh. He honored me with a saropa and $500.00! In his letter to me he wrote “Today I give you this humble acknowledgment of your award of Best Khalsa War Dress.”

The fleeting vision of my wedding kurta back in 1982 was really a gift—a knowing, for my questioning mind, that indeed I was a daughter of Guru Gobind Singh and my destiny was sealed to be Khalsa in this blessed lifetime. Wahe Guru Ji Ka Khalsa! Wahe Guru Ji Ki Fateh!

After 35 years, we finally have a pattern for the kurta, thanks to Padmani Kaur, a most gifted dressmaker. I have the pattern, which I am happy to share with you. For your very own “Best Khalsa War Dress” you can contact Padmani at padmani.chris@gmail.com or call her at  (717) 823-1590. 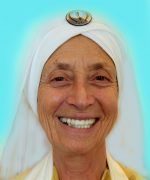 A longtime student of the Siri Singh Sahib, SS Sangeet Kaur Khalsa sings, teaches, composes, and records Gurbani Kirtan. She is an ordained Sikh Dharma Minister and has traveled throughout the US, Canada and Europe, helping students to experience their voices as vehicles for self-healing and healing others through the sacred sound current. Recently ‘retired’ after 22 years as a speech-language pathologist in the New Mexico school system, Sangeet devotes her time to teaching vocal technique, harmonium, and Gurbani Kirtan to individuals and small groups, in person and via Skype. Contact her at sangeet11@khalsa.com.