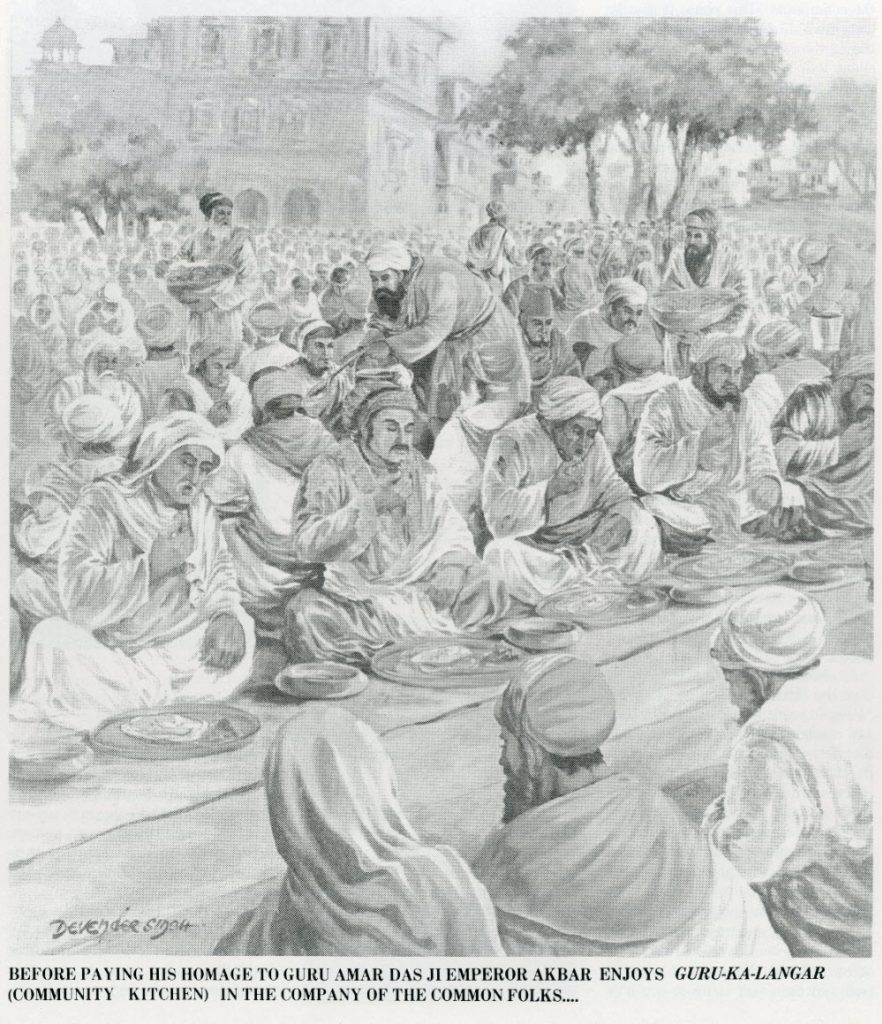 The 3rd Sikh guru, Guru Amar Das ji, proclaimed that no one would be allowed into his presence until that person had eaten in the Guru’s Kitchen, or Guru ka Langar. Of course, it was a wonderful service to make sure that everyone had this basic need for food taken care of before seeing the Guru. But Guru Amar Das also had another goal in mind. When you eat in the Guru ka Langar, everyone sits on the same level, on the floor or ground and everyone eats the same food. This practice ensures that each person coming to see the Guru would be reminded that they were neither above nor below anyone else. ~ Pritpal Singh Khalsa

The article below first appeared in the 1979 10th Anniversary Double Edition of the Beads of Truth.

In this story, excerpted from a 1979 Beads of Truth article, the author shares his experience of visiting the Golden Temple during a 1971 yatra to India and how that inspired him to continue serving langar when he returned home.

“In 1971 many of us were blessed to go with our beloved teacher, Siri Singh Sahib Bhai Sahib Harbhajan Singh Khalsa Yogiji, to mother India. We visited some of the many holy places of India and many gurdwaras representing a very fine heritage in Sikh history. Of all the places we visited, the beautiful Golden Temple, with its divine nectar tank, healing vibrations and sounds of Gurbani Kirtan, is still felt in our hearts and heard in our ears.

I had the blessing of serving in the ‘Free Kitchen’ and looking into the eyes of many who came to be fed. I can still see the people with hands cupped in a gesture of receiving their daily food. I saw how much they appreciated what was being given to them, and I knew that when I returned to America, with the Guru’s grace and the help of Sikh members of our community, we would also establish a ‘Free Kitchen’.

Though the hunger problem is not as extensive as what I had seen in India and other countries I visited, there are definitely many people in this country who do benefit by the opening of a ‘Free Kitchen’.

When I returned home from my trip I discussed my feelings with members of our ashram. We knew it would mean a considerable financial investment. At that time, we had funds we were planning to use for opening a Golden Temple restaurant. After a short discussion, we agreed on feeding the poor before opening up any kind of business for profit. With the aforementioned funds, we acquired a facility in a small house located in a community where we felt we could be of the most service. On May 4, 1972 we served a fine Indian meal of chapatis, curry, and dahl in our first ‘Free Kitchen’.

We were ready by noon, but not for the 250 – 300 people who came needing to be fed. In fact, we got to the point where we had to begin emptying our cupboards until they were bare, in order to provide for everyone. Although our own dinners were sparse that evening, we all felt blessed to have had the opportunity to serve in this way. 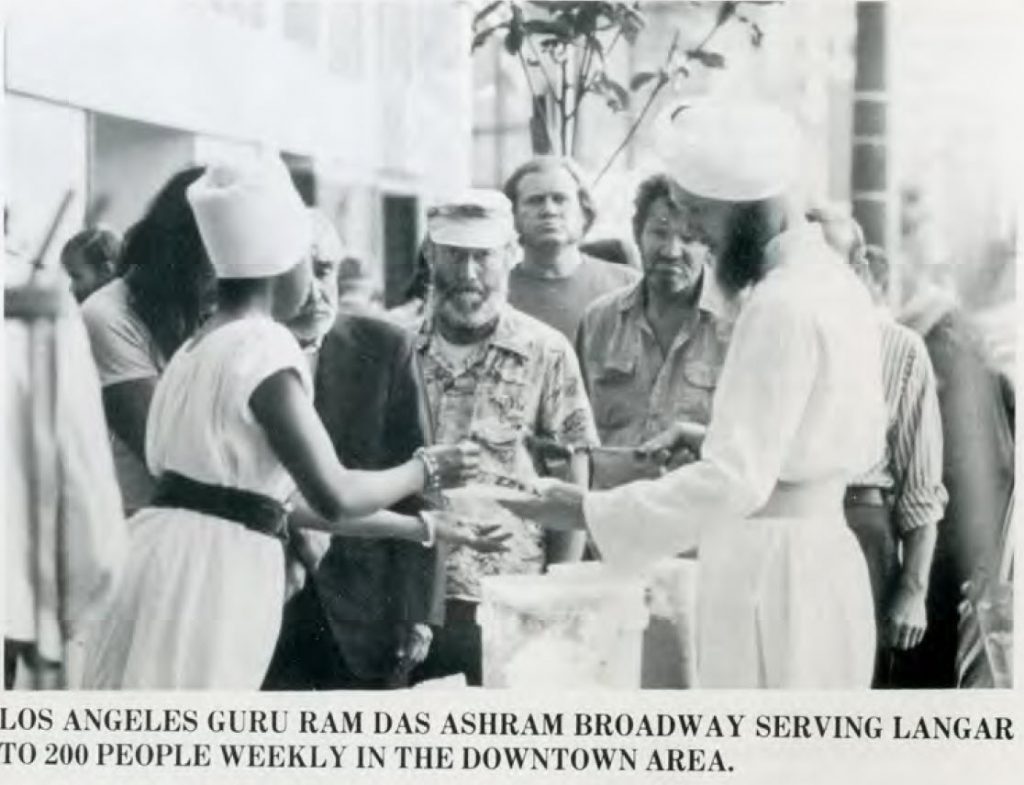 Reflecting over the day’s events we realized the variety of people who we had served in the ‘Free Kitchen’ that day. Some were black, some white, some Mexican, some Indian, some in rags, some in suits; they could have been Hindu, Buddhist, Christian or Jewish. It made no difference. All were sitting together as a family at the Guru’s table.

We remembered how Guru Nanak had fed the poor. I recalled how kings and princes, rich and poor of all castes and religions had sat before Guru Amar Das to eat the Guru’s langar, marking no distinction between any man. Just as the sun shines equally on all, they sat together and shared companionship and brotherhood. So it came to be that we named the free kitchen the ‘Guru Amar Das Free Kitchen’.

The next day when the ‘Guru Amar Das Free Kitchen’ opened, a wonderful thing happened. So many people had heard about and gotten into the spirit of the ‘Free Kitchen’, that many came with food and contributions. A number of them were people I knew had been to the ‘Free Kitchen’ the day before, people with little or no money, coming with food that they had gathered themselves from the community.”

Six years later, people are still being fed at ‘Guru Amar Das Free Kitchen’. If the roof of the ashram would blow away, the walls crumble, or we had only enough food to feed our own, there would still be no hesitation in feeding first any who came to us in need.

We have now grown to the extent that we are receiving a federal government grant for this service and are in the process of establishing another ‘Free Kitchen’ on the south side of Tucson. (At the time of this printing the Government grant has been withdrawn but Dasvandh has been able to give financial assistance.) In the years to come there will hopefully be many ‘Free Kitchens’ in this country.

We are very thankful to all our brothers and sisters, both in the ashram and in the community, who have sacrificed to make the ‘Guru Amar Das Free Kitchen’ a reality. We especially give thanks to our inspiration and guide, Siri Singh Sahib Bhai Sahib Harbhajan Singh Khalsa Yogiji, who opened our eyes and hearts to the needs of others by his perfect example of humility and service. All has been by the grace of God and the blessing of Guru.

Read the Original Article from the 1979 Beads of Truth.