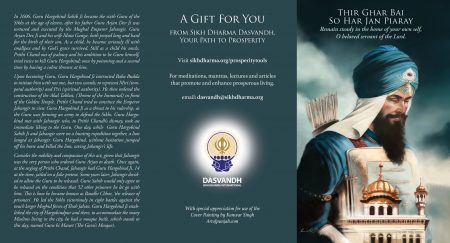 With gratitude for this artwork by Kanwar Singh (artofpunjab.com) 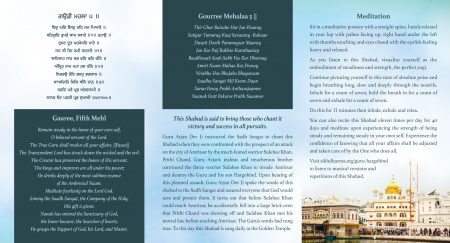 This Shabad is said to bring those who chant it victory and success in all pursuits.

In 1606, Guru Hargobind Sahib Ji became the sixth Guru of the Sikhs at the age of eleven, after his father Guru Arjan Dev Ji was tortured and executed by the Mughal Emperor Jahangir.  Guru Arjan Dev Ji and his wife Mata Ganga, both prayed long and hard for the birth of their son.  As a child, he became seriously ill with smallpox and by God’s grace survived.  Still as a child, his uncle Prithi Chand, out of jealousy and his ambition to be Guru himself, tried twice to kill Guru Hargobind, once by poisoning and a second time by having a cobra thrown at him.

Upon becoming Guru, Guru Hargobind Ji instructed Baba Budda to initiate him with not one, but two swords; to represent Miri (temporal authority) and Piri (spiritual authority).  He then ordered the construction of the Akal Takhat, (Throne of the Immortal) in front of the Golden Temple.  Prithi Chand tried to convince the emperor Jahangir to view Guru Hargobind Ji as a threat to his rulership, as the Guru was forming an army to defend the Sikhs.  Guru Hargobind met with Jahangir who, to Priti Chandh’s dismay, took an immediate liking to the Guru.  One day, while Guru Hargobind Sahib Ji and Jahangir were on a hunting expedition together, a lion lunged at Jahangir.  Guru Hargobind, without hesitation, jumped off his horse and killed the lion, saving Jahangir’s life.

Consider the nobility and compassion of this act, given that Jahangir was the very person who ordered Guru Arjan to death.  Once again, at the urging of Priti Chand, Jahangir had Guru Hargobind Ji, 14 at the time, jailed on a false pretext.  Some years later, Jahangir decided to allow the Guru to be released.  Guru Sahib would only agree to be released on the condition that 52 other prisoners be let go with him.  This is how he became known as Bandhi Chhor, ‘the releaser of prisoners’.  He led the Sikhs victoriously in eight battles against the much larger Moghul forces of Shah Jahan.  Guru Hargobind Ji established the city of Hargobindpur and there, to accommodate the many Muslims living in the city, he had a mosque built, which stands to this day, named Guru ki Maseet (The Guru’s Mosque).

Guru Arjan Dev Ji instructed the Sadh Sangat to chant this Shabad when they were confronted with the prospect of an attack on the city of Amritsar by the much-feared warrior Sulehee Khan.  Prithi Chand, Guru Arjan’s jealous and treacherous brother convinced the fierce warrior Sulahee Khan to invade Amritsar and destroy the Guru and his son Hargobind.  Upon hearing of this planned assault, Guru Arjan Dev Ji spoke the words of this shabad to the Sadh Sangat and assured everyone that God would save and protect them.

It turns out that before Sulahee Khan could reach Amritsar, he accidentally fell into a large brick oven that Prithi Chand was showing off and Sulahee Khan met his mortal fate before reaching Amritsar.  The Guru’s words had rung true.  To this day, this Shabad is sung daily at the Golden Temple.

Sit in a meditative posture with a straight spine, hands relaxed in your lap with palms facing up, right hand under left with the thumbs touching and eyes closed with the eyelids feeling heavy and relaxed.

As you listen to this Shabad, visualize yourself as the embodiment of steadiness and strength, the perfect yogi.

Do this for 11 minutes, then inhale, exhale and relax.

You can also recite this Shabad eleven times per day for 40 days and meditate upon experiencing the strength of being steady and remaining steady in your own self.  Experience the confidence of knowing that all your affairs shall be adjusted and taken care of by the One who does all.

*We would like to offer special appreciation for the artwork of Guru Hargobind used for this altar card by Kanwar Singh from artofpunjab.com

Musical Versions of this Shabad

108 Repetitions of this Shabad with Gurmukhi and English Translation

108 Repetitions of this Shabad in Gurmukhi

*We would like to offer special appreciation for the artwork of Guru Hargobind used for this altar card by Kanwar Singh from artofpunjab.com