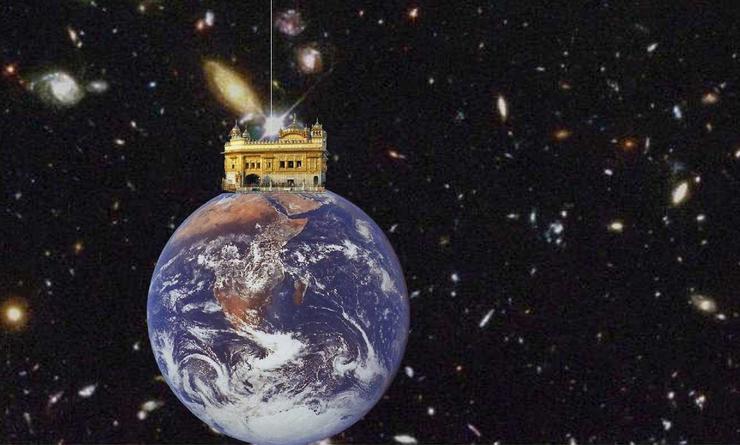 This is a true story about how sometimes something looks like one thing, but it is actually something quite different.

I remember Siri Singh Sahib Ji speaking in Gurdwara about three kinds of stories we should all be telling each other: inspirational stories of our personal experience, stories of our history and stories of duty. This is the first kind of story. It’s a very personal story. This story took place in 1999.

It’s a funny thing, when I first came to Amritsar I was overcome with a desire to not sleep. Those of you who’ve been there may understand, but I just didn’t want to sleep very much, and you know, I didn’t seem to mind it at all. Sometimes I would just put my shawl under my head and lie on the marble of the Parikarma – listening to the kirtan.

The beautiful thing was that each night when we finished the Ishnaan Seva, about 1:30 in the morning, the entire Golden Temple had been cleaned out: all of the rugs removed, all of the brass railings, the flowers, the Palki, all were removed. After the cleaning, the process of setting everything back up begins, and there’s a period of about an hour when there’s no kirtan.  It’s the only time during the entire 24 hours of each day when there’s no kirtan going on at Darbar Sahib.

That first night we finished the seva and I didn’t know what to do with myself, so I walked up one of the little spiral staircases to the roof.  The roof of the Golden Temple is all marble inlayed with designs in colored stones and there’s a little Gurdwara up there on the roof.  It’s the large gold dome you see from a distance. I found a spot about a meter behind the Gurdwara where there was a lotus flower made out of colored stones inlayed into the roof.  This spot is the exact geometrical center of the Golden Temple.  If you were to drop a plumb line vertically down through that lotus flower, that line would go exactly through the center of the marble square on the first floor where the Palki sits when the Guru is in Prakash.

So I sat down on that spot and put that lotus flower right at the base of my spine and I meditated. And in my inner eye I saw that the whole Golden Temple was burning with a blue light – just as we have when we’re doing White Tantric Yoga.  It’s a blue electric aura.  And there was a bright beam of light that went right down through the center of the Golden Temple and up into the universe. And I realized that the earth has two axles.  It has the magnetic axle – the north and south pole – but it has another axle, which is the spiritual axle of the earth. This axle goes right down through the center of the Golden Temple.

In my mind’s eye I saw the earth suspended in space with the Golden Temple at the top and this beam of light coming right out of the top of the Golden Temple, so it looked like this heavenly Christmas ornament hanging in space with this shaft of blue light coming out of the top like a string. And as I extended my awareness out around the Parikarma, I saw each of the Akhand Paths that were going on all around the Parikarma, and there are many of them, each one had a blue light just like the blue light that was coming out of the Golden Temple. And so you could see this big blue light and all these smaller funnels of blue light – like strings going up into the heavens from out of each Siri Guru Granth Sahib as it was being read in each of the Akhand Paths.

As I watched this, I understood something which, to me, was very profound, which is that if you love someone very, very, very much… if you love someone so much that your breath is their breath, and your blood is their blood, and their blood flows in your veins, and your heart beats as one with them… then sometimes you feel moved to give them a gift. And that gift has to be something really wonderful. Especially if you’re going to leave your body, and you want to give a unique gift that profoundly penetrates to the very essence of the one you love.

And I understood that that’s how the Guru loves his Sikhs.  And that the gift he gave may look like a book – but it’s not.  Not at all.  It’s a portal, it’s a Stargate.  It’s an opening into another dimension. And when we open that portal, that blue light is formed through the vortex of the sound current of the recitation of the Gurbani and something very profound takes place.  That connection between heaven and earth is formed and energy pours onto the earth from the heavens through that funnel of blue light.

In our Gurdwara in Espanola, as we do our Akhand Path every week, the same thing happens.  That blue light shines, radiates and penetrates.  And it penetrates not just through this Gurdwara, but through all of our community here.  And everyone in our family here is sustained, protected and blessed by that blue aura which comes from the Guru.

And as I sat there on the roof of the Golden Temple, tears filled my eyes, and I felt so grateful for such a gift from such a Guru who loved me so much.

And then each night – each morning – all the rest of the days that we were in Amritsar, I would go up and sit on that exact spot on the top of the Golden Temple and meditate.  And I felt that I was on top of this wonderful ship that was floating on this ocean covering the face of this planet that was sailing through space suspended on this incredible thread of light. 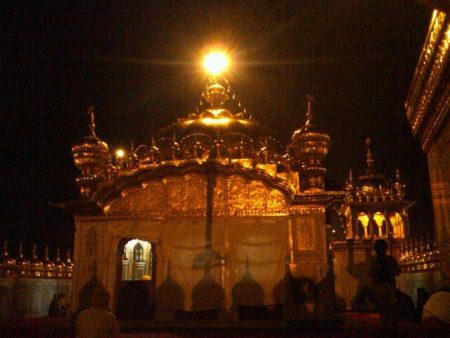