What are we? What are Sikhs and what are Khalsa? We know the story on that day in 1699. We know the accounts of battles and valiant warriors and saintly heroines. These are the people and the potential that we draw inspiration from. Our role models are martyrs, saints, poets, musicians, and householders. But what was the thought and intention that led to the genesis of that vaisakhi day.

I was surfing Facebook, as I do (probably) all to often, and I ran across a brilliant post (I’ll get to it is a second). If you’re interested in what the world around Guru Gobind Singh Ji was like, follow “Nand Lal Diwan-e-Goya”. It discusses not only the poetry of Bhai Nand Lal, a Persian former poet from the court of Aurangzeb, but also the other poets of the Guru’s court. They were from every walk of life and every religion of the day. The page also discusses bits of Sikh history, especially the Guru’s own poetic prowess. For example, did you know that a) Guru Gobind Singh translated the entire Quran from Persian into a Sanskrit dialect called Braj Bhasha? And b) that it was (likely) the first ever translation of the Quran into an Indian language? And c) that he also translated the entire Baghvad Gita from Sanskrit to Braj Bhasha into his own volume called the Govind Gita complete with his own set of commentary? Yeah, cool, I know!

The aforementioned post quotes the writing of Rattan Singh Bhangu. The particular piece of Rattan Singh’s is an account of his explanation to a British officer of the purpose and political realities surrounding Guru Gobind Singh’s choice to create the Khalsa. He initially considered promoting this hill chiefs around Anandpur Sahib as the successors to power in the north, once the Mughals were defeated.

…it occurred to Satguru Guru Gobind Singh’s mind, That the reign of Mughal rulers must be replaced. For this purpose, all the chiefs of the hill states, Must be made to pick up the sword against the Mughals. (15)

Chaupai : But then on a second thought, Guru Gobind Singh thought, That these hill chiefs had never been his followers. Why should he invest them with rare power without any service? Why should he embrace these outsiders at the cost of his own followers? (16) 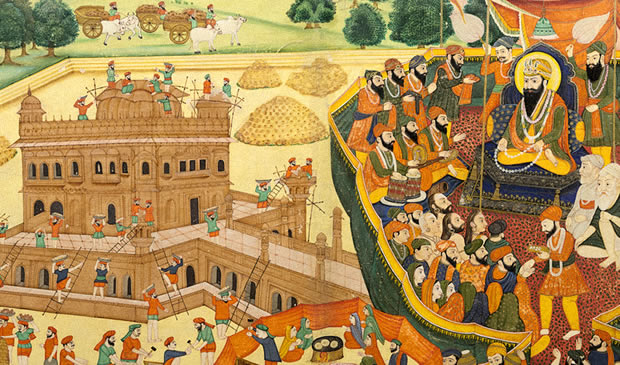 The Sikhs were a group of devotees mystically bound by their devotion to the Guru. Notice the many different type of people present during the construction of Harmandir Sahib in Guru Arjun Dev Ji’s court.
Source: GT 1588 Reflections of the Past

Further deliberating, the Guru decided to foist power upon his humble followers as “The House of Nanak is known for its compassion and generosity, And known as the saviour and protector of the poor.” He offered the seat of temporal power in the north to his Sikhs, but they patently refused. They were afraid as they saw themselves as mystical devotes, unattached from the world and afraid of Mughal might. This troubled him.

Then Sri Guru Gobind Singh felt anguished and thought, That his followers did not wish to achieve anything in life. He had wished to confer power and sovereignty on them, But they were repeatedly refusing to accept this honour. (28)

Chaupai : Sri Guru Gobind Singh, being the knower of all hearts, Had diagnosed the root cause of his Sikh’s psychic malady. Since these Sikhs had been peaceful followers of a Charan Pahul tradition,There was no spark of self-assertion and retaliation in their psyche. (29) 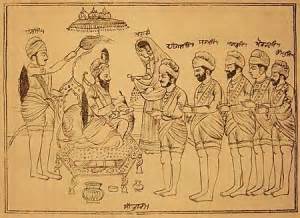 Birth of the Khalsa at Anandpur Vaisakhi 1699.

Dohra : They had been used to wearing a black woolen silken cap as head cover, As they had been indoctrinated to call themselves as servants or slaves, They being grounded in excessive compassion and humility, It would be futile to ask them to pick up swords. (30)

So this was the impetus. The Guru saw a need in the world for upheaval against tyranny and made it his Sikhs’ dharma. After the first Amrit sanchar at Anandpur, thousands of Sikhs took Amrit and took up the sword. I don’t think we can truly imagine what this meant for the psyche of those people. It was transformative in ways I don’t think we all understand.

But what are we now? What does it mean to be Khalsa now? Before the 1700’s, Sikhs were a diffuse group of devotees mystically connected by their Guru. This is still true. But what do we do with the command of Khalsa now? There are endless lists of battles to be fought against oppression. There are vast clouds of ignorance and wrongness in society that are worth illuminating. Our own large, diverse community faces peril. How do we be Khalsa and how does it work today?