From Taiwan to Japan 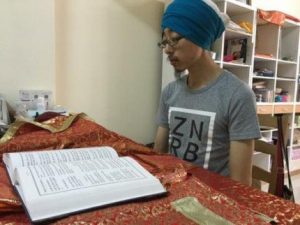 Bachitar Singh of Taiwan taking a hukam from his home

From beginning to end, it was a profoundly joyous journey. I arrived to the island of Taiwan, once called Formosa (Green Island) by the Portuguese, carrying the Guru from the USA, along with an assortment of ramalas, chauris, chindoahs and kirpans. My generous hosts and I traveled throughout the lush, verdant landscape on high speed trains. I set up the Guru in two homes, and showed the families how to do an ardas and take a hukam. From these humble beginnings, surely the relationship with the Guru would continue to grow.

In the tradition of our first Living Guru, classes were held in four main cities starting south from Puli, working our way up through Kaohsiung, Taichung, and ending in Taipei. The Taiwanese students of Kundalini Yoga warmly welcomed me. They greeted me with big smiles and open arms, expressing a deep interest for this opportunity to sing and learn about Shabad Guru. The large Buddhist Temples and brightly colored Taoist Temples demonstrated a cultural respect for meditation, and so the students had a natural reverence for the musical space of the Guru’s Shabad.

From Taipei, I continued on to Tokyo, Japan. In Japan there are a number of Sikh families and Gurdwaras that have been in Kobe and Tokyo for decades. Our Jatha celebrated Guru Nanak’s Gurupurab at the Ikoma Mountain, Gurdwara. Then we presented Kirtan at the Guru Nanak Gurdwara in Kobe where we were greeted with great respect. Our visit marked the first time that the Ardas and the Guru’s hukams were translated into Japanese, as well as in Mandarin in Taiwan. It was remarkable to witness this graceful interweaving of cultures, allowing so many to come together in celebration of the Guru’s Shabad. 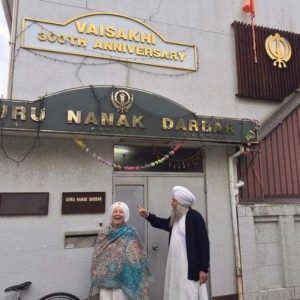