A extraordinary place that is regularly recommended for Sikhs and spiritual seekers to travel to and visit is Hemkunt Sahib in India. It is considered a most sacred location where a great saint and savior of humankind meditated and prepared himself to inspire and lead humanity as well as to fight injustice. Below are details of my journey.

I used to travel to Switzerland, sometimes twice a year for business. Even when my business was in the south, I’d always fly into Zurich in the north, so I could drive south through the Alps. Those majestic mountains sang to me, in a similar way that the Siri Singh Sahib Yogi Bhajan exemplified through his dignity, divinity, grace and words that inspired those who had the good fortune to study with him regularly for over 30 years. He embodied majesty….

I was called to go to Hemkunt Sahib, high in the Himalayas only fairly recently, after being on this sacred path of Kundalini Yoga and Sikh Dharma for 45 years. During these decades, it became clear to me that to master fear; to leave it entirely was important for me to achieve my destiny, as a true son of Guru Gobind Singh Ji. Guru Gobind Singh was the Tenth Master/Founder of the SIkhs, a most exemplary humanitarian and spiritual warrior, who fought tirelessly to preserve honor and justice for all, during a time of severe religious oppression in India. Aspiring to embody the saint-soldier seems to be in my blood, as I’ve begun to understand the sacredness of being a protector of the weak and innocent, in a world where respect, honor, kindness and civility towards one another can be regularly missing.

Training in martial arts for decades (which Yogi Bhajan urged us to do for the first 20 years he taught us) I still find therapeutic and empowering. A daily morning sadhana practice (which Yogi Bhajan also urged for us almost every time we sat with him) also has further helped me to drop much of my fear.

All of this previous training I believe prepared me for the arduous and challenging trek to 15,000 feet in the Himalayas, where in a previous incarnation Guru Gobind Singh (as Rishi Dusht Daman) meditated to be able to fulfill his destiny as a fearless champion for the people. According to the Sri Singh Sahib Yogi Bhajan, Rishi Dushat Daman meditated on this mountain top at Hemkunt Sahib for many years. He mastered all forms of yoga. His presence was so radiant that his aura extended 25 miles. Many seekers would come just to be in that presence which would give them an experience of the Universal Mind. He spoke very little as he was always in Samadhi; a state of being where the sense of the personal self has dissolved into the universal self. Much of his teaching was conveyed in Shunia – Silence. He attained complete union with the divine and broke the cycle of birth and death. After full realization is attained, it is not necessary that one take another birth and out of compassion he did, and reincarnated as Guru Gobind Singh to guide humanity to their truth within. Born fully enlightened, Guru Gobind Singh was 9 years old when he was recognized as the 10th Guru in the lineage of enlightened masters which started with Guru Nanak.

I was in awe and humbled at the presence I felt of the 10th Master, as I bowed and sat in the Gurdwara at Hemkunt Sahib. It all was precious – as was the opportunity to shift in my mind the fear, precariousness and peril of the actual journey. Driving from Rishikesh to Gobindghat (6,000 foot elevation), where the journey on foot, by donkey or helicopter begins, was interesting as at times our SUV was between 10-20 feet close to cliffs that plunged 1000-1,500 feet down. Often there were protective guard rails of various types and at other times there was nothing. Views were breathtaking, both figuratively and literally! Zig-zagging back and forth across hair-pin turns for 10 hours in these amazingly majestic mountains was invigorating as well as tiring and disorienting. Taking long deep breaths, drinking lots of bottled water and not looking down too often seemed to help. After all – we can face our fear and breathe deeply/yogicly through it and maybe drop or leave it – or we can be paralyzed by it!

Then, 19 year-old Charan Atma Singh from Florida and myself, trekked and I took a donkey also (because of my rather severely arthritic knees) to the next step of the journey, Gobind Dham (11,000 foot elevation). It was 10km, from the place where a taxi dropped us off. Views were awe inspiring and the guard rails for walking were there and not there regularly. Walking close to the mountain side felt best and long deep breaths again, which trigger a relaxation response, always served me well. The donkey was another story. They were accompanied by a guide usually and at times one guide would have several donkeys. My donkeys each came with an individual guide – 4 of them over the entire trip. Sometimes the guides were present (mentally that is) and other times not so much. I found it important to exercise my will directing them very specifically, regularly and with a rather stern tone at times (they spoke no English) to walk the donkeys close to the mountain side/inside of the stone and at times cement pathways as well as for them not to push the donkey’s speed too fast. (Donkey riders/renters are at the mercy of the guides presence of mind and the sure-footedness of the donkeys. Two of my donkeys stumbled seriously and one fell landing on my foot, without injury to me thankfully. Donkeys also can get too close to the edge of the pathway, so constantly reminding the guides to stay on the inside of the walkways – allowed me to be more relaxed). The guides seemed very open to this ‘coaching’ as their livelihood depends on the riders safety, comfort and satisfaction with their/their mules performance.

Reaching Gobind Dham was a relief as I knew there was one last stage beyond to reach the summit at Hemkunt. The following day I began walking up towards the summit and soon found myself ready to take a donkey. All good. I felt no less honored and/or honorable to be making the trek on the back of a mule, than if I were ‘under my own steam’ and walking. It felt like the privilege and blessings were in honoring Guru Gobind Singh, and making the journey, however one needed to arrive.

Being at the summit was exhilarating. An exalted location where the Gurdwara (Sikh Temple) stands with the nectar tank to the side and behind, all framed by the most stately Himalayan peaks. Mostly men (as it did not seem there were adequate facilities for women) were dipping in the icy cold nectar tank waters to wash away the karma of lifetimes. I had developed a bit of a cold – so I put my feet in and decided that was going to be enough. Charan Atma did dip fully. I entered the Gurdwara and bowed my head where the recitation of prayers/banis was occurring. It was at that point that I felt an energetic infusion of the 10th Masters blessings and presence – that was profound. I sat and meditated for a bit before bidding farewell to this hallowed space.

Descending back to Gobind Dham, even though downhill, was arduous for my knees and eventually I opted for a mule. Views were splendiferous, and keeping mentally present at all times, was important. Amazing smartphone images were a must everywhere during the trek. Further descent to Gobindghat, also required a mule for me and I was grateful for all of the blessings and opportunities that this sacred journey had provided. If you find your life ruled by more fear than you feel is healthy – consider making this trek. It could be an opportunity of a lifetime!!

Here are photos from Jot Singh’s trip to Hemkunt Sahib: 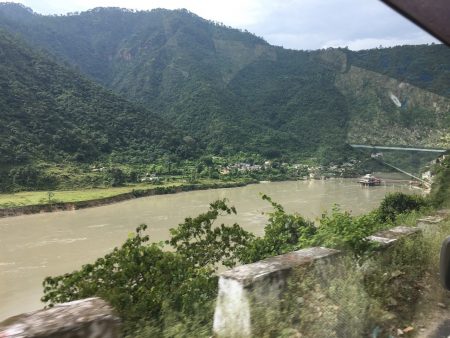 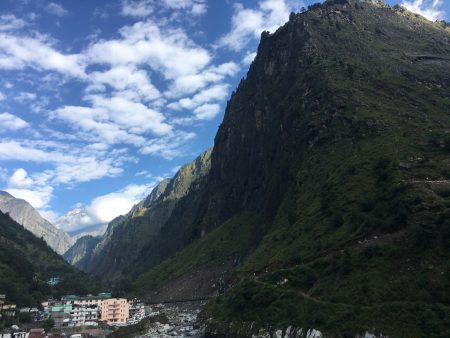 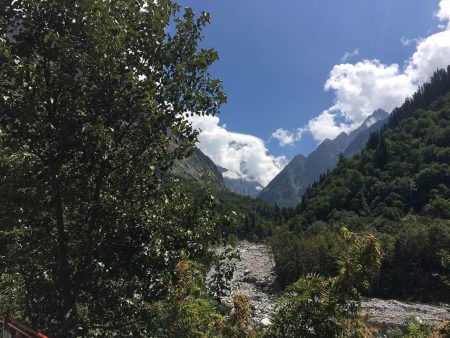 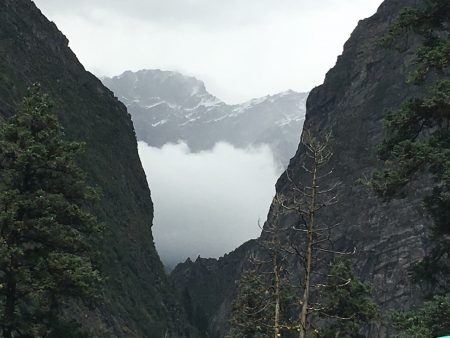 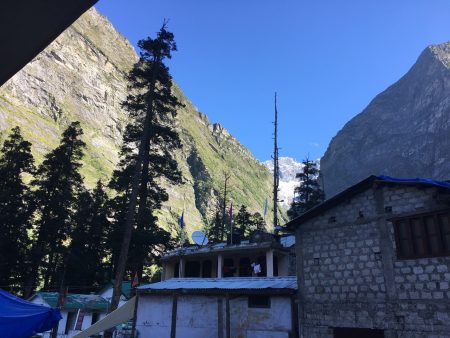 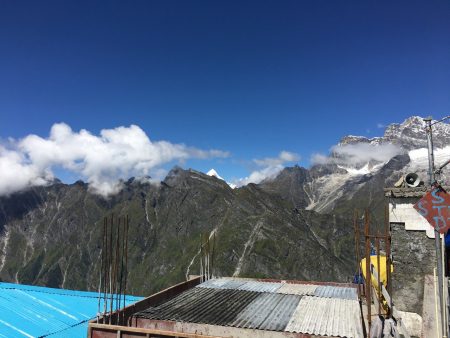 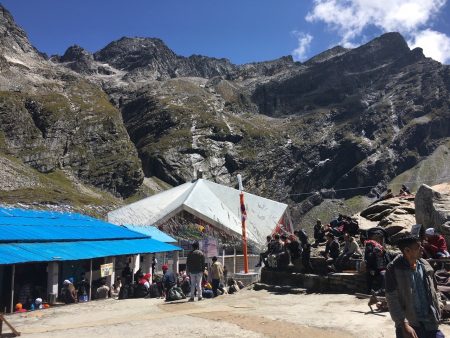 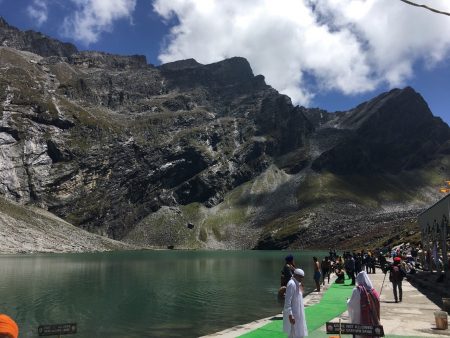 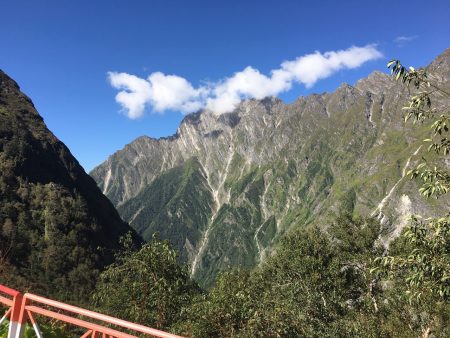 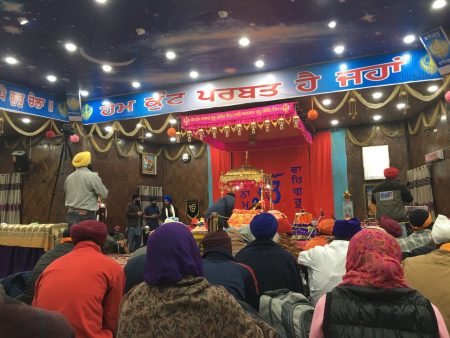 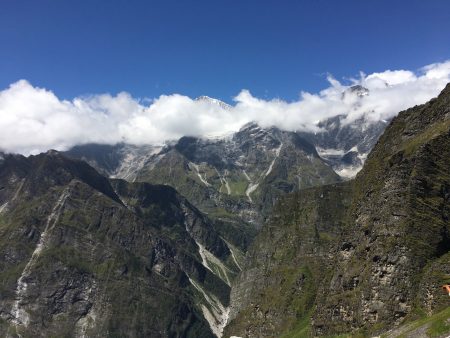 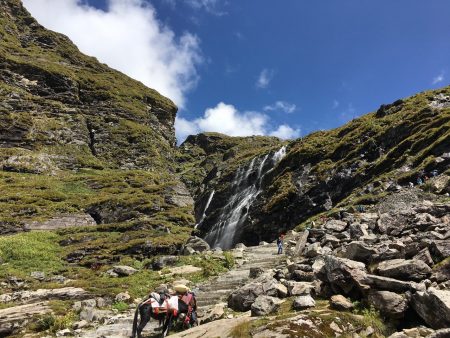 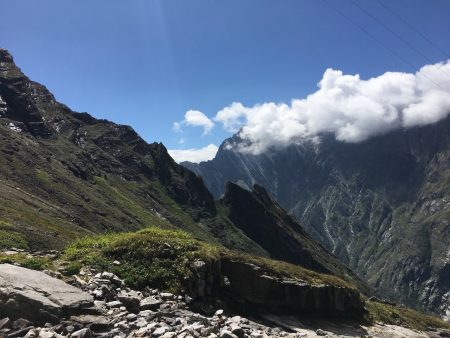