Serving the Divine Within

Known as the “Mother of 3HO” for her role as Yogi Bhajan’s first Kundalini yoga student, MSS Shakti Parwha Kaur Khalsa was ordained in 1973 as a Sikh Dharma Minister with the Ministerial title Mukhia Sardarni Sahiba. She is the author of several books on Kundalini Yoga, Meditation and Sikh Dharma, including “Marriage on the Spiritual Path” and “Heroes, Saints and Yogis: Tales of Self Discovery and the Path to Sikh Dharma.”  This article by MSS Shakti Parwha Kaur appeared in the February 2006 Sikh Dharma Ministry Newsletter.

In most religions, the Minister, Priest or Rabbi conducts a weekly, or daily prayer service, officiates at weddings and funerals and baptisms, and is the person to whom members of the congregation trust for guidance, comfort and inspiration.

When the Siri Singh Sahib established the Sikh Dharma Ministry, in 1971, he knew that we would be called upon to fulfill all those needs and more as we enter into the Aquarian Age. He set up levels, or tiers of ministerial responsibility. Not a hierarchy, on the contrary, he told us to visualize an inverted pyramid. On the very bottom, the lowest position, supporting the entire structure was the Siri Singh Sahib, and he did. He carried us all. And he still does!

His example, his teachings, his subtle body continue to permeate Sikh Dharma. He created the ministerial titles of Mukhia Singh Sahib and Mukhia Sardarni Sahiba to carry the next level of responsibility. Above them are the Singh Sahibs and Sardarni Sahibas whose responsibility is to serve the Sadh Sangat directly. He used to say that the top level, the most important people in this pyramid are the ones who have no titles, and those who may not even be Sikhs. He taught us that we are here to serve all of humanity. 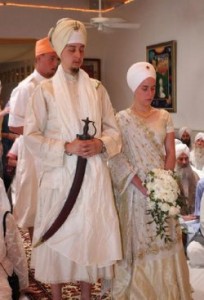 Recently one of the students taking the Kundalini Yoga Teacher Training Course here in Los Angeles at Yoga West asked me if I would consider being the minister at her wedding. She wanted a spiritual ceremony, not a religious one. She said she and her fiance didn’t follow any particular religion. I remembered the Siri Singh Sahib’s quotable quote, “Dutiful is beautiful,” and how he spoke of the meaning of Guru Nanak’s name, “No say no.”  Accessible, available, and ready to answer the call, the Siri Singh Sahib served whenever, wherever he was asked, up until it was physically impossible.

I welcomed the opportunity to share the wisdom of Guru Ram Das’ wedding vows with non-Sikhs. I took the translation of the Lavan from Peace Lagoon and edited it for the occasion. Rather than ask if anyone “objected” to the marriage, I asked if the congregation agreed to the marriage! I explained how important the support of family and friends is to the couple. Considering that the bride had two sets of parents attending (both parents had remarried), I had all four of them come up along with the groom’s original set and stand with the couple for the opening prayer, which I made generic.

From my book Marriage: The Highest Yoga,  I had some wonderful quotes from the Siri Singh Sahib at hand to share. Based on the four rounds of the Lavan: Past, Present, Future, and Infinity, I created four sections of the ceremony. I elaborated on each section, challenging the couple to agree to each pledge. Dropping the past; committing to a daily spiritual practice; realizing that whatever they say or do affects the future, and throughout, knowing that the ultimate goal of marriage and life, is to merge with the Infinite.

Although it all went well, and I was thanked profusely, I have to say, it’s much easier, and feels more complete, to conduct a Sikh wedding. There is nothing to compare with being in a Gurdwara, kirtan playing, with the Guru presiding. However, I felt honored that I was asked, and know that because I didn’t say “no, most of the guests, who probably never met a Sikh before, have now heard the Guru’s teachings about the sanctity of marriage – an understanding that is surely needed in today’s world of casual relationships, multiple marriages and divorces. How blessed we are as Ministers to share this wisdom. 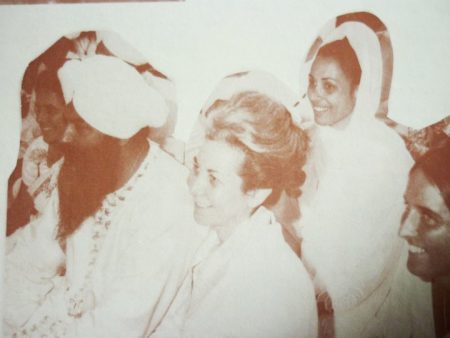 Basically, ministering is serving. When Bhai Kanaiyah brought water to the wounded enemy soldiers on the battlefield, he was ministering unto them. He saw the God in all, as the Siri Singh Sahib did. This is not always easy for most of us, especially when the behavior or words of another person are unkind, rude, or obnoxious.

That’s why I have always loved the story of King Janaka who, upon visiting his barnyard, decided to take a vacation from his duties as King. Having the yogic power to transform himself into another life form, he mischievously became a pig, curly tail and all. He really enjoyed rolling around in the moist cool mud, got very well acquainted with a lovely lady pig. Sure enough, they had piglets, and he was having a great time playing with his pig family.

After about a month of this, his vizier came and implored him to return to his proper place as Ruler of the kingdom. Janaka just said, “Oink.” Finally in desperation, the court surgeon was summoned, and with an apology and a swift stroke of his knife, he slit open the pig body, and out jumped King Janaka, laughing at their dismay. I’ve always tried to remember the moral of the story: inside everyone, no matter what appears on the surface, there dwells a regal, divine being, and that is whom we serve as Ministers of Sikh Dharma.