Bringing the technology of Kundalini Yoga to the African continent was always an important focus for the Siri Singh Sahib (Yogi Bhajan).  Much like he sent people to Europe, South America, and Asia to plant seeds of truth and wisdom, he sent SS Pritam Hari Kaur to South Africa three decades ago. Today, despite some cultural and religious resistance, more indigenous people recognize the benefits of Kundalini Yoga as a way to better manage their growing stress levels and health issues. The process is slow, but if we continue to nurture it, we will have many beautiful teachers sharing this technology in their indigenous languages in villages throughout that great continent.

My focus on Africa began during a personal journey in 1969-1970, just before I encountered Yogi Bhajan and Kundalini Yoga. I went to Africa in search of my way to worship God; but after a year of trekking through four countries and numerous villages, I realized what I was looking for was not there. I left Africa feeling a deep sense of gratitude to the culture, the people, the land itself and the huge personal changes that took place in me. I vowed then to return one day, bringing something meaningful to show my appreciation.

In 2003, I brought 23 Black yoga teachers to Ghana. We toured for three weeks, taught yoga in several cities and villages, embraced our heritage and discovered that there were many who wanted to learn more about Kundalini Yoga. So I promised to come back and conduct Teacher Training, which I did in 2005. The video: “A Thousand Miles” tells that story.

Since then I have conducted six Level 1 KRI Teacher Trainings in Ghana, Togo and Burundi. I initially traveled two or three times a year for four or five weeks at a time to train and help bolster the Kundalini Yoga activities and uplift the fledgling yoga communities. It hasn’t been easy but, together with the Ghanaian teachers, we organized the first Kundalini Yoga Festival in West Africa in 2007.  I brought 27 yoga teachers and enthusiasts from the U.S. to tour Ghana and participate in the Festival. In 2011 the second Festival was held in Togo, with people attending from far-off places such as Austria, Mexico, Canada, Brazil, U.S. and Germany. In 2013, Togo held the third Kundalini Yoga Festival, and I have just returned from the 2015 Yoga Festival in Togo. 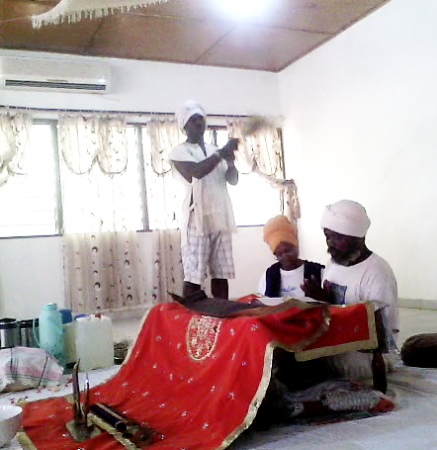 The 3HO Togo community is the largest and strongest Kundalini Yoga community in the region.  They started about 30 years ago with Siri Gian Singh, followed by various individuals who lived there for a while, teaching what they knew and moving on. When I arrived in 2005, the students had a humble yoga center and a unique conglomeration of Kundalini Yoga practices. I’ve been able to correct their yogic techniques and have shared with them the Sikh Gurdwara protocol.  We moved the Siri Guru Granth Sahib (Sikh scriptures) from the entryway of the yoga room into a designated Gurdwara space.

I gave them my harmonium and an electronic player that broadcasts the Akhand Path (unbroken reading of the scriptures) from the Golden Temple in Amritsar, India. I have brought ramalas (altar cloths for the Guru) given by Sikh Dharma International Ministry, Bibiji and others and done whatever I can to support their spiritual growth and understanding of the Sikh technology.

They need kangas for the Guru, tablas, karas of all sizes and most of all, a French translation of the Siri Guru Granth Sahib.  Right now they have one of an eight-volume set from which only one person feels comfortable enough to take a hukum (sacred reading) and translate the English to French.

During my most recent trip to the Togo Festival, I spoke to a dozen KRI-Certified Kundalini Yoga teachers who were interested in becoming Sikh Dharma Ministers. Out of that group I think probably five are actually ready to take that step. Wahe Guru!

For more information or to donate to this program: African Kundalini Yoga Festival 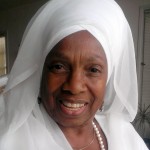