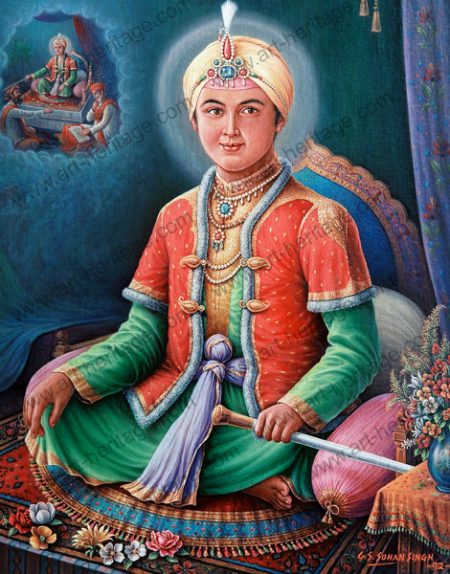 This article was originally published in the Spring 2015 SDI Ministry Newsletter. It was written by S.S. Krishna Singh (New Mexico).

The Ardas admonishes us to meditate on Guru Harkrishan and it promises us that if we do so “all sickness and sufferings will depart.” From a Raj Yoga perspective, we can consider that Guru Harkrishan was the Eighth Guru, and intrinsically related to the eighth subtle body, which is the Pranic Body. Prana is Life Force, and ultimately all healing and well-being are derived from Prana.

We are reminded of the extremely young age of five years at which Guru Harkrishan became Guru. There was considerable skepticism and doubt that a child of such a young age would be capable of fulfilling the mission of being Guru.

It is remarkable that Guru Harkrishan fulfilled and completed his mission within three years by the time he was eight years old. But isn’t it remarkable that children are really much closer to the pure nature of prana than adults, and infants most of all? After all, the aging process is largely caused by stress and the effects of toxicity, apana, and diseases. Children seem to be naturally more “pranically endowed” and initially healthier than most adults.

In 1989, I encountered one of the most simple and powerful pranic teachings of Siri Singh Sahib, Yogi Bhajan. It was published on a VHS tape of classes that he taught to our children who were in transition from the school in Mussoorie to the new school in Dehradun. The children spent the month of January in Espanola before leaving for Dehradun, and the Siri Singh Sahib taught many classes for them while they were here. A tape of one of these classes was loaned to me. I watched it and immediately ordered a copy from Siri Ved Singh.

Within this class from January 18, 1989,  Siri Singh Sahib taught a Pranayam that became literally life-changing for me. He called it the Shiv Sadhana Kriya, and stated that this sacred kriya has the power to “kill death.”

He shared that Shiv Sadhana Kriya had been his own personal and primary pranic breathing practice. He also shared that within the personal emotional shock that he experienced when the Golden Temple and Akal Takht were attacked in 1984, for some reason he stopped this practice. And finally he stated that all of the health problems that started for him at that time, leading to his open heart surgery a few years later, were directly related to the fact that his regular practice of Shiv Sadhana Kriya had stopped in 1984.

Uniting with the Beloved

In 1989, I was going through a marriage separation that ended in divorce. In that extremely challenging personal transition, I had moved from Espanola to Phoenix, and initially found only part-time consulting work with a computer company there. I had a lot of time and it seemed crucial that I work intensively on rebuilding my own life and psyche from the very foundations, on up.

I developed a daily practice of meditating on Shabd Hazare, because through this Shabd one can discover and unite with the Sacred Beloved within oneself. And at the same time that I was listening to and chanting this Shabd, I was also breathing powerfully in the manner of Shiv Sadhana Kriya. Because I had the time, I would typically engage in this meditation for somewhere between 8 and 12 hours a day, each day, for about six months. Wow! This practice changed everything for me.

In 2013, I wanted to document the practice of Shiv Sadhana Kriya in order to incorporate it into my teaching and ministerial work with others. Since I knew the recording existed somewhere, I went to Siri Ved Singh and found the DVD from that class. I got a copy and, behold, the teaching was there.  I have posted a brief clip of the Shiv Sadhana Kriya on a teaching website I recently created: