In mid-January, a few of us were in California for some meetings and on the Monday evening after our meetings were completed, we joined the Share a Meal team to serve food to the homeless on Skid Row in LA.

Many of us do not have a reference point to how awful it is to actually “live on the street”.  Sure, we might pass a homeless person on the street occasionally—maybe they are asking for some money or food; maybe they are sitting quietly and barely noticed in their suffering.

Maybe we give them something, maybe we don’t, but we carry on with our lives and often times don’t give them any further thought…. Until we happen to see them again the next time. 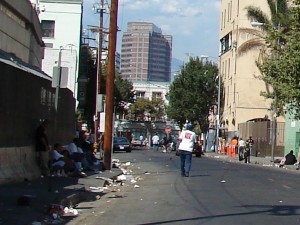 The folks at Share a Meal go right to the heart of where large groups of these homeless people actually live.  They are extremely dedicated sevadars from all walks of life who meet every week to prepare and serve food to the people who need it most around the city of Los Angeles.  Founded by Ravi Singh and his wife, Jackie, the core Share a Meal team is joined each week by people who just show up to help out when they can. (click here to see their schedule and “Register to Volunteer”). That’s what we did on the Monday night we were in town and words cannot describe our experience…..

We (Guru Amrit Singh, Viriam Singh and OngKar Kaur) showed up at the appointed time at the Share a Meal truck which is parked just a couple of blocks over from where Skid Row starts.  [Skid Row is a roughly 10 square block radius in downtown Los Angeles which “contains one of the largest stable populations (between 3,000 and 6,000) of homeless people in the United States”] –Wikipedia 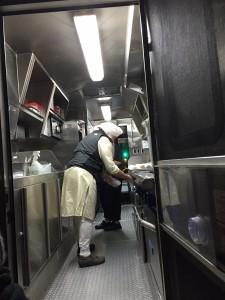 Viriam Singh helping out on the truck

We spent about an hour preparing burritos in the Share a Meal truck.  The food, rice and dhal topped with fresh onions and cilantro and wrapped in a large tortilla, was lovingly prepared and smelled delicious.  After assembling 200 burritos, some of us filled up large insulated shoulder bags with as many burritos as we could carry, while others filled backpacks with bottles of water.  We then headed out from the truck just a block or two away where we started to find homeless people living on the streets.  The truck followed us, so that we could replenish our bags as they were depleted.

It was between 8 and 9 pm and was dark and many people were already asleep.  We walked together in a group, rousing people by letting them know that we had burritos to eat and water to drink.  Most woke from their light slumber and gratefully took a burrito and a bottle of water—they were not only hungry, but extremely thirsty and grateful for both the food and water.  The burritos were still warm and many commented on and appreciated that.  Tonight, a few were lucky since one of the volunteers had brought 2 boxes of soft, warm blankets.  These were soon gone, having been gratefully received. 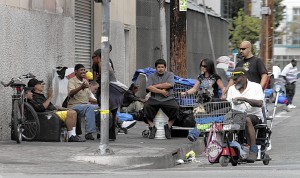 A day in the life of people living on the streets

As we walk down the streets handing out these much needed supplies, the plight of these people was shocking.  If they are lucky, they have a little tent on the sidewalk, but many live either in large cardboard boxes held together with shoelaces or simply sleep on top of cardboard, while the “unlucky ones” don’t have anything to lay on and just lie directly on the cold, hard pavement.

The streets are dirty; trash is everywhere; there are no toilet facilities and no showers; the stench of urine permeates the air; rats and roaches abound; drug paraphernalia can be found.

While none of us has an answer of how to solve the strife of these people, the dedication of the small group of Share a Meal sevadars at least provides some amount of relief to the battle of life that these folks fight daily. Please visit their website to make a donation or volunteer for seva. 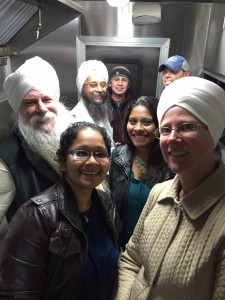 The volunteers on the truck after serving

Thank you to Share a Meal for your dedication to bring food to these souls week after week.  We are grateful and so are they.  While it’s a small drop in the bucket of what they need, you provide a beacon of hope.  Keep up and Vand Chhako, dear friends!

(Punjabi: ਵੰਡ ਛਕੋ) is one of the three main pillars of the teachings of Guru Nanak, the founder of the Sikhism. (The other two pillars are Naam Japo and Kirat Karo) Vand Chhako means to share what you have and to consume it together as a community. This could be wealth, food. etc. The term is also used to mean to share ones wealth with others in the community, to give to charity, to distribute in Langar and to generally help others in the community who need help. A Sikh is expected to contribute at least 10% of their wealth/income to the needy people of the world or to a worthy cause.

Visit Sikh Dharma International’s Sikhs Feed People Facebook page to see how others are practicing this teaching to serve others.