The Guru guides my hand. I decided long ago that society’s view of the Artist would not work for me; eccentric, flighty, unreliable, hopefully not but possibly starving. Not me, not in this life. The Artist is in the fiber of the being, unavoidable. It is a perception, the way you see and understand and process information. I was awarded first place in the Archdiocese of Boston Art Fair when I was a five-year-old first grader, but peer approval in the American fifties and early sixties had more to do with athletic prowess than sensitivity. Unlike sports, art would stay in the periphery of my life for many years.

Fast forward to the Ranch living room in the late 80’s and sitting with the Siri Singh Sahib while he was talking about cottage industries and a new bronze piece he had bought at the Santa Fe Flea Market. As the afternoon wore on, I stared at this bronze and had the realization that I knew nothing about bronze sculpting yet knew that if I had created that piece it would be better than what was on the table. The seed was planted.

Here was my dilemma, I had a very negative view of the artistic process. I had seen art all over Europe and America; some inspiring and some that was completely depressing. You get in a foul, dark mood and paint it on a canvas. Thanks for sharing. I realized that art needed to be inspiring or its purpose was dubious at best. I realized that the only filter of the dark human spirit was the Guru and resolved to work on art only while Gurbani Kirtan was playing. Over the years, I would decide which element I was trying to portray and find the Shabd that best expressed that emotion before I would start and I would play it continuously while I worked on the piece. By Guru’s Grace, I have sculpted the Ten Gurus, several other bronze pieces and painted over a 100 oils on canvas with this process.

The latest piece I am working on is a sculpture of the Siri Singh Sahib ji and with over 400 hours of Dhan Dhan Ram Das Guru, it is near completion. This came as an idea from the Khalsa Council to celebrate the 10th Anniversary of the Siri Singh Sahib’s passing. It was suggested that it be a full size bronze statue, monumental in height at 10 feet tall. There is a place designated at the Ranch for it to be placed. The foundry costs will be significant. The Guru guided my hands through this process, now it is in His hands.
Wahe Guru Ji Ka Khalsa, Wahe Guru Ji Ki Fateh! 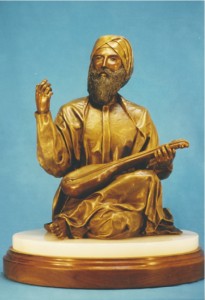 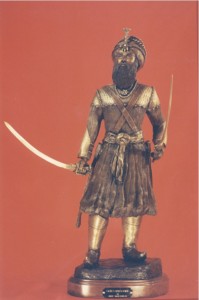 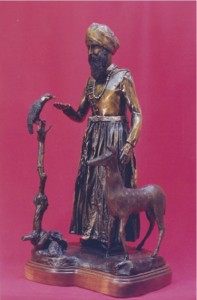 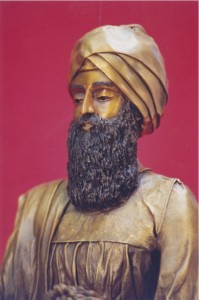 If you know someone you would like to be featured in the Sikh Artist Corner, please contact Seva Kaur Khalsa at sevakaur@sikhdharma.org