Leave the center of Paris on the number 5 metro towards the station Bobigny Pablo Picaso and you might notice something. The elegance of 19th century apartments with little green planters on the balconies and austere slate roofs give way to monochrome apartment buildings stark against the gray sky. You are now in the banlieus of Paris. The word roughly translates to suburbs, but in France the word carries the same connotation that “the inner city” might carry in America: low income, high crime rate, and an array of social ills.

I could not give you an academic assessment of the state of the banlieu of Paris; that is for your own research. But I can give you a purely qualitative assessment of my own upon exiting the metro one gray evening last week. I would not take it as some sort of truism or veritable assessment of the place.Upon stepping out of the metro, you immediately recognize the poverty of the place. There are no cafes attended by trendy Parisians, no quaint gardens, no historical sites. There are massive bus stands and seemingly neglected infrastructure. Trash blew through the streets. Traffic moved out of synch as you might see in a developing country: Errantly parked cars, jay walking, and lots of horns beeping. To be honest, I was not at ease. I felt that everyone stared in Har Rai’s direction and mine and that we were outsiders to the whole. Through the fray walked a tall Sikh in a pale blue kurta, black dastaar, and a wavy black beard. His eyes looked like they’d seen a lot. He greeted us with a curt, yet warm handshake and “waheguru ji ka Khalsa, waheguru ji ki fateh”.

We’d met our host, Jaspreet Singh, the day before 70 kilometers away in a small town called Melun, near where my maternal family lives. Upon approaching the cash register at a local supermarket, we saw a tall Sikh paying for his groceries. We immediately greeted each other with a fateh and began to speak in Punjabi. Luckily, Jaspreet spoke English, because my Punjabi was quickly exhausted. He invited us to join him at the gurdwaras in Paris for evening Simran, which we gladly accepted. Now we’d finally found our way to the outskirts of Paris where the humble gurdwara resides and to Jaspreet’s car as he drove us to meet our Guru and sangat.

Our conversation on the way was intriguing if melancholic. Sikhs are shut out of the status quo. Their children cannot wear turbans to public school and a Sikh employed by a public sector job may not wear his or her turban to work. Sikhs are also shunned in private enterprises because of their outward appearance, especially, by Jaspreet’s summation, since the September 11th terrorist attacks.

You see, in France, secularism is strongly upheld in all things public sector, including schools. Due to a once tyrannical connection between the state and the Catholic church, strict separation of the two is now enforced. The French are very weary of religion as it once contributed to upholding the very tyrannical forces of class and monarchy that their revolution overthrew in the 18th and 19th centuries.

The most talked about and most visible (or invisible) representation of secularism in France is what is commonly called the “head scarf law”. The law, very basically, states that in the public lieu, one may not display overt religious articles. This means crosses for Catholics, hijabs for Muslims, and turbans for Sikhs, etc. The law partly draws from the problems faced in public schools where the Palestinian-Israeli conflict found itself manifesting in the classroom. The law assumes that should religious articles not be displayed, it avoids the religious strife and differences that could arise from religious dispute. It is, by its supporters, seen as an equalizer that puts everyone in the same human boat.

This article is not meant to actually debate the validity to the law; there are far more informed people than I on both sides of this discussion whose comments you can read. I will say that I see dogma, corruption, and destructive fanaticism as a human problem that can be found in both secular and religious bodies. I will also say that, usually, when you don’t let people “be themselves” it tends to have negative, unintended consequences. Also, where do you stop telling people how to live in order to get their piece of the pie?

Another problem is the French, and Occidental, fear of Islam. Since 9/11 and other ensuing attacks in England and Spain, Muslims have been a sniping target for fear mongers in Europe. People buy it. It is like in the United States: every time you hear about Muslims on television, it’s associated with global terrorism. Thus, Islam is equally feared in France.

Sikhs, like in the States, get erroneously lumped in with the already erroneous fear of Muslims. Thus, Sikhs, like Muslims in France, (who have it really bad in a lot of ways) are shut out of “the system” unless they do away with all of their external spiritual identity and assimilate. That poses a difficult set of circumstances for Sikhs not willing to dispense with their unique and deeply rooted identity.

But Jaspreet, and much of the sangat, short hair or long, were in generally good spirits. They knew they had hard work ahead of them and they expressed hope that their children, who speak fluent French, would be able to work on these issues in the future. Aside from protests, the community (only 30,000 in France) do not have the time, energy, or established resources and education to mount a effort to reach out to the French mind to tell them their story. Regardless of all of the pain, obstacles, and frustration, all of these Sikhs bore smiles on their faces and expressed their desire to stay in Cher di Kalaa, ever rising spirit.

My most joyful moment came when I asked about the children. There were not many at the gurdwara that night and I suspected that it may not be well visited by the younger generation. One of the sevadars, Simranjeet Singh who was from Jammu and Kashmir, assured me that there were many children that came regularly.

Right after he said that, I heard a little voice, in perfect French, ask me my name. I turned to see a little Sikh boy, with his hair in a joora covered with a keski standing before me. His name was Sukhdeep Singh. He spoke fluent French, Punjabi, and Hindi with a perfect accent in each. He was intelligent, lively, and hilarious. He was eight. I had a spiritual experience as I explained to him, in French (my mother tongue), the meaning of his Gurumukhi name: the lion of peaceful light. 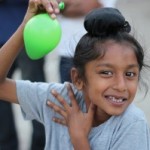