“You are lotus-eyed, with sweet speech, exalted and embellished with millions of companions.

Mother Yashoda invited You as Krishna to eat the sweet rice.”

So sings Nall Bhatt (Bard) on ang 1402 of Guru Granth Sahib. The bani appears shortly after another quickly recognizable bani: Kundalini Surjhee. Nall Bhatt, one of the many bards whose work appears in the Guru, sings these poems. Both poems are part of the swa-yeh praising Guru Ram Das. I thought of this particular poem last Friday during the holiday of Janamashti: the birth of Sri Krishna. The reason it came to mind lies in Nall Bhatt’s use of the image and Krishna in praising Guru Ram Das as an incarnation of the Infinite One.

Janamashti is an important holiday in India. People flock to mandirs to pay homage to Krishna and other deities. Unique to Janamashti is the ritual of rocking a symbolic cradle holding an image of Krishna. Worshippers fast and stay up until midnight when they sing devotional songs and exchange gifts. Midnight is thought to be the time when Krishna was born. 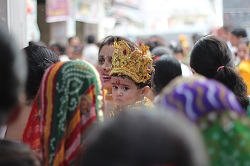 One of my MPA colleagues James and I accompanied Pooja, another colleague, to witness the festivities on that most important day. We met Pooja around six in the evening at the Durgiana Mandir not far from the Harimandir Sahib. The feel of the place was instantly palpable: blaring kirtan, colors abound, little children dressed in yellow robes like baby Krishnas, and throngs of pilgrims. Spiritually, the Durgiana Mandir is the cacophonous explosiveness of the universe to the Harimandirs quiet unity. Another thing is that it is an architectural copy of the Harimandir Sahib: a gilded temple in the center of a pool that is surrounded by a marble walkway.

I have to admit that I felt completely out of my element. Though I have visited India many times and for long stretches, I have remained in Sikh enclaves. I had never really walked around a mandir, chock full of idols of important deities for the adoration of pilgrims. We walked around the parkarma at a slow pace. We took in the scene and visited shrines.

I found myself in a minor inner dilemma: how do I interact with the shrines and idols that my fellow visitors each took the time to adore and meditate on? I do not value or worship those objects as divine or magical, but I do respect the place as a place of worship where pilgrims visit for a multitude of reasons and purposes. I watched as people bowed to the statues of Shiva and Krishna and folded their hand to pray with eyes shut. 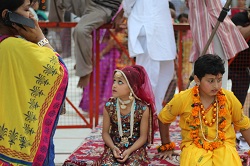 As Krishna, You wear yellow robes, with teeth like jasmine flowers; You dwell with Your lovers, with Your mala around Your neck, and You joyfully adorn Your head with the crow of peacock feathers.

You have no advisors; You are so very patient; You are the Upholder of the Dharma, unseen and unfathomable. You have staged the play of the Universe with joy and delight.

This line put things in context to me. Here is Nall Bhatt praising the Infinite, which he sees in Guru Ram Das, as Sri Krishna. He uses the imagery of Krishna to describe the Guru and the Infinite. I was reminded that what we bow to, Ik Oankar, that Ultimate Reality, is in everything. It is the ideals, the excellence, and the message of unity of all that we bow to. Just as the ink and paper of the Sri Guru Granth Sahib that I bow to is not that Ultimate Reality in and of itself, neither, of course, is an idol. The Infinity that we all bow to is brought to life with our relationship to what those things mean. So I inclined my head with hands folded toward the statue of Krishna and thought of the story of Krishna teaching the prince Arjuna of the lesson of dharma in the Bhagvad Gita. I meditated on the infinite love that Krishna is remembered for and remembered that it all comes from the same source.

Something else that I noticed at the Mandir was the religious pluralism. The line between Sikh and Hindu was blurry. Some turbaned, bearded Sikh men walked around the temple paying respect. Many people wore karas. Many people greeted me with a Sat Sri Akal. Many of the same people here probably visit the Harimandir Sahib on important Sikh holidays as well. The whole experience was a reminder of unity and commonality despite its external incongruence.

In this trying time for Sikhs in the United States, let us remember our plurality of roots. Let’s us remember the human family that we belong to. Let us remember our love and respect for that Oneness as we fight to illuminate and eradicate attitudes of division and hate.